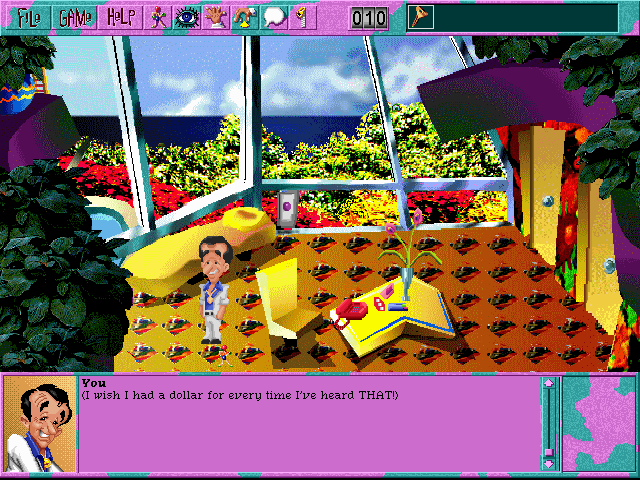 Larry 6 hails back to the form and structure of the first game, just drastically updated. The only goal? Run around and try to sleep with as many girls as possible. (Patti has been ditched completely, without so much as an explanation, which is probably for the best.) This time, Larry has won yet another contest on the dating show Stallions, which has earned him an all-expenses paid trip to La Costa Lotta, a super fancy health resort. Due to Larry’s status as a non-paying guest, the employees aren’t exactly the friendliest of people, but there are still plenty of places to visit, including a gym, a jazz bar, a pool (and accompanying bungee jumping activities), a rather nasty salad bar, a mud bath, a sauna, and a disused liposuction clinic. In most of these areas, you’ll come across one of eight women, each of whom initially wants nothing to do with you, but will eventually come around, providing you can dig up the right items. 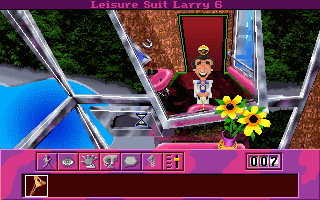 The girls this time include Gammie, the front desk clerk whose hot upper body distracts from her rather large lower body; Cavaricchi, the butch, bisexual aerobics instructor; Rose, the Spanish beauty; Merrily, a bungee jumping junkie who can only get aroused at great heights; Thunderbird, a rather scary weightlifter; Char, who spends most of the game in a mud bath; Burgundy, the saucy jazz singer; and Shablee, the hip makeup artist. Like the first Leisure Suit Larry, the ultimate girl is found holed up in the penthouse – the depressed, despondent (and clothes-hating) Shamara. Of course, luck is rarely on Larry’s side, and most of the girls are more intent on humiliating Larry than screwing him. (Do you know what a “High Colonic Treatment” is? Poor Larry doesn’t.) However, even if Larry never quite gets what he wants, he is awarded a special item for each of the girls he “wins”. Each of these items is necessary to win over Shamara, and thus the game.

The original disk VGA version’s interface uses the same fonts and menus as the older SCI0 games, in a bit of a nostalgic callback. Unlike the other SCI1 titles, which hide the icon selections at the top of the screen, the lower part is taken up by the icons, with quick access to your inventory. The icons are more or less the same as Larry 5, but now the standard “Use” command has been divided into “Use” and “Pick Up”. 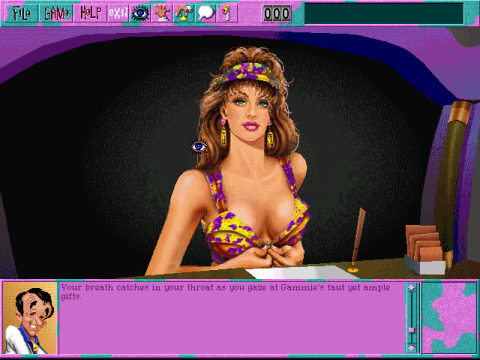 The SVGA version, only included on the CD release, changes up the interface a bit by enlarging the lower section and sticking in a text box, along with the character portraits, so the dialogue and messages no longer appear on the main screen. The inventory has been moved to the top, although the icons are rather small and a pain to see. The art style is a bit less cartoony than the previous game, but it still has a unique style.

La Costa Lotta is a garishly designed resort, with lots of clashing, loud colors, and while the SVGA graphics are noticeably cleaner, it’s still an assault on the eyes. The character sprites don’t seem to have been redrawn, looking like they’ve been upscaled with a bit of added detail, so they look a little bit off too. However, the close-up portraits of the girls look remarkably better. 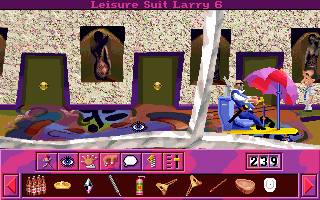 This is also the first installment to feature voice acting, most of which is quite excellent. Larry is appropriately nerdy, with a nasally whine which has just the right dose of patheticness without being annoying, and the narrator is appropriately smarmy. The acting really adds a lot of personality to the girls, too, so they feel like more than just puzzles to overcome.

Larry 6 is a marked improvement over many of the past games, just because the game world is so much richer. La Costa Lotta is a relatively huge place – it’s actually quite easy to get lost when you first start – but at the same time, it’s smaller than most other adventure games. In general, the dialogue is better, descriptions are funnier, and the Zipper icon is put to much better use than it ever had been before, even if it’s mostly used to provoke goofy responses.

Other than a few troublesome oversights, it’s mostly impossible to get stuck without the proper items, and although there are death scenes, you can immediately reverse your actions, so they’re mostly there just for fun. (Try unzipping yourself in front of the overtly gay towel attendant if you want to try playing for the other team, although it will prematurely end your journey.) Overall, it’s definitely one of the better games in the series. 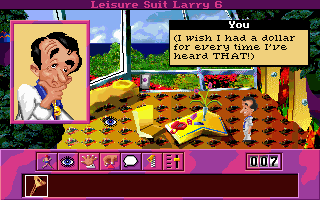 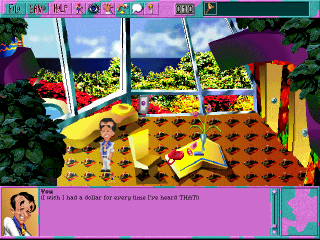