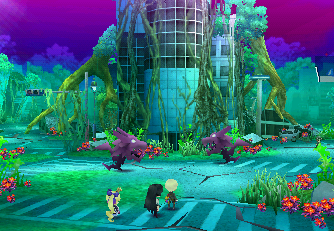 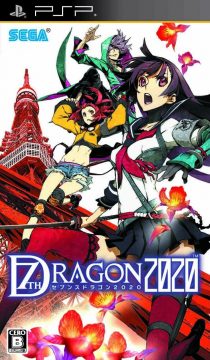 7th Dragon 2020 is a fairly significant departure from its predecessor – it changes the setting from a generic fantasy world to post-apocalyptic Tokyo, moves from the DS to the PSP, and ditches the 2D sprites for an entirely 3D graphics. The character designs are totally different. The producers at Sega have stated that 7th Dragon is planned to be a five-part series, but 7th Dragon 2020 was initially intended to be a side-story. However, as the series went on, they scrapped those plans, making this game a true sequel from a storyline standpoint, even if it’s not initially clear. 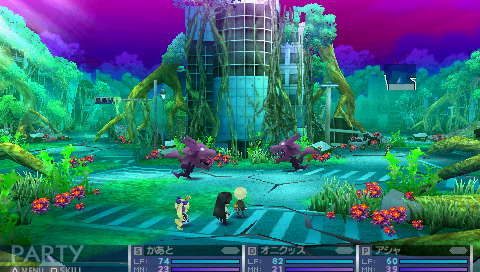 Despite the change in setting, the basic story is largely identical – the world has been invaded by dragons, bringing with them a brand of poisonous flowers. As a group of survivors taking part in a group known as Murakamo 13, you must search through the wreckage of the various districts of Tokyo to find other refugees, kill lots of dragons, and contend with a rival group of humans known as SKY.

From the outset, 7th Dragon 2020 seems to have been significantly dumbed down from the first game. The number of character classes have shrunk from seven to five. The number of playable characters in battle have been reduced from four to three. There are only two character designs for each class, a male and a female (and the Lucier race is gone), so there are only ten different avatars to choose from, as compared to thirty-two. However, you can now use the designs interchangeably, so you can use the Samurai girl as a Trickster, if you feel like it. The overworld map is now a simple menu screen, and the total number of dragons is now 200, down from 666. The combat system is fairly similar to the original, though the Synergy function is gone. The Exhaust power-up system returns, but works slightly differently, as you simply build up a power meter through attacking, similar to Limit Breaks in Final Fantasy VII, and they no longer need to be recharged by sleeping at your home base. There are also powerful, optional EX skills that can be unlocked through various steps. 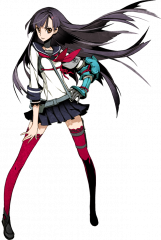 The standard fighter-type character, with the ability to heal and buff themselves, but no one else. They have two stances – Battou and Iai, which are sword fighting techniques – with different skills. 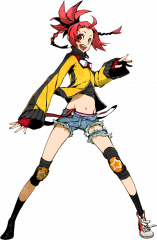 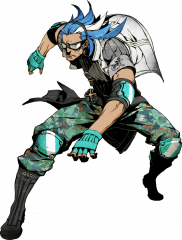 A heavy fighter, with the ability to counterattack, as well as techniques to debuff enemies. Most of their skills require that you build up a “Destroy” counter by hitting enemies with specific attacks. 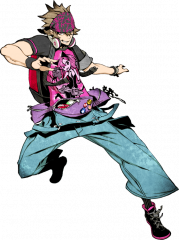 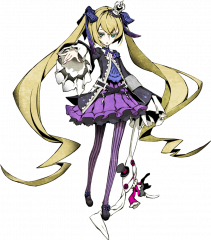 The Hacker’s main function is to act as a party buffer, increasing attacks or improving resistance to elemental attacks. They can “hack” enemies to drain their magic or make them fight each other.

This class has a bunch of handy skills, including the ability to inflict status ailments, or heal by attacking. They wield knives and guns. 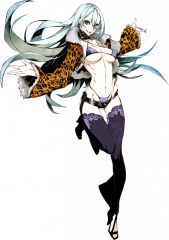 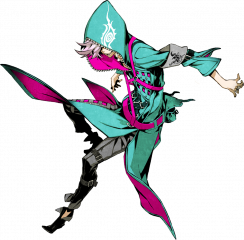 Some of these changes are disappointing, although since everything has been condensed, the pacing is somewhat faster. The areas are no longer overflowing with dragons, making their encounters less tedious, and taking on quests is much easier considering how easy it is to move from location to location. Many areas even have midpoints that let you teleport to different parts of dungeon.

In spite of some of the downgrades, many aspects have been overhauled for the better. The Quest system is far more user friendly than before, with a full log being on hand at all times, which is constantly updated as you work through them. Most quest givers and goals are even helpfully highlighted on the automap. The computer in your characters’ room will even directly guide you to the next goal in the main story, lest you lose your place or miss a trigger. There’s also now a Casual difficulty setting, and you can immediately restart battles if you die. In this manner, it’s quite a bit easier than most other similar JRPGs.

The center of Murakamo 13’s operations is the Tokyo Metropolitan Government Building in Shinjuku. While rescuing certain refugees is required to progress through the game, many are optional, and can provide both extra skills and new quests if rescued. Slain dragons also grant a unique currency called Dz, which can be used to repair the floors of the building. Adding new levels have various effects, including unlocking new skills or expanding the inventory of the shops. You can build a lounge to hang out with your teammates or go on dates with NPCs (which can grant extra items), or even soak in a bath house. It’s still not exactly Suikoden though, and the order you can build things is usually restricted based on where you are in the story, which makes it all feel rather linear and shallow. In fact, the game as a whole is much more guided, as the plot is more heavily integrated than before, even if it’s not more much more complex than “kill dragons”.

The skill system has been entirely revamped too, though it works similarly in principle. Every class has HP and MP bonuses, as well as a variety of skills which can be upgraded a certain number of levels, at the expense of SP. Since most skills max out at four or five levels, the difference between the upgrades is more pronounced than before. The skill tree is essentially gone too, as new skills are unlocked by building floors rather than mastering previous skills, which makes development less arcane. While multi-classing still would’ve been nice, it’s one of the cases where the streamlining generally makes for a better game. The classes are more balanced, and most of the skills have some use, so it’s less likely you’ll build a bad character.

The single best aspect of the game, though, is that the accursed Furowaro no longer play a large role in the game. They’re still present in the story and can be found growing throughout the levels, but they no longer have any effect on the player, removing the single largest annoyance of the first 7th Dragon.

There’s also quite a bit of fan service for the otaku audience. There are fifteen different voice sets for each male and female character, making thirty in total, most of them supplied by famous seiyuu, including Yui Horie, Jun Fukuyama, and Minori Chihara. The opening song is provided by the ubiquitous green-haired vocaloid Hatsune Miku, who also appears in a quest as an NPC. There’s also a “Diva” soundtrack option which rearranges the entire soundtrack to include vocaloid lyrics and harmonization. This is unlocked by rescuing Hatsune Miku, who’s involved in a quest that opens up in the beginning of the third chapter, and must be rescued from a dragon in Ikebukuro. When you rescue her, you can build the DIVA floor, which will in turn unlock the Diva mode. The soundtrack CD set for 7th Dragon 2020 does not include any of the Diva mode music, but was released separately around the time of its sequel, 7th Dragon 2020-II.

The shift from sprites to polygons is likely to disappoint, but the graphics are generally quite decent, mostly from an artistic standpoint. While many parts of Tokyo are simply crumbling and overgrown with flora and fauna, a few areas are remarkably cool, like the entangled web of floating railroad tracks that make up Ikebukuro.

During battle, the enemies are now fully animated and attach the screen, much like the DS Dragon Quest remakes, although your party members still appear on the playing field to attack. While the extra animations make the battles feel a little more involving, they also don’t move as quickly as before. However, the random battle frequency is generally quite low, and can be further mitigated with items and skills. While the characters still remain super deformed in battle and on the field, the artwork, now provided by Miwa Shirow (author of the manga Dogs: Bullets & Carnage) always shows them in full proportion. Keeping with the futuristic setting, the designs feel less like cutesy medieval homages and more like a Japanese fashion magazine – the female Samurai class wears Japanese school uniforms, the male Hacker and Psychic characters have an urban look that seems like they stepped out of The World Ends With You, and female Hacker is a gothic lolita. The female Trickster, with her ridiculously skimpy bikini and goofy leopard print jacket is a little over the top though. The music has an intense, electronic texture, and has once again been provided by Yuzo Koshiro. It’s not his best work, as he seems to perform better when limited to chiptune-style synth as opposed to the modern sound used here, but there are still some excellent tracks.

Given the completely different setting, the game’s story doesn’t appear to be related to the DS game. However, it actually does take place in the same world, and this game is actually a prequel – despite the fantasy setting, the first 7th Dragon actually takes place in the distant future. There are a few other connecting threads, like the existence of Emel and Aytel, two members of the seemingly immortal Hypnos race, who have a burning hatred for dragons. 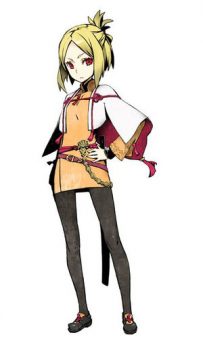 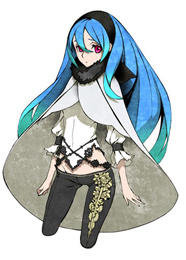 There’s no doubt that the aesthetics, combined with the scaled back design, is an attempt to make 7th Dragon 2020 feel more like a modern, accessibly RPG, rather than the intentional throwback of the first game. For the most part, it works, if mostly just because they got rid of the Furowaro, and it also feels much less like a clone of Etrian Odyssey. And yet the major issue remains, as it still doesn’t have much of identity of its own. Rather than channeling Dragon Quest, the whole setting seems to mimic Shin Megami Tensei, right down to the suspicious American politician. At its best, 7th Dragon 2020 is a decent, but not particularly remarkable RPG.

Like its predecessor, 7th Dragon 2020 was not localized, most likely due to the death of the PSP outside of Japan. However, like the original DS game, it has been fan translated by Cavespeak.