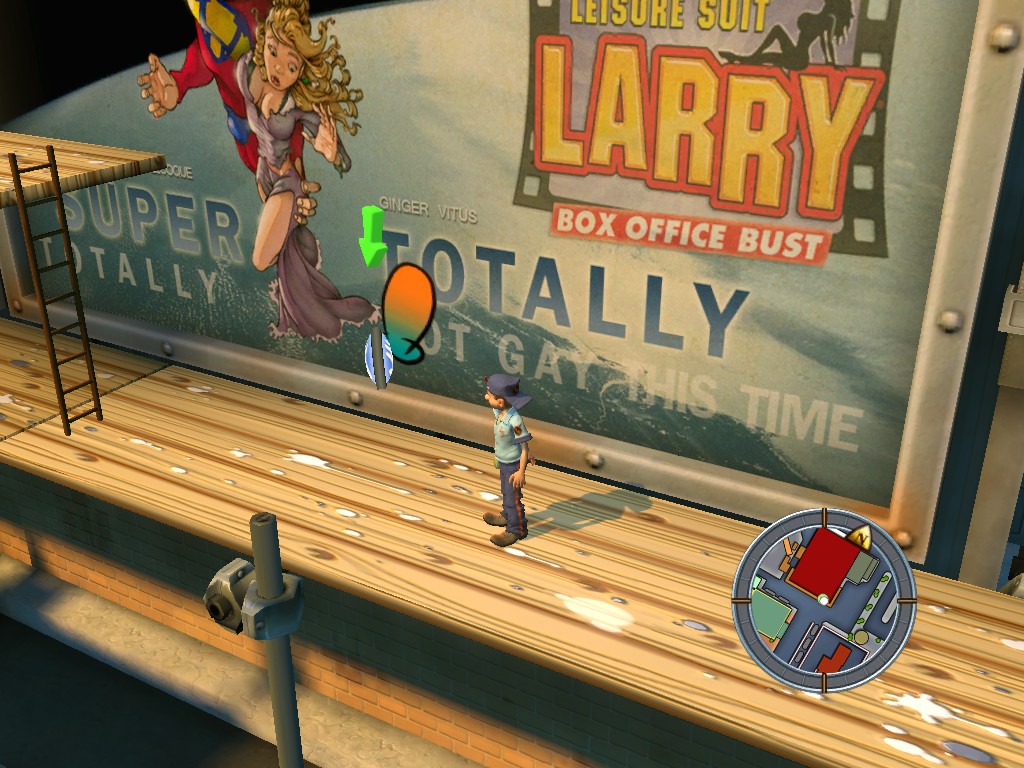 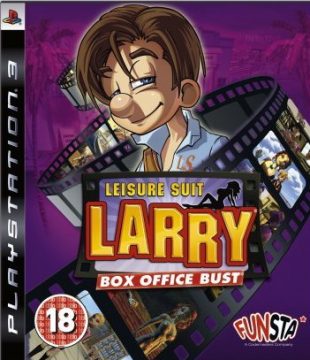 Everyone thought that Magna Cum Laude killed the Larry series, but apparently Vivendi still had plans for it when they released a trailer for Box Office Bust in late 2007, developed by Team 17. The video parodied the Gary Jules’ “Mad World” commercial for Gears of War, apparently showing off a new Larry that was going to be about riffing on pop culture and Hollywood films. After the merger with Activision about a year later, people assumed that Box Office Bust had been cancelled. And yet, in early 2009, it crept on to release lists, having apparently been rescued by Codemasters. To absolutely no one’s surprise, they should’ve left it for dead.

Box Office Bust once again puts you in control of Larry Lovage, freshly out of college and now a tremendous loser living in a trailer. Uncle Larry Laffer, now voiced by Jeffrey Tambor, apparently has created his own movie studio, but fears that there’s a mole amongst his ranks reporting business secrets to his competitor, Big Anus. Old Larry drafts Young Larry to infiltrate the ranks of his studio – first by posing as a mail boy, then later as an extra – to find the source of the leak and seal it. 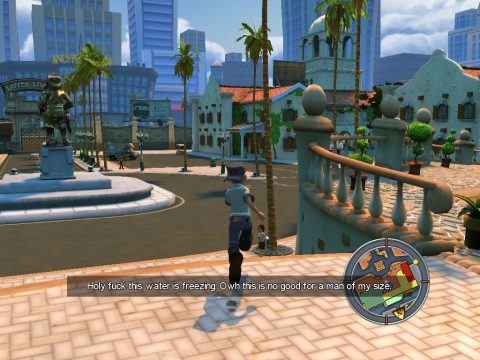 Magna Cum Laude was a huge change in the formula, but with Box Office Bust, the apple has fallen even farther from the tree. This time around, it’s an open world action-platformer, as Larry explores the studio and gets missions for different people. For the most part, these tasks involve running around to other parts of the studio, occasionally while driving a kart or under a time limit. Sometimes you’ll have to scale the heights of the buildings and jump around, collecting items and such. Other times you have to get into terrible fight sequences. There are several quick time events that involve pushing the right buttons at the right times, as well as a “directing” minigame, where you choose the most appropriate shots of a scene.

While the first portion of the game takes place solely in the studio, you eventually enter three different “dream” landscapes, based on various movie tropes: “Beefcake Mountain”, a typical Western; “Horror Coffin”, where Larry dresses up as Michael Jackson from the “Thriller” video and fights against Dracula; and “Bytanic”, with Larry taking on the role of Leo DiCaprio on the doomed boat. These provide changes in scenery, but the game’s still the same – more jumping, more fighting, more racing, more fetch quests.

Pretty much every aspect of this game falls apart. The platforming is marred by slippery controls – especially when bouncing off walls – and the camera haphazardly changes angles, often sending you flying straight towards the pavement. The fighting is awkward, stilted, and might be one of the worst implementations in any game since the PlayStation days. May God have mercy on your soul if you run out of health and need to repeat any of these missions.

Every once in awhile, an “Employee of the Month” will become available, which means there’s a girl you can try to bag. Conquering them usually requires finding a certain item and weaseling your way through a dialogue tree, after which you and your lady will disappear briefly into your trailer. This is the only moment where Box Office Bust even remotely channels the old games, but the whole experience is appalling for any number of reasons. 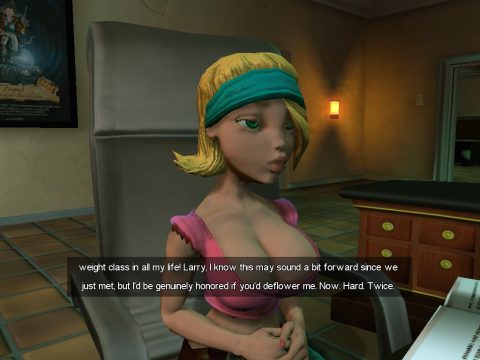 For starters? The graphics are hideous. The landscapes are okay, but the character models are routinely grotesque, with extremely malformed proportions. This is especially notable in the females, who have freakish faces and obscenely large tits. There’s no nudity, but if everyone’s this ugly, that’s definitely for the better.

But even worse than the appalling visuals, the awkward controls, and the boring mission designs is the extraordinarily painful writing. Magna Cum Laude was more vulgar than the earlier Larry games, but Box Office Bust makes that look PG-rated in comparison. Everyone tries to make jokes in every line – including Larry, who routinely talks to himself – and none of them are funny, often just relying on curse words and double entendres to get by. All of the characters are extremely unpleasant, even though the game obviously thinks they’re hilarious, like obnoxious actor Damian LeCoque (voiced by Patrick Warburton) or film executive Kip (Jay Mohr). Nikki Cox, Carmen Electra and Shannon Elizabeth also provide some voices for the girls. The “funniest” parts are the mission titles which rhyme with popular movies. How clever! At its worst, some lines are literally just double entendres strung together with absolutely no coherence. For example:

Man: Stop playing games, girl. That move ended her career. Besides we know Sanchez is indeed involved here. Oh this Sanchez is dirty and if I have to I will smear it all over the paper.
Woman: You’ll never find my Sanchez, he never leaves his mark.
Man: Oh he left his mark. I can tell you are lying. It’s all over your face.

Apparently the writer, Allen Covert, works for Happy Madison Productions, but even compared against the not-quite-stellar standards of an Adam Sandler film, this is just awful.

Box Office Bust is essentially one of those subpar licensed platformers made for kids. Except, it’s supposed to be aimed at adults, but the writing ensures that no one older than ten will enjoy any of the humor. It’s unquestionably the worst game in the Larry series, supposing you even include it in the continuity. (Al Lowe was not consulted at all, and has publicly dismissed it on his web site.) It’s also one of the worst games released in 2009. How shameful.