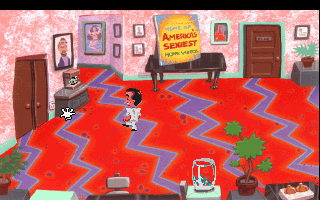 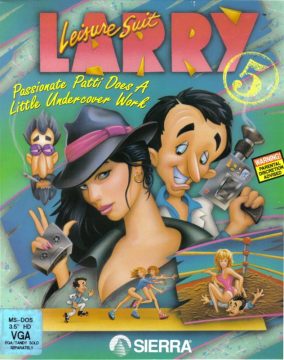 Unlike the previous game, which was split into halves, the viewpoint switches between Larry and Patti at various points. Larry has three models to visit – Michelle Milken at a computer club in New York City, Lana Luscious at a casino in Atlantic City, and Chi Chi Lambada at a dentist’s office in Miami. Meanwhile, Patti has two different offices to check out. Each character can approach their scenarios in any order, although the two storylines (and protagonists) finally converge right at the end. 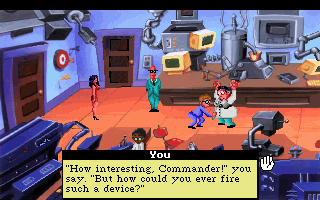 Leisure Suit Larry 5 is a bit of design experiment for Sierra, not only because of the freeform chapters, but the fact that you can’t die, or even lose the game. The lack of death scenes will come as disappointing to anyone who enjoys the black humor found in other Sierra games, although it certainly does make the game less frustrating. There are plenty of missable items that are used later in the game, but if you forgot to get them, hey, no biggie – the game just proceeds as normal. If you don’t have the items to seduce a woman, or forget to video tape them – which is the whole point of Larry traveling over the country to begin with – it doesn’t ever matter. Larry will still score with them, and the game goes on. That’s a bit of an odd approach to game design – you can never get stuck in most LucasArts games, but the items are placed in a way so that they’re always accessible, at all items. Larry 5 forgoes that, and simply makes half of the puzzles optional. Other than the point total, all it does is affect is one of the later scenes, where an omniscient voice laments on all of the things you missed.

Patti’s segments are a little less banal, but they’re just as short. She was an amusing foil to Larry back in the third game, but by herself, all she has are the same few worn out innuendos. During one of her investigations, she accidentally breaks a copy machine and gets toner over her face. She finds a shower in the next room and disrobes, only to discover that it’s actually a secret elevator, made of glass, which exposes her naked body to everyone else in the building. (None of that really makes sense, but okay.) Immediately outside of the elevator is a pair of hip hop clothes – combined with the blackface disguise, Patti can now blend in with the other rappers. You meet a group called 2 Live 2 Screw, headed by an M.C. Hammer rip-off, but they never speak to you, or do much of anything. They’re totally wasted. Patti’s other chapter isn’t even nearly as involved. You steal a record that has incriminating evidence, then you get the producer drunk, and that’s it. At least LSL5 can go down in history as one of the only games featuring a gynecological exam, from the first person perspective, no less. 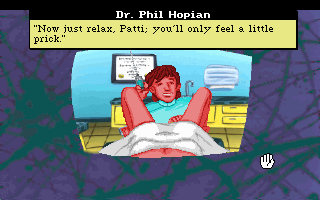 When approached from the viewpoint as a casual adventure player, the ease of the game may not necessarily be a bad thing, but the essential steps are remarkably tedious. In Larry’s adventures, you literally spend half of the game climbing out of limos, scanning your credit card, entering the copy protection code, getting in the airplane, getting off the airplane, scavenging through the airport to find spare change, looking for the ad for the local limo company, calling the local limo company, getting back into the limo, telling them your next destination, and conquering a few menial tasks. It also doesn’t help that the humor is more hit or miss this time. There are some amusing moments to be sure, but the media satire isn’t fully explored, and the encounters with the ladies just aren’t funny. At one point, Larry gets in a mud wrestling match which gets out of control and then… he goes flaccid. Not really very creative. It’s the first Larry game (not counting the remake of the first one) that uses the SCI1 engine, and features the beloved “Zipper” icon. It also introduces the bodily functions keys, which lets you burp, fart, or otherwise screw around at your leisure. And the cartoony graphics style, combined with comic book pin up artwork for the ladies, looks fantastic. But otherwise, this one is kind of a bust. 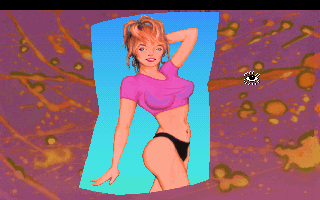 Larry 5 was initially released on floppies, but never got a talkie version. One was planned, that would incorporate a studio audience that would randomly laugh at various lines, but that never came to pass. It was later re-released on CD as part of a budget line, but it’s identical to the disk release. There is no age verification present from this game going forward, although you can choose to password protect your save game.