Softporn Adventure is a pioneer, in many ways, as one of the first commercially released adult themed computer games. It’s also a bit of a step backward for the company – Sierra made a name for itself developing text adventures with graphics (starting with Mystery House and expanding out into Wizard and the Princess, Time Zone, and more) yet Softporn Adventure is completely text-based. This was perhaps how the game was able to be released, since there’s obviously no actual nudity. (Note that Roberta Williams, one of the founders of Sierra and creator of the King’s Quest series, posed for the cover photograph.)

Anyway, you start the game next to a bar, with only one goal in mind – to get laid. Compared to Infocom text adventures, the parser is extremely poor, and the writing is routinely awful. Both written and programmed by Chuck Benton, it’s clear that he’s more of a computer engineer than a steamy fiction writer. Everything’s very straightforward and completely lacking in both sensuality and personality. When Al Lowe came in to convert the game to graphical format, he took the basic plot, structure, locations and puzzles, but invented the Larry character and expanded greatly on its sense of humor, which is how we got the first true game, Leisure Suit Larry in the Land of the Lounge Lizards. Softporn Adventure is included in many of the compilations as a bit of history.

The biggest change from Softporn Adventure to Leisure Suit Larry has to do with a garden hidden in the casino. For some reason, you can only exit it by eating some magic mushrooms, which warp you elsewhere in the game world. Additionally, in order to get an apple to give to the final girl, you’re supposed to go dumpster diving to find an apple core, plant the seeds in this garden to (somehow) instantly grow an apple tree, then take an apple. This was all a little too ridiculous, so in Leisure Suit Larry, you simply purchase one on the street. 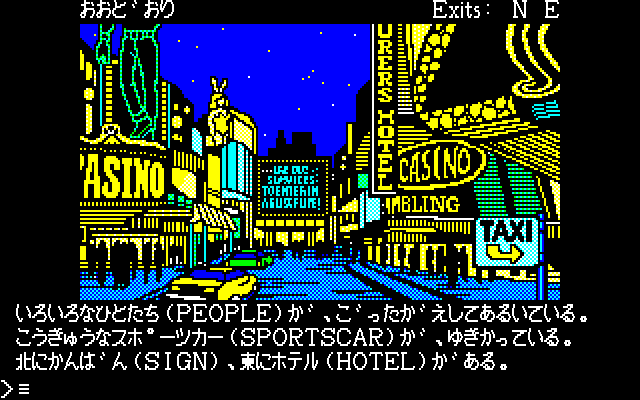 In 1987, a company called Starcraft licensed a number of Sierra games and released them on Japanese computers, often with improved visuals. In Softporn Adventure’s case, they changed the name to Las Vegas and added completely new graphics. It also runs on the same basic framework as Masquerade, another American text adventure from a different company they had translated for the Japanese market.

The core of the game is exactly the same, with the exception of some changes to monetary values. It accepts text entry in both Japanese and English too. The visuals are generally excellent, and it’s interesting to see alternate interpretations to the route Al Lowe and Mark Crowe took when creating Leisure Suit Larry. There’s actually quite a bit more nudity than most of the Larry games, actually, as the game seeks to milk the “X-rated Adventure” in its title. It’s the only version where you actually get to see the porno video that you show the pimp, after all. However, it’s still just softcore cheesecake. The other most noteworthy difference is that the convenience store owner, which is a stereotypical Indian in all of the Leisure Suit Larry games, now looks like Colonel Sanders.