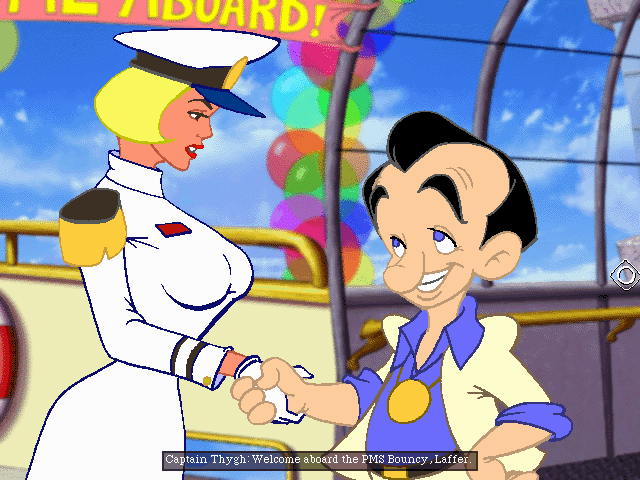 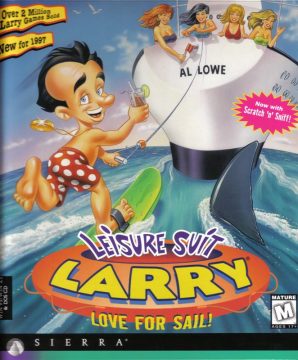 You’d have to be naive to think that Larry truly got a happy ending with Shamara at the end of Leisure Suit Larry 6. She ditches him, just like all of the others, and leaves him to burn in her penthouse, which has been inadvertently set ablaze. After escaping, Larry decides to forget his worries by taking a cruise on a ship called the PMS Bouncy, leading to more debauchery.

The opening segments don’t really bode well for the game, since it steals elements from previous Larry games – the whole tied-up-and-abandoned theme from back in LSL1, and the whole cruise thing from LSL2. And yet, Love for Sail (originally named Yank Her’s Away during development, amidst other ridiculous names) is one of the last “true” long running adventure game series that actually manages to go out with a bang, unlike other classic Sierra titles that just kinda petered out. (Not counting the later titles by Vivendi, anyway.) 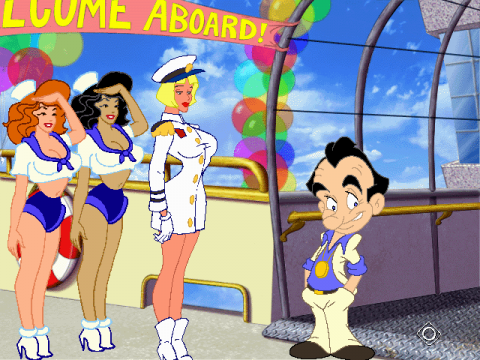 Part of the reason for this is its change in art style. Love for Sail follows the path of King’s Quest VII: The Princeless Bride and The Curse of Monkey Island by utilizing cartoony cel-style animation for all of its characters, completely dropping any pretense of reality. It’s really a shame that the point-and-click genre started to die off as technology was catching up, because this is one of its best looking games. (It also came out before 3D graphics came in and screwed things up. See also: Gabriel Knight 3 and Escape from Monkey Island.) Of course, compared to KQVII, Love for Sail is far more Tex Avery than Walt Disney. The voice acting is terrific, with the actors for Larry and the narrator reprising their roles from the sixth game, and it’s the only Larry installment to feature a fully digitally streamed soundtrack.

Also, much like its direct predecessor, it succeeds by sticking to its strengths – the chick macking. Technically, the goal of the game transcends merely picking up girls – this is a particular bizarre cruise liner, which runs a contest wherein men participate in a variety of competitions. The prize? A whole week spent with Captain Thygh, the ship’s bombshell helmswoman. (There are also pinup posters of her hung up around the ship, as an incentive for contestants.) Some of these include competitions that rank you based on your skill at craps, horseshoes, cooking, bowling, and love making (measured by a sex machine, apparently). Nearly all of the girls have porn-esque variations of movie star names, including Drew Baringmore, the nudist author; Jamie Lee Coitus, the artist; Dewmi Moore, who just loves a man who can gamble; Wydoncha and Nailmi Jugg, the mother/daughter country-western duo; Victorian Principles, the stuck up librarian who changes her tune once you give her a copy of The Erotic Adventures of Hercules (one of the many gags gently borrowed from The Simpsons); Annette Boning, the old mistress; and, of course, Captain Thygh. Also hanging around is the rotund, foul-mouthed pirate girl Peggie, who thankfully does not have any nude scenes.

Naturally, there’s no straightforward way to win any of these trials – you need to resort to creative mischief in order to beat the system. In order to win the “Best Dressed” competition, you need to get in good with Jaime Lee Coitus, the fashion designer, who will use Larry as her model, bringing leisure suits back in style, and thus (temporarily) making you the most suave dude on the block. Also, in this game, Larry’s exploits with his conquests usually work out pretty well for him, as opposed to the blue balling from LSL3 and 6 – it’s just that his clothes end up getting destroyed in the process, and he always ends up in some awkward situation when trying to sneak back to his room. It’s also actually possible to strike out with some of the women, like if you fail at the game of craps with Dewmi Moore, but getting with them isn’t a requirement to winning the game. Keeping with the theme of the last few games, there’s no way to get stuck, and no way to be killed either. Of course, it’s also still pretty damn funny – what other game can you clear a crowd by eating a bunch of bean dip then ordering your onscreen avatar to fart? Truly classy. 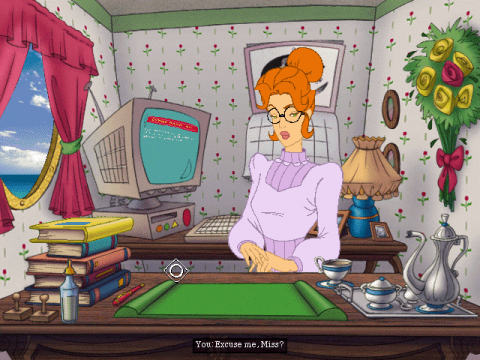 Once again, you’re given free roam of most of the ship at the beginning, and can instantly jump to any room with the help of a handy map. Your command icon is now a condom, which inflates whenever you can interact with something. The interface has been simplified to operate with a single icon – you can click anywhere on the screen to walk, but if you click on an object, a submenu pops up that allows you look at it, pick it up, use any of your inventory items on it, or otherwise interact with it. While most other games that adopted single icon systems tended to dumb down the game, LSL7 actually uses it to its benefit, since it’s much easier to use items instead of cycling through your inventory. It also brings up context sensitive actions, depending on what you’ve clicked on.

In an additional throwback to the older days, you can also type in a verb, if it’s not listed. The dialogue segments have expanded quite a bit too, allowing you to discuss different subjects instead of just talking to them over and over. You can also type in your own subjects of conversation too. Other than the tutorial segment at the beginning of the game, you never really need to use the text parser, but it’s necessary to unlock hidden scenes and other Easter eggs. (The game also has an amusingly bizarre obsession with milking beavers.) 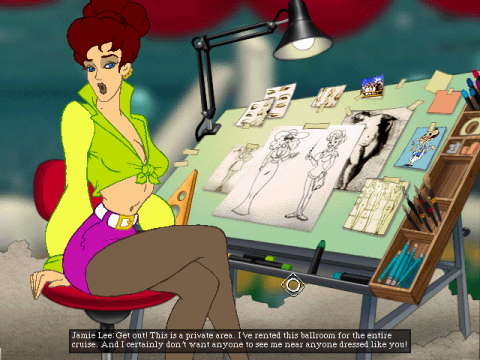 There are also a couple of other halfway clever devices, including the ability to insert a picture of yourself in the game, which shows up as a poster. (By default, it’s a pic of Al Lowe.) The retail game also includes a scratch and sniff card – at various points the “CyberSniff 2000” pops up and asks you to scratch off a certain spot, in order to fully immerse you in the experience. The disc art is actually pretty hilarious, with the spindle hole being placed in the middle of Larry’s crotch, who has a rather distressed look on his face.

Love for Sail really is the epitome of the series – it looks fantastic, it’s well written, it has a bunch of hidden stuff, and sidesteps any of the frustrations of most adventure games.