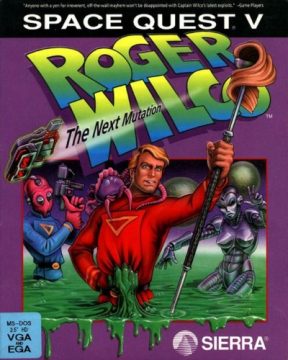 It took him a total of three games, but Roger finally found his way home to Xenon after the conclusion of Space Quest II. Apparently finding little purpose in being a janitor, he enrolls in the StarCon Academy, where he still spends most of his spare time napping in the closet. After attempting to take his final exam, a freak glitch in the computer grading system promotes him to Captain and awards him his own vessel. It’s technically just a garbage scow, complete with a crew that more or less hates his guts, but it’s a step up from mopping floors, right? 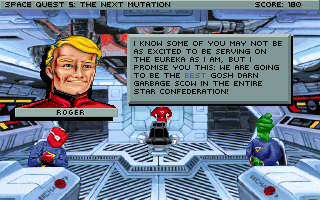 The trouble begins when Roger intercepts a transmission from Commander Raemes T. Quirk and Ambassador Beatrice Wankmeister, the woman whom, according to Roger’s son back in Space Quest IV, will eventually bear him children. Their ship has been attacked by a militant group of deformed mutants called Pukoids, who wish to inflict their own terrible fate on the rest of humanity. Naturally, it’s up to Roger and crew to not only save the galaxy, but woo Miss Wankmeister and prove that he’s more than just a lowly screw-up.

Like Space Quest III, you get to take control of the starship from the commander’s chair, which makes a rude noise every time you sit on it. There’s a bit more freedom here, with a slightly larger galaxy, although navigation requires referencing the faux tabloid included with the game, acting as copy protection. Space Quest V introduces the “Command” icon – a speech bubble with an exclamation point – used for issuing orders, although they’re mostly restricted to your crewmembers and the teleporter. The “Smell” and “Taste” icons are sadly absent. 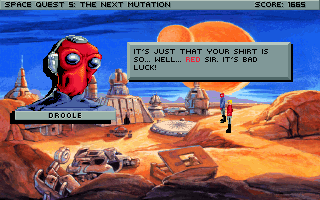 Space Quest V feels remarkably different from its predecessors, for a number of reasons. For starters, it was developed by the team known as Dynamix, who had been acquired by Sierra a few years before. They were known for other adventure games like Heart of China, Rise of the Dragon, and The Adventures of Willy Beamish, but it was their first (and only) title using the SCI engine. The difference is most notable in the art style, which has changed from the other VGA games. It has more of a retro comic book feel, which fits in with the cheesy sci-fi theme.

Additionally, the design rested solely on Mark Crowe. Scott Murphy and Josh Mandel also had little to do with the game, and their absence definitely makes an impact. Space Quest V is still funny, but it’s lacking much of the biting sarcasm – and freakishly dark deaths – that made the previous games so amusing. But the biggest bummer is that Space Quest V was never released on CD, so there’s no voice acting, outside of a few brief sound clips stolen from The Simpsons. 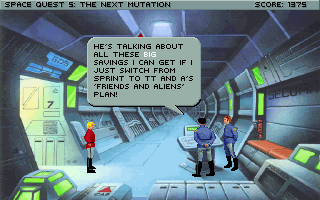 Even though it’s not quite as funny, Space Quest V almost makes up for it in other areas. The narrative is much more focused, and it feels less like Roger is simply stumbling through various situations until the game decides to end. Speaking of which, Roger is now a much more fleshed out character. In the previous games, Roger only spoke a few lines, with much of the humor coming from the narrator, but here, our hero comes off as a clumsy, yet well meaning and likable guy. The secondary characters – sarcastic pilot Droole, man-hating Flo, and cranky engineer Cliffy, and even nemesis Captain Quirk – all have more personality than is typical of the series.

The whole game is obviously a pretty huge Star Trek parody, mostly because The Next Generation was popular at the time. The first task is to pass the academy final exam (which Roger hasn’t studied a bit for, of course) and some of the multiple choice questions are quite chuckle-worthy, even if it’s not as hilarious as the bargain bin from Space Quest IV. If you wander through the halls of the academy long enough, you can find Obi-Wan and Darth Vader dueling in the distance. If you pay attention to various screens, you can find animated versions of classic arcade games like Missile Command and Pong. It also features some outdated references to telecommunications company Sprint, who sponsored the game. You overhear some guards talking about switching telephone plans, and all communications aboard the ship end with the Sprint logo. At one point, Roger is transformed into a fly in order to infiltrate an office, and in another, he hops into the seat of a 2001-style EVA pod to rescue Cliffy, who has accidentally fallen out into space. 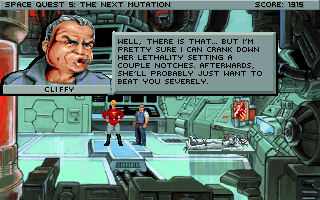 Later still, you adopt an Alien-style facehugger whom Roger lovingly names Spike. There’s also another run-in with the killer bounty hunters from the Gippazoid Novelty Company – they’re still angry about the mating whistle from Space Quest II, and further infuriated by the destruction of the Arnoid from Space Quest III. This time, though, it’s a female, unintentionally foreshadowing the third Terminator movie. This move is either halfway clever or creatively lazy, depending on your viewpoint, but at least defeating her is less frustrating than the similar encounter way back in the earlier game, and after being reprogrammed, she becomes part of your crew. The action segments are generally minimal, and even the minigame – an overly long game of Battleship against Captain Quirk – is optional. Overall, it’s a much better designed game than its predecessors, and while though it’s not nearly as off-the-wall as some of the others, Space Quest V is still another fine adventure.

Laura Bow in: The Dagger of Amon Ra
Night mode