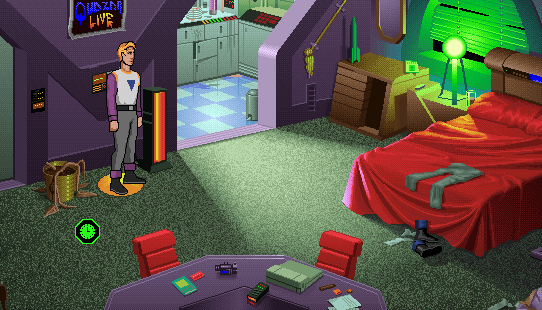 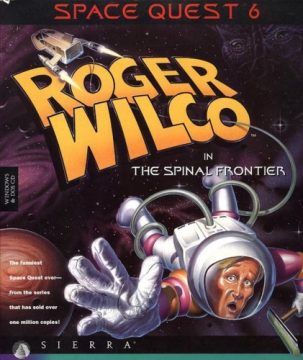 Even though Roger saved the galaxy (again) at the end of Space Quest V, his violation of several StarCon regulations leaves him to be stripped (literally) of his rank. Furthermore, there seems to be some kind of conspiracy to kill Roger, as he’s kidnapped while on shore leave. He’s saved by his companion, Corpsman Stellar Santiago, who seems to have a thing for him, but Roger insists on remaining loyal to Beatrice, who doesn’t actually appear in this game. Roger begins to question these feelings after Santiago sacrifices herself to save him during another attempt on his life. Eventually he discovers that she’s still alive, somewhere, and sets off on an adventure to rescue her. When he finds her, he can only save her by miniaturizing himself and diving inside her body. The Incredible Journey-style setting of the final chapter is where the game gets its subtitle, The Spinal Frontier, although the working title was Where in Corpsman Santiago is Roger Wilco? 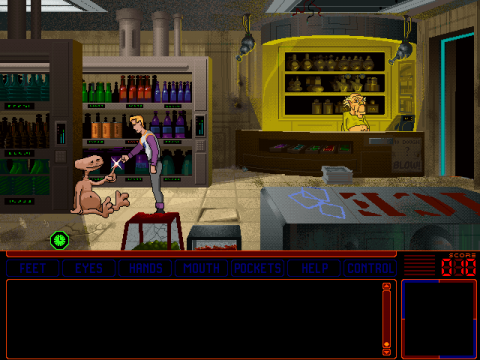 The sixth and final Space Quest game features SVGA graphics, with cleaner visuals and the occasional computer rendered animation. That being said, neither the artwork nor the animation quality compares with King’s Quest VII. While the backgrounds are crisp, they’re too sterile compared to the hand painted visuals of the previous VGA games, and while they may work as a sci-fi setting, they’re a bit dreary for something that’s supposed to be a comedy. Some of the character artwork is decent, but the artwork for Roger and Stellar are pretty ugly. Other than a few close-ups in key cutscenes, the portraits during dialogue are missing, which creates a disconnect between the characters and the player. The interface now takes up the bottom quarter of the screen, leaving the view a bit more cramped than usual.

There are still a bunch of amusing parodies and throwbacks to previous games. You’ll find a drunken ET sleeping in a liquor store, who will happily show you his glowing finger, if you try to talk to him. (You can also pull his finger for expected results.) You’ll come across a shady Blade Runner-style character who’s too lazy to do his own job, and an Alien-like creature stalking a lone female spacefarer. There’s a minigame called Stooge Fighter 3, featuring Lar Man, Coiley Joe, and Big Mo. And unlike other Sierra minigames, it realizes that it plays poorly, and the only way to win is through cheating. One of the most amusing screens is the theater marquees that change every time you re-enter the screen, which consist of over several dozen parody titles. And “cyberspace” in the Space Quest universe apparently consists of little more than a variation on Windows 3.1. You’ll run into a drunken Elmo Pug, the wiener kid from ScumSoft, as well as Fester Blatz the shopkeeper, both from Space Quest III. Roger even keeps some of his mementos from previous games in his quarters, and there are some amusing references to both that stupid owl Cedric from King’s Quest V and the cheesy love ballad from King’s Quest VI. Roger’s commander, the anthropomorphic lion Kielbasa, may as well be a Kilrathi – albeit a friendly one – from Wing Commander. And your ship, the Deepship 86, looks like a giant flying jockstrap. 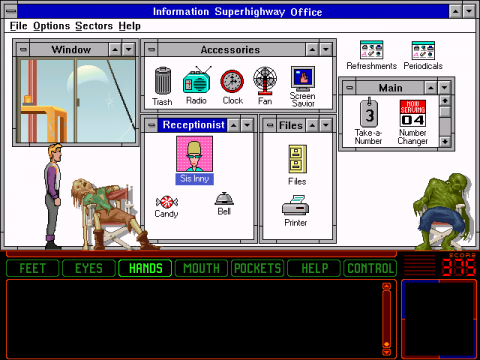 These moments are amusing, but the plot is a bit on the dark side and more dramatic than the previous games, which never took themselves seriously. The writing style, too, while very funny, isn’t nearly as biting. Gary Owens returns as the narrator, but he’s not quite as condescending, so his lines just don’t sparkle the way they used to. There aren’t any particularly amusing death scenes, either, although you’re now given the option to “Try Again” after dying.

It also doesn’t help that the puzzles are some of the most convoluted of anything in the series. Many of them feature numerous tedious steps and involve picking at nearly everything in the scenery to see if you can interact with it. Some of the usable items are so small or so hidden that you can often get stumped just because you couldn’t even see it. This is particularly bad at the beginning, where you’re not given any real direction. 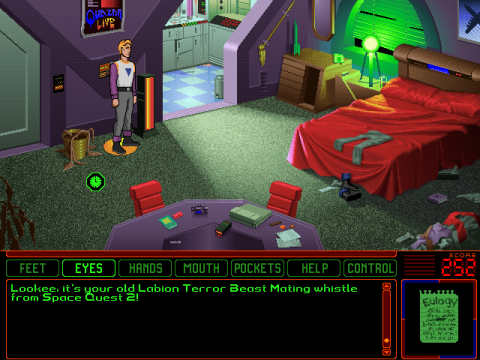 One of your first tasks is to capture an escaped android, who’s hiding at the bottom of a bar. You need to freeze him with a blast of nitrogen, like the T-1000 in Terminator 2. You can’t just go up to him and use it though. Instead, there’s a tedious series of steps to run the ice blast through a series of pipes. At one point, you need to solve a puzzle by taking apart an electronic device, replacing some chips, and flipping some switches. There was supposed to be a comic book strip in-game to tell you how to do this, but it was removed from the final product. Instead, it was printed in the manual leaving many to believe it was copy protection. Furthermore, some copies of the game, including many of the compilations, don’t come with the necessary documentation, requiring that you use a FAQ to complete it. And this is just in the first area of the game! The final sections in Stellar’s body are just as frustratingly designed.

Space Quest VI is a decent but not outstanding game, one that probably could’ve used some polish. Perhaps this is due to a result of management issues – a large majority of the game was designed by Josh Mandel, who left the project before completion, leaving Scott Murphy to pick up the pieces. 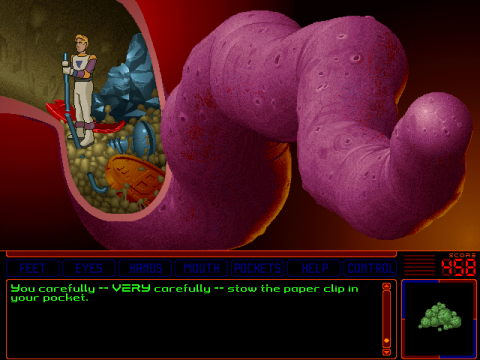 Before Space Quest VI was released, Sierra created a demo for distribution on promo CDs. Unlike most of their demos, this one is not only playable, but consists of a storyline that didn’t exist in the full game. The evil Bjorn (parodies of the Borg from Star Trek) have invaded the Deepship 86 and turned everyone, except Roger, into piles of sorbet. 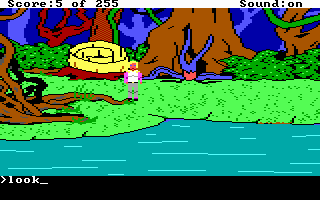 Sierra games have inspired a whole slew of would-be game developers to try their hand at their own adventure titles, including Space Quest: The Lost Chapter and Space Quest 0: Replicated. Both run on the AGI engine. Space Quest: The Lost Chapter takes place between Space Quest II and III, as Roger’s escape pod crashes on the surface of another jungle planet. Although some of the sprites show improvement over Sierra’s games, the puzzles are absolutely infuriating, and the writing could’ve used some serious polishing, as it’s filled with spelling errors and grammatical issues. It’s an amateur effort, and it shows. On the other hand, Space Quest 0 shows quite a bit more professionalism. It begins much like the first Space Quest game, with Roger being the lone survivor of a brutal invasion, and escaping with his life. In his adventures, he needs to track down the mysterious blue skinned alien chick that he sees at the beginning. The puzzles are much more logical than even Sierra’s better games of the era, and the plot and locales, while hardly original, are still pretty decent. 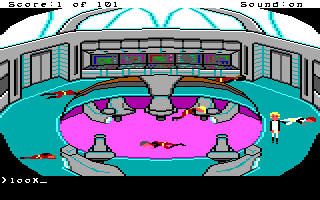 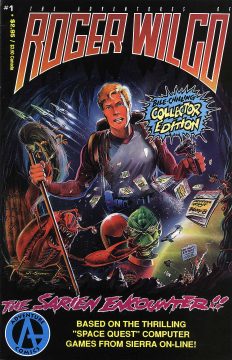 Roger Wilco was briefly the star of his own comic book series, published by Adventure Comics. The three issue series is vaguely based on the first game, although the events are drastically reinterpreted. The first issue is in color, but the other two are only in black and white. 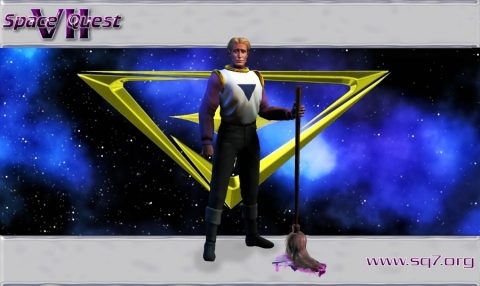 One of the Space Quest compilations promised an exclusive look at Space Quest VII, which was intended to be a multiplayer game. Alas, according to various financial and management issues, the game was cancelled before it got very far off the ground. Years later, after Vivendi Universal bought Sierra, the new management attempted to resurrect some of their old properties. The only game that was released was Leisure Suit Larry: Magna Cum Laude, which was underwhelming. Looking at this example, it’s a good thing that the intended Space Quest game was cancelled, because it probably would’ve been a bastardization of the original series.

Take-A-Break Pinball is a Windows-based pinball game developed by Dynamix. All of the tables are based off Sierra/Dynamix properties, including Kings Quest, Stellar 7, Willy Beamish and of course Space Quest. There are three Space Quest tables, all based on various locations from Space Quest IV. 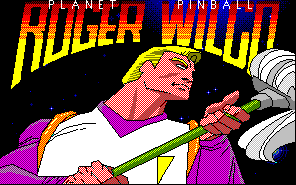 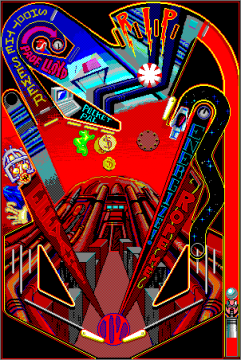 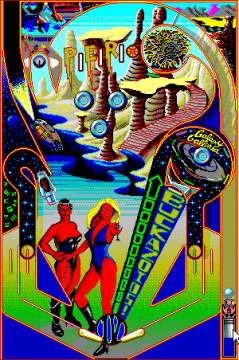 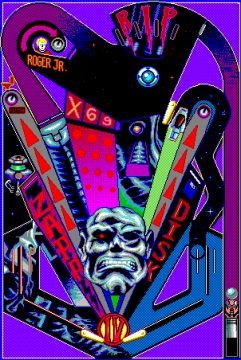