Released two years later, Dragon Saber: After Story of Dragon Spirit improves on nearly every aspect of the original. The setting has been changed from a mythical one to a futuristic one, and the graphics are subtly better, making sparse use of scaling and rotation effects (one level begins as your dragon descends into a canyon – very cool), although not as much as Phelios, another shooter that also runs on the Namco System 2 board. The music is just as catchy, if not better. Namco was even kind enough to include arrangements of several themes from Dragon Spirit, which are accessible through a code. It was also composed by Shinji Hosoe, and some of its music appears in Taiko no Tatsujin 9 (one of the many Japanese releases of Taiko Drum Master.) 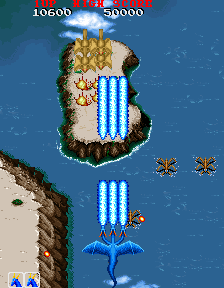 New to Dragon Saber is a two player simultaneous mode – the dragons you control are Huey and Siria, and there’s a similar transformation sequence when you first start. Your dragons are now also equipped with a power shot, which charges up automatically as long as you’re not firing. You can also hold down the fire button for a rapid shot. Your fire power can also be upgraded with a single red orb, instead of three. There are several new transformations, including an ice dragon, a lightning dragon, a fire dragon, and a steel dragon, each with their own unique (and powerful) charge shots. The arcade game allows for a maximum of five hit points (three in the PC Engine version), but it’s doubtful any arcade operator set it that high, as you can only take a single hit on the default setting. Dragon Saber still uses checkpoints, but you’ll resurrect instantly if you’re playing with a partner, so it’s a little easier in that sense. In general, the game isn’t quite as rough as Dragon Spirit, but it’s still plenty challenging. 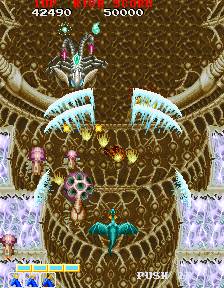 The stages are a bit shorter, although there are still nine levels altogether. In addition to standard prehistoric, volcanic, and glacier stages, there’s an HR Giger-themed level, complete with Alien-like facehuggers that leap out of eggs into the sky; a futuristic castle, complete with gun turrets, pulsing red lights, and laser beams; and a Life Force-style organic level, with creepy blinking eyeballs that emerge from the fleshy surface, and vicious enemy blood cells. In the fact, the influence from Life Force / Salamander is incredibly apparent in the first two bosses – one is a gigantic eye on a stalk, emerges from some kind of brain-like material, the other is a huge fire dragon, both of which resemble the first and third bosses respectively from Konami’s classic shooter. Much like Dragon Spirit, there are nine stages, so it’s a fairly long game. However, there’s an invisible time limit against the last boss – if you take too long, it’ll escape and you’ll lose the entire game, without so much as a “bad ending” cinema. 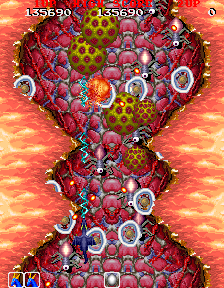 Despite fixing nearly every issue from its predecessor, Dragon Saber isn’t nearly as recognized. Its only port at the time was for the PC Engine in 1991, which was only released in Japan. It’s a good port, although its graphics and music have been compromised a bit more compared to the first game. It’s also a bit easier, It was later ported to the PlayStation as part of the Namco Museum Encore anthology, which, again, was only released in Japan. This version is more or less a straight port of the arcade version. Strangely, none of the following anthologies feature Dragon Saber either. 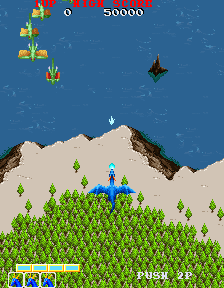 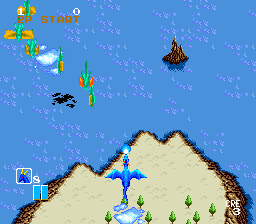 Released in 2002 for the Wonderswan, Namco Super Wars basically takes Banpresto’s famed Super Robot Wars series, and replaces the different mecha with characters from different Namco games. You play as a character named Chronos who travels to different Namco games and seeks out their heroes to do battle. Some characters include Ki and Gil from Tower of Druaga, Clovis from Dragon Buster / Valor, Valkyrie and Xandra from Legend of Valkyrie, Apollon and Artemis from Phelios, Mappy and Dig Dug from their respective games, and several others. Amul, the hero of Dragon Spirit, also shows up as a playable character, and one of the worlds you venture through is Mitgult. Most of the time he’s in human form (and vaguely resembles Marth from Nintendo’s Fire Emblem series), but he can transform into the Blue Dragon too. Other characters from Dragon Spirit include Alicia the Princess and Aria the Sun God, the diety whom Amru prays to in order to transform. The game is essentially a predecessor to the PlayStation 2 game Namco × Capcom.