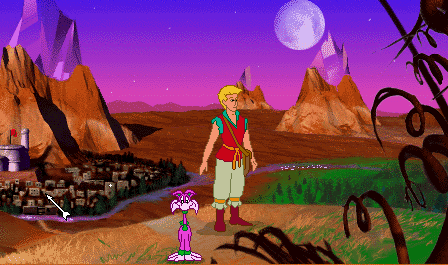 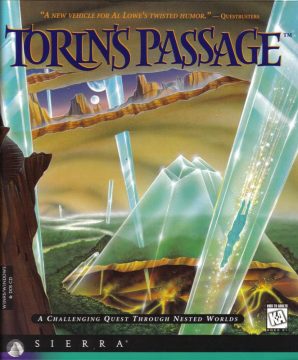 Torin’s Passage, a cartoonish fantasy adventure released late in Sierra’s adventure gaming life, was conceived as a counterpart to the King’s Quest series. Due to the increased time and effort to create cinematic CD-ROM games, Sierra realized they couldn’t keep churning out King’s Quest titles at a yearly rate. Their solution was to create a similar series and release each on alternating years. But Torin’s Passage is not merely a stopgap title – it’s quite an excellent game that has the tragedy of being somewhat overlooked, or at least misunderstood by the gaming community. 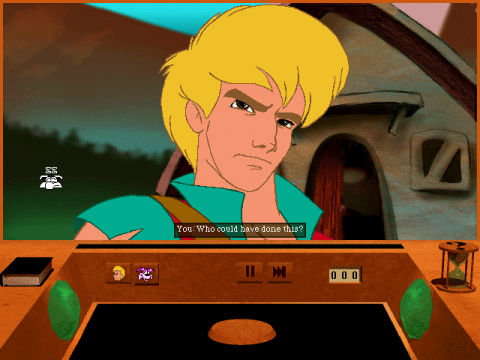 The packaging has Al Lowe’s name on the cover, but it’s not quite what you’d expect. In a departure from his usual adult-oriented games like Leisure Suit Larry and (to a lesser extent) Freddy Pharkas, Torin’s Passage was developed to be a game that Lowe could play with his daughter, and thus a title that the whole family could enjoy. It’s not entirely without precedent – Lowe began his game development career working on Disney titles, including The Black Cauldron for Sierra, and in many ways he’s simply to returning to his roots.

The story focuses on a young farm boy named Torin, who lives on the world of Strata. His life is tossed into disarray when his caring parents are whisked away by the evil sorceress Lycentia, causing him to set off on an adventure to find them. Torin’s unique world consists of several realms nested within the planet’s crust – he lives on the surface, known as “The Lands Above”. As you go further underground you venture through new realms, each with its own theme, and its own group of strange denizens. Each trip brings him closer to Lycentia, who has been banished to the core of the planet in a place known as the Null Void. Torin is joined by Boogle, the requisite goofy sidekick. As is typical of these types, he walks the thin line between “cute” and “obnoxious”. He can’t talk, but instead can shapeshift into various items that he comes across. 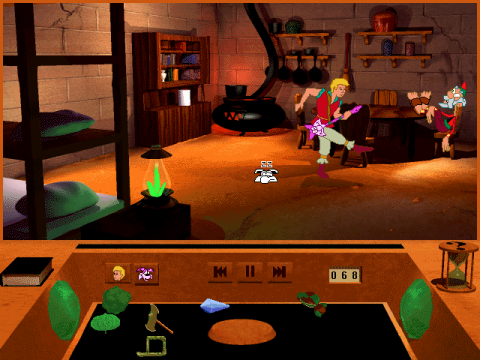 What Torin doesn’t know is that he’s actually the son of the King and Queen, who were murdered when he was just a baby. Purportedly, their deaths took place at the hands of Lycentia, who was their nanny, and her banishment to the planet’s core was a result of these misdeeds. However, Lycentia isn’t quite as evil as her initial appearance may suggest. Her story is told through flashbacks in-between the chapters, which reveal she actually rescued Torin from being killed as well, and she was simply used as a scapegoat for the death of the royal family. She is a rarity even amongst Disney films – a sympathetic villain. 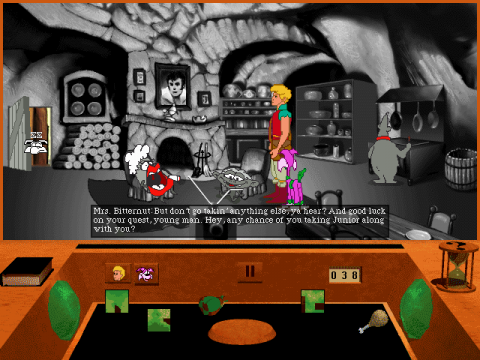 While Torin’s Passage uses the same basic interface and style as King’s Quest VII, it’s substantially improved in a number of ways. Most welcome is the return of the speed control function, absent from KQVII. Players of that game will remember how painful it was to watch the characters slowly slog across screen after screen, but Torin happily dashes along, and can even be instantly teleported to spots via the right mouse button. The subtitles have returned too. Alas, some of the more unfortunate elements of King’s Quest also remain. Torin’s Passage still uses the single icon cursor, and you can only interact with essential items. There isn’t any narration either, robbing the experience of much of the flavor text that characterizes Sierra’s better games.

Still, at least the game looks fantastic. The painted backgrounds are gorgeous, and the character designs capture the look and feel of the best animated flicks without relying on too many standard Disney tropes. While the adventure sequences look like standard Sierra games in high res, there are numerous close-up cinematics during the dramatic scenes. They’re rendered in-game, so they don’t suffer from the compression artifacts of full motion video, and they’re well animated too. While Torin is a fairly generic blond fantasy hero, the rest of the characters are appropriately exaggerated, with the most amusing being Dreep, Lycentia’s hulking goon. He’s technically quite dangerous, in that he can eat Torin in a single bite, but he’s so damned goofy looking, with his large blue face and gigantic red nose. It’s like something that crawled out of the imagination of Jim Henson, making it hard to find him threatening. 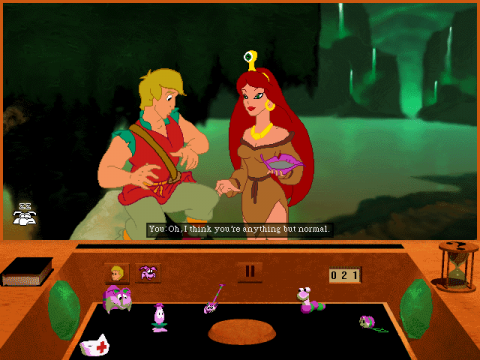 In general, Torin’s Passage has a lot of energy. The first world has a tree which Torin will leap across, complete with showy acrobatics. The various worlds are far less derivative than what you’d see in a typical King’s Quest title, and the writing is better too. Roberta Williams’ sense of humor was always kind of genial – if it made you laugh, it probably made you groan at the same time. Torin’s Passage is much more creative and inspired, and much sillier to boot.

The gateways between the realms are known as phenocrysts. While many of the puzzles are typical Sierra inventory types, these gateway areas contain logic conundrums, closer to The 7th Guest. However, they are quite a bit simpler. The command bar also comes with a built-in hint function. You can set how often you’d like hints to be available, or just turn them always on, but using them will also deduct a few points from your score. Sometimes they’ll outright tell you the solution, but for the phenocryst puzzles, they usually just give vague suggestions. 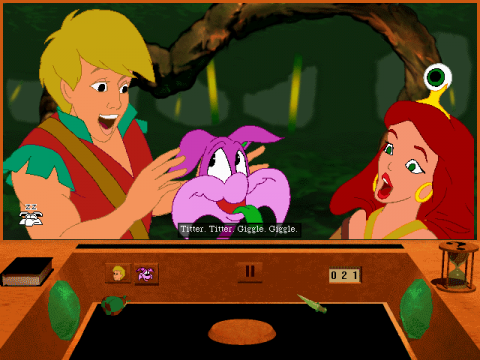 The world design is quite well done. The adventure gets off to a good start taking place in The Lands Above, which seems stuck in a perpetual twilight but is no less gorgeous because of it. Escarpa seems to take inspiration from American Indians, as the residents have their homes built in the side of a gigantic canyon. Alas, things stumble somewhat during the mid-game – Pergola is a forest where Torin is captured, Gulliver’s Travels-style, by a race of tiny creatures, while Asthenia is a standard volcano world. Both feature consistently excellent artwork, but Pergola focuses entirely on solving stupid little puzzles by moving around the miniature cretins, with little to explore, while Asthenia has no character interaction whatsoever. Thankfully, the story picks up in the final chapter in the core world of Tenebrous. For all of the talk in-game of how depressing this world is, it’s not all that dark. Half of it takes place in a bright pleasant forest – the other half takes place in the backstage of a theater, where you get to interact with more of the land’s bizarre residents.

Anyone expecting a comedy adventure in the style of Lowe’s other games will probably be a bit disappointed. The humor is less about verbal wit and more about plain silliness – after all, it is mostly aimed at kids. That doesn’t mean there aren’t any swell bits though. Out of all of the strange folks you run into, the weirdest are the Bittermans, a family of odd creatures who appear to live inside of a ’50s sitcom. Their entire existence is black and white, their actions are introduced by a cheesy narrator, and every stupid “wife loudly nagging the helpless husband” joke or cheeky retort from the bratty kid is greeted with canned applause. In Asthenia, if you fall into the molten rock, Torin will sink while giving a thumbs-up, a reference to the finale of Terminator 2. 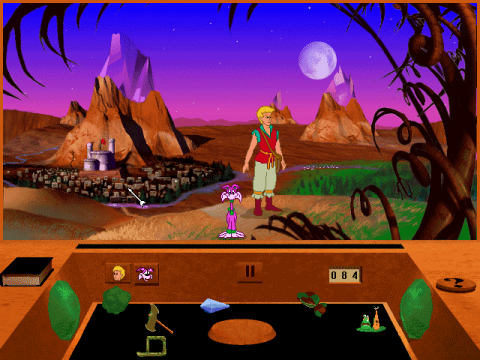 There are some funny fourth wall breaking gags too. Upon entering Tenebrous, Torin is knocked unconscious, and the player is put in control of Boogle. Upon transforming himself into a sexy nurse, he reaches right into the inventory window and picks up the ammonia to revive Torin. And after crawling through a series of vents, Torin accidentally bumps into the command bar at the top of the screen, which he kindly asks that you take care of. When stuck in the gravity-less Null Void, Torin propels himself through space with a set of bagpipes. And the final “puzzle” of the game involves using a specific item on Lycentia in her room. The solution is more than obvious, but you can also use the bagpipes to alert her to your presence and get yourself killed. It’s such a monstrously stupid thing to do that the voice of Al Lowe himself congratulates you for being such a moron. 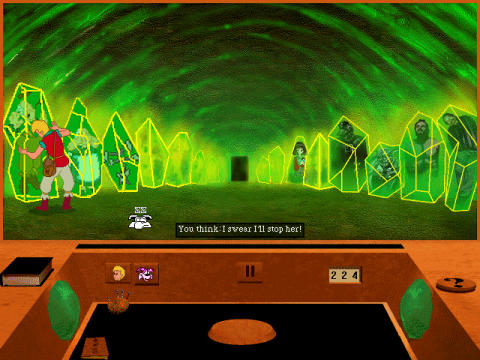 While there’s a lot to like about Torin’s Passage, it feels like something’s missing. Not in the same way as King’s Quest VII, which was clearly unfinished, but Torin’s Passage was obviously meant to be the first part in a larger series that never transpired. There’s not much of a plot beyond “Torin goes on adventure, discovers secret heritage.” A love interest, the strikingly beautiful Princess Leenah, is introduced halfway through the game, and other than some not-so-subtle moments of lustful tension, there’s absolutely nothing done with the couple. She doesn’t even appear in the ending. As a prelude to the greater adventures of Torin, it would have been excellent. As a standalone title, it’s still quite good, but it’s not quite fulfilling either.