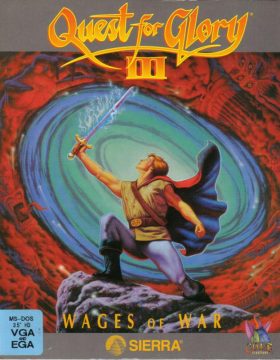 The developers originally intended to continue the Quest for Glory series with Shadows of Darkness, which would’ve taken place in the Translyvania-esque land of Mordavia. They put these plans on hold though, with the release of Wages of War. (Apparently the Coles had planned to rerelease the game under the subtitle Seekers of the Lost City.) This time, our hero visits the land of Tarna, the homeland of Uhura and Rakeesh, the residents of the Adventurer’s Guild in Quest for Glory II. Fricana is much like Africa, although it is ruled primarily by lion-like creatures called Liontaurs. The Liontaurs rule the nation, which is also the name of their capital city. As you and Rakeesh return, you learn of a mounting war between the human Simbani tribe and the apparently evil Leopardman. Obviously, things aren’t as they seem, and it’s up to you, as the hero, to find a way to avoid a bloody and unnecessary conflict. 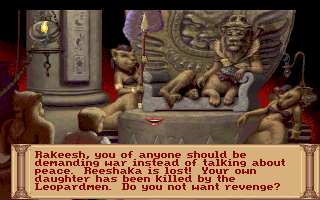 Quest for Glory III uses the same SCI1 interface as the Quest for Glory I remake, with mostly identical commands, although the graphics are a bit better. However, it feels much smaller than either of the previous games. The bargaining interface is now a bit more advanced, allowing you to give specific offers to merchants, and you can now click the mouth icon on yourself for more dialogue options, including greeting characters and telling them about your adventures. There’s also a handy autosave, too.

Outside the city of Tarna lies a huge savannah and a jungle, making up the land of Fricana. Travel is accomplished via an overhead map, complete with Indiana Jones-style dotted lines that trace your hero’s steps. The game world is only four screens long and time passes quickly as you travel. You can now camp anywhere in the savannah, as long as you have a source of fire (either the lame dart spell for magicians, or a tinderbox for any other class). Outside of the first couple of days, the game does not run under any schedule a la Trial by Fire, so you’re free to take your time on your quest. The music takes on a tribal African feel. It works some of the time, but it’s usually just pretty grating, particularly because the prevalent use of percussion just doesn’t sound right on most MIDI outputs. There are a variety of combat themes, but none of them are particularly good. 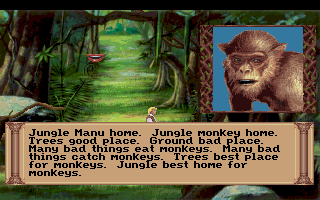 Battles still occur randomly on the world map, but you’re given the opportunity to run away before conflict. The fighting is pretty terrible too, arguably the worst since the original EGA Hero’s Quest. The viewpoint is similar to battle scenes from the Quest for Glory I remake, but the camera has been positioned at waist level behind the hero, giving a more dramatic perspective on the action. But neither you nor your enemies seem to react whenever they get hit, and there aren’t any sound effects to indicate damage, it makes you both look like you’re flailing randomly at air, all while the HP and stamina meters are mysteriously dropping. Like most of the other games, you can still win just by spamming the attack commands, and at least you regain a bit of stamina if you hold off attacking.

For a good portion of the game your quest feels pretty aimless. Most of the adventure revolves around simple fetch quests, none of which require any effort or ingenuity. You also can’t advance any events until the Simbani capture a Leopardman. The problem is, this event is triggered by completely unrelated tasks, leaving you to stumble around until the game finally decides you can move on. But once that happens you’re basically entering the second half. Quest for Glory III is fairly short, and the resolution of the plot isn’t particularly interesting either. It doesn’t help that there doesn’t seem like there’s a whole lot to do. There’s a ritual initiation for the Fighter, and a staff building quest for the Magician, but there’s almost nothing for the Thief. In fact, there’s no Thieves Guild, no houses to break into, and only a few cases where your skills are of any use. 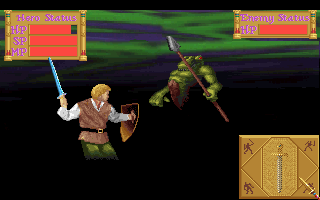 If you’ve imported a character from a previous game, you can also choose to be a Paladin from the outset. The Paladin is more or less the same as the Fighter, but there are a few extra quests that grant additional abilities, like a flaming sword to deal extra damage, or healing magic to cure wounds. You also need to act properly in order to increase your Honor and Paladin statistics, and run various subquests. Some of these are interesting – at the beginning of the game you help catch a thief, whose “honor” is stripped away as a punishment. In Tarna, however, this basically means that a person is more or less nonexistent, so the thief can no longer talk to anyone, much less find food. You can offer to help him, which in turn breaks the rules of the land, but this is required to fulfill the duties of a Paladin. Others, however, are somewhat lamer. There’s a Simbani tribesman that you repeatedly need to challenge in a dull minigame. After doing this for days on end, you can eventually become his “friend” and gain another skill. It’s a bit disappointing that after all of the hype that went into building up the Paladin class in Quest for Glory II, that it really just amounts to a few skills and minor story segments – further moral quandaries like the honorless thief would’ve worked much better. Apart from all of the Paladin subquests, this is the first Quest for Glory where your hero can get a love interest, although sadly the relationship doesn’t last for long. 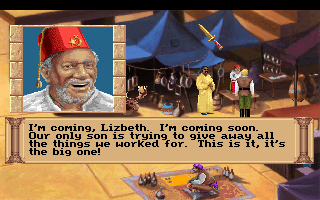 In general the game feels kind of empty. There are a couple of interesting characters – most notably, the Sanford and Son-esque duo in the Tarna bazaar, and the super hippie at the Apothecary – and there are a few amusing scenes, like the fake death message you get if you fail to put out a campfire, or the Awful Waffle Walker, a strange, edible being you’ll find wandering through the jungle, but only if you’re nearing starvation. If you’re lucky, you’ll also happen upon Laurel and Hardy (dressed as French Legion soldiers) and a weird creature called Andy the Aardvark (who dishes out useful hints). But touches like these are uncommon, and neither the plot, nor the characters, nor the writing is as engaging as any of the other titles. So while the setting is unique amongst adventure games, Quest for Glory III just feels lacking in too many areas.

Also, it’s a minor point of contention, but from this game onward, the hero just wears a generic brown and white outfit, instead of donning some of the local garb, a la the Arabian outfit from Quest for Glory II. Oh well.