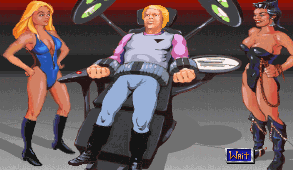 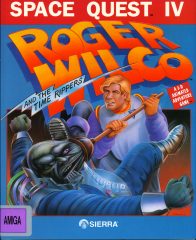 Space Quest III already fudged quite a bit with the fourth wall, what with you having to rescue the Two Guys, and meeting up with Ken Williams at the end. Space Quest IV goes several steps further with its self awareness by sending Roger through his own sequels. The game begins with Roger taking a break at a seedy bar, where he’s accosted by mysterious policemen, who are working for a seemingly resurrected Sludge Vohaul. 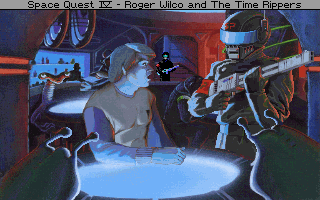 Before he can be executed, Roger is saved by another figure, this time friendly, who creates a rip in the space-time continuum and tells Roger to jump in. With no time to ask questions, our hero stumbles through time, ends up in a post-apocalyptic nightmare, reads the title bar at the top of the screen, and notices that he’s now in Space Quest XII: Vohaul’s Revenge II. After escaping with another time pod, Roger is teleported to yet another sequel: Space Quest X: Latex Babes of Estros (probably a reference to the Infocom text adventure Leather Goddesses of Phobos). Now in a prehistoric wasteland, he’s captured by the titular babes, the leader of which had apparently been jilted by Roger at some undefined point in the future, much to his own surprise. After proving his worthiness, the girls decide to go shopping and abandon Roger at a mall, where he’s chased by the same policemen that accosted him at the beginning. Once again zipping through time, he tossed back to the EGA version of Space Quest I. Roger is a fully colored sprite in a blocky, 16-color world, and some of the bar denizens will actually make fun of him for being pretentious. The game finally ends back in Space Quest XII, as Roger meets up with his son – the one who sent him through the time portal at the beginning – and wipes Sludge Vohaul (once again) from all existence.

Space Quest IV uses the SCI1 engine introduced with King’s Quest V, utilizing 256 color graphics and a fully icon-based interface, including the “Smell” and “Lick” icons from the VGA remake of SQI. They’re still mostly useless, but provide for some even more amusing commentary. The best? Try using your tongue on the ridiculous looking robot in the electronics store. (“I know you’re lonely, but licking a robot’s ear?”)

Far and away the best aspect is the voice acting, featured in the CD-ROM release. Like King’s Quest V, most of the voices are provided by Sierra’s own untrained staff, to underwhelming results, but the narrator is played by Gary Owens, known as the announcer from the TV series Laugh-In, as well as the original voice of Space Ghost. The narrator in Space Quest has always been its strongest points, and it takes on a whole new life when even the most mundane lines are delivered with a sense of sarcastic gravitas. (“Thank you for playing Space Quest IV! As usual, you’ve been a real pantload.”)

If the sequel hopping and awesome narrating weren’t enough, Space Quest IV throws in all kinds of other self-references. There’s a hidden sequence where you can teleport back to Ortega from Space Quest III – using exactly the same 16-color backdrop, like the SQI segment – although since you can’t find any thermal underwear, you’ll melt instantly if you leave your timepod. You also come across a futuristic software shop, filled with parodies of famous computer software titles, including SimSim (simulate your own simulator), Cluck Egger’s Advanced Chicken Simulator (fly rubber chickens), and Boom (the description mentions no interface, no puzzles and no conflict, a pretty accurate description of Loom, the LucasArts game it’s parodying). You’ll also find an Infocom-style hint book for Space Quest IV, (complete with a marker to slowly reveal answers for puzzles.) It’s mostly filled with red herrings and made-up puzzles that have nothing to do with the game, but in a brilliantly Spaceballs-esque moment, there actually is some essential info in there.

There’s also a new Astro Chicken game, this time dubbed Ms. Astro Chicken, which is a typical side scrolling shooter and is thankfully less annoying than its predecessor. (This, along with the original Astro Chicken and the speeder scene from SQI were packaged together in a release called Nick’s Picks, which also included other minigames from Sierra titles.) Near the end of the game, you stumble upon a computer interface that has icons for King’s Quest XVIII and the mystical LSL4 (which, as Sierra fans know, doesn’t technically exist). There’s also an SQIV icon – if you delete it, you’re unceremonious kicked out of the game without warning, leaving you at the cold, hard command prompt if you’re playing in DOS. It would’ve been even more cruelly hilarious if the game actually deleted itself, although that perhaps would’ve been going too far.

Unfortunately, despite its enhancements and even more ridiculous sense of humor, Space Quest IV is plagued with many of the same problems as its predecessor. There are too many action based segments, which are still clumsy and frustrating. The opening segment in Space Quest XII is filled with Invasions of the Body Snatchers-style sub-humans, which will screech and summon death robots, instantly killing you if you’re unlucky. It’s a completely terrible way to begin an otherwise hilarious game. The random Energizer Bunny running around for no discernable reason is pretty amusing, although trying to catch it to steal its batteries is more difficult than it should be. Another action segment, where you escape from the Time Police in the mall, is similarly aggravating, requiring that you perform a very specific set of actions, lest you get fried. The speed of your computer (or cycles in DOSBox) can also cause havoc with these areas. Sections such as these, littered with needless deaths, make it seem like the developers were once again trying to compensate for the extremely short game length. At least some of the death scenes – and their associated commentary – are still pretty funny. Earlier Sierra games always let you walk off cliffs if you’re not careful, and Space Quest IV has some of the best lines to accommodate these accidents. (“Serious damage to important body parts pretty much screws up any future plans you had for living.”)

There aren’t too many skippable items, at least. The only things you need to watch out for are time codes, which control which era you’ll travel to. When you come across the first time pod, the disk version uses these as copy protection, although you can randomly hit buttons in the CD version. However, it’s incredibly important that you write down the time code on the panel before you press anything, since these are important for switching between locations later in the game. Naturally, the game doesn’t tell you this, so if you don’t take notes, you end up stranded. Thankfully the code is the same every time, so it’s not too hard to temporarily save your game, replay the opening segment, and then hop back to your original game.

Space Quest IV presents an interesting dichotomy. It’s frustrating and poorly designed at spots – although much better than the remake of Space Quest I – but at the same time, its premise is astoundingly brilliant, and still remains one of the funniest games ever made, even years after it release. The Two Guys from Andromeda have also noted in interviews that it’s their favorite of the series. 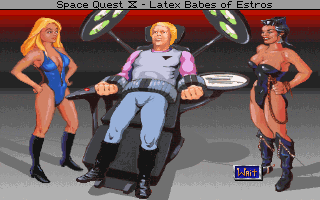 In addition to the voice acting, the CD-ROM version makes a few minor graphical changes. In the mall, the electronics store was originally called Radio Shock, but after being legally hounded by Radio Shack, the revised version changed it to Hz. So Good, a parody of another, lesser known store. The black and white bikers in SQ I now ride black and white bikes (correcting an inconsistency from the disk version), the huge building in the background of Space Quest XII looks a bit different, and there’s an extra Easter egg featuring one of the game’s developers shopping for pants at the mall. There’s also a secret room hidden in the game’s resource files, filled with references to all of the legal issues that Sierra’s adventure games have run into over the years. This includes the ZZ Top members and Droids R Us sign from Space Quest I, the Radio Shock sign, the Hero’s Quest logo (the series was renamed Quest for Glory due to legal issues) and Earl, the father from the TV series Dinosaurs, who made a random cameo in the VGA release of the first Quest for Glory game.