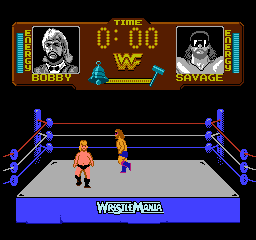 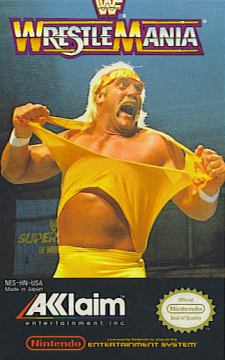 There are almost far too many pro wrestling video games to write about, especially those officially licensed by the World Wrestling Federation… erm, World Wrestling Entertainment as of 2002. But we’ll stick to “WWF” for now when describing the organization from the eighties, which some would consider to be televised pro wrestling’s golden age. “Macho Man” Randy Savage challenged Ricky “The Dragon” Steamboat for his cup of coffee in the big time, the Junkyard Dog sang merrily about grabbin’ them cakes despite being betrayed by the “Million Dollar Man” Ted DiBiase, and Hulk Hogan threw down André the Giant at WrestleMania III at the peak of Hulkamania. Even non-fans of pro wrestling had to respect the WWF’s pull in eighties pop culture, which was large enough to cause many licensed games based off of the circuit.

There were actually some darn good WWE titles pretty early on, like WWF Superstars by Technos Japan in 1989. Also that same year was WWF WrestleMania, which was not good in the least. It would be unfair to compare this NES game to a more powerful arcade game, but it IS fair to compare it to Nintendo’s Pro Wrestling released two years prior. Despite having no actual wrestlers, Pro Wrestling was a fun and reasonably accurate portrayal of exactly what its title described; in comparison, WWF WrestleMania was clearly a brief cash-in meant to sell on image alone.

It featured six of the biggest wrestlers of the time: Hulk Hogan, Randy Savage, André the Giant, Ted DiBiase, and the slightly lesser-known but still very respectable Bam Bam Bigelow and the Honky Tonk Man. You can either engage in a standard exhibition match or enter in a tournament where you take on all opponents with a three-minute time limit on each. The amount of features is Spartan to be sure, but for a somewhat early pro wrestling title, it could perhaps be forgiven if the game itself was fun to play.

But no, here’s the twist: What if there was to be a pro wrestling game where 95% of the attacks are just strikes, with incredibly limited throwing and no submission holds? Wrestling without much wrestling, what a concept! Well, you have to pin the opponent to win if you want to count that as a hold, but that’s all there is. You’ll mostly have to rely on punches and kicks (or head butts and eye gouges for some) in order to drain your opponent of their life, and the only throw you can do is a fairly basic bodyslam by holding forward and pressing both attack buttons. Due to slight variances in movesets, Bam Bam and Honky Tonk somehow cannot bodyslam their opponents, so if you ever wanted to play as a wrestler with absolutely zero throws… wait, you never did, that’s just stupid. Striking attacks are as much a part of pro wrestling as throws and holds, but the throws and holds are what make it wrestling and not just theatrical fighting.

There are at least running attacks and diving turnbuckle moves, but these are more aggravating to pull off than they should be. You can press the A button to run while moving left or right, but you also need to press A again to pull off a dropkick (or a body check in André’s case), and letting go of A immediately cuts the run unless you run for about two seconds. You’ll usually axe your run before being able to dropkick the opponent, and it’s usually more trouble than it’s worth to pull one off. Same thing for turnbuckle attacks, which require you to run into them instead of just standing next to one and climbing it. It would maybe be a bit too much to ask for signature moves on an 8-bit wrestling game with only two attack buttons, but it feels like they could have at least done better with the fundamental attacks. The controls just feel too stiff, and hit detection usually requires you to be point blank with your opponent.

The only interesting element are power-up icons that bounce into the ring and can restore some life if you pick it up, with each icon being personalized to each wrestler (Ted DiBiase gets a dollar sign, Randy Savage gets a pair of shades, and so on). But this little gimmick isn’t enough to save a pro wrestling game with iffy movement, Spartan features, and a lack of worthwhile moves.

In addition to some bland and inadequate gameplay, it doesn’t win much for style points; each fight takes place in a completely black background without any sort of cheering crowds, and the wrestlers themselves, while decent simulacrums of whom they represent, are animated rather goofily with their arms drooped at their sides as they lumber around. The soundtrack by David Wise is okay, but there isn’t much else here to hold longstanding attention.

The mention of David Wise indicates that, yes, this is a Rare game, from their incredibly hit-or-miss NES days where there’d be a Who Framed Roger Rabbit? for every Wizards and Warriors. It was published by Acclaim, also a vastly mixed company who gave us the Turok series but also was responsible for some truly wretched Simpsons-based games among many other licenses. WWF WrestleMania turned out a loser for both companies and is quite a horrible example of pro wrestling for back then and by today’s standards. Acclaim would go on to redeem themselves with more respectable wrestling games like WWF Royal Rumble and WWF Raw, and most know how Rare ended up, but they only made two more WWF games: WWF WrestleMania Challenge and WWF Superstars, both of which were actually competent but not great. Developers would later realize that people actually wanted pro wrestlers to do more than feature their favorite faces and heels, and big names alone weren’t enough to sell a jobber of a game like this one.