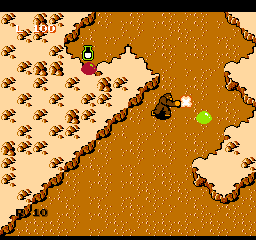 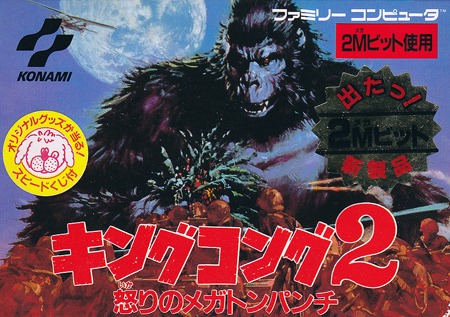 When it comes to video games in the war of the movie monsters King Kong has been grossly under-represented. How could such an iconic character as Kong, a giant ape who holds an entire city to ransom, have so few games? The very concept itself is ripe for adaptation. When we compare the meager list of games based on the franchise to those of his rivals such as Godzilla it is clear that a great injustice has been done to Megaprimatus kong, which may be explained by the dubious nature of the franchise’s legality, highlighted in the furious copyright and intellectual property court battles that have been waged since his conception.

The disputes between Kong’s creator Merian C. Cooper and RKO films weakened any legitimate claims either Cooper or any given studio had to owning the concept as a trademark. The culmination of this was in 1982 when Nintendo won against U.S. Copyright holder Universal Studios’ lawsuit over the character of Donkey Kong, who had become hugely successful when his eponymous game hit the arcades in 1981. It can be argued that Universal’s inability to retain the Kong character allowed Nintendo’s own great ape to overshadow his predecessor in the world of video games and rendered any attempts by any other company to brave this legal minefield unfeasible.

In spite of this there have been a handful of King Kong games that had been made long before those adapted from the Peter Jackson movie. The majority of these have been LCD games or very early computer ports of little distinction. The first two Kong games worth mentioning were both developed by Konami and both contain “King Kong 2” in their titles: King Kong 2: Ikari no Megaton Punch for the Famicom in 1986, and King Kong 2: Yomigaeru Densetsu for the MSX the following year. You may be forgiven if upon reading this you begin to wonder what happened to the preceding King Kong game. King Kong 2 is the title that the much maligned 1986 movie King Kong Lives went under in its Japanese release, despite the many films produced by both the American studios and Japan’s own Toho that preceded it. King Kong Lives is widely regarded as a poor entry in the franchise that, despite an interesting premise, was weakly executed, and was almost universally panned by critics at the time.

The only thing worth mentioning about this film is that it starred Linda Hamilton, best known for her role as Sarah Connor in the Terminator franchise. Yet this is the movie that Konami decided to adapt for the video game market. The fledgling company was making a name for itself on the MSX platform with the likes of Akumajou Dracula / Vampire Killer (better known as Castlevania), Metal Gear, and The Goonies to name a few and Konami gave the same level of quality in producing the King Kong 2 games. The companies best and brightest developed both games including Kenji Shimoide who worked on Life Force, Super C, Yume Penguin Monogatori and Bucky O’Hare. The games enjoy no less than four composers: Shinya Sakamoto, Satoe Terashima, Kinuyo Yamashita, and Kiyohiro Sada who between them have worked on the likes of Life Force, Snatcher, Castlevania, Wai Wai World, Ganbare Goemon, and Gradius, often in collaboration and all of them members of Konami’s Kukeiha Club.

Both games follow elements of the movie’s plot in which adventurer Hank Mitchell (played by Brian Kerwin) travels to Borneo to capture a female giant gorilla, whose blood is necessary to keep Kong alive (having survived being shot down off World Trade Center in the 1976 Dino De Laurentiis remake). A revived Kong then seeks to mate with the female Kong to continue his species. How do these games go about adapting this story? As we shall see although they both share the same source they are, if you’ll forgive the expression, two very different beasts.

King Kong 2: Ikari no Megaton Punch (lit. “King Kong 2: Furious Megaton Punch”) is the first King Kong 2 game by Konami, released on the Family Computer in 1986 in the same year the film was released. The game loosely follows the plot of the film, with Kong as the protagonist searching for the captive female ape named here as Lady Kong. Apart from this one aspect of the story the game itself bears no similarity to the film. Hank Mitchell doesn’t appear anywhere in the game nor do any of the other characters, with Kong having already been revived. The player must guide Kong through nine worlds, each of which has a key guarded by a boss that the player must collect to progress to the next level.

Kong has three forms of attack. Pressing the A button allows Kong to jump which is not only useful for avoiding enemies and obstacles but also damages anything underneath him, which is immensely satisfying to perform and appropriately represents the destructive weight of a giant monster like Kong. The B button controls Kong’s default punch attack as well as throwing boulders (in limited supply and dropped by enemies) which are equipped by pressing the select button. The levels themselves are composed of jungles and mountainous terrain, cities in various stages of the day, and labyrinthine underground laboratories, populated by Jeeps, tanks, balls of slime, mutant grasshoppers, ghosts, dragons, killer whales and even ducks. The choice of enemies is baffling, with the majority of them being completely incongruous to the source material. Although you would expect there to be human enemies in a King Kong game in Furious Megaton Punch they are conspicuous in their absence. One could make the point that they are the operators of the Jeeps and tanks however considering the fact they fight alongside slimes and dragons and given the overall cartoonish feel of the game it would not be implausible to suggest that the vehicle enemies are autonomous. 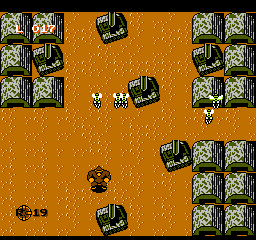 As far as obstacles go, a good part of the environment is destructible which is essential for revealing secrets such as power-ups, consisting of the usual fare of ammo capacity upgrades and temporary invincibility, and warp zones which allow players to skip sections of the game. On the subject of power-ups many of them are a nod to other Konami games, a concept which appears to be something of a trademark of the company. There is a Moai head from Gradiusthat grants an extra life, as well as the cross item from Gradius that destroys all enemies of the stage. It is also possible to pick up the Konami logo as a power-up. Touching it causes Konami Man to appear on screen and refill Kong’s life.

In terms of presentation we will look at the visuals and the music. Firstly the visuals can best be described as being very cartoony. There is a range of bright colours that make full use of the Famicom’s palette, everything in-game is drawn in a super-deformed style, and there is a lot of comic animation from Kong and family in the cutscenes. Considering that the game has very little to do with the actual movie it’s clear that Konami had in mind a much more light-hearted adaptation of the film that appealed to children with its colourful action, whereas the MSX iteration was aimed more at the older PC-using scene who were used to playing an extensive library of RPGs. In the audio department, despite having only a handful of tracks, the music in the game bears all the hallmarks of a soundtrack composed by members of the Kukeiha Club, particularly the catchy overworld theme that plays throughout most of the game which will undoubtedly be stuck in your head after hearing it over and over.

The stages are maze-like in layout which, combined with the top down view, straight away draws comparisons with contemporary games such as The Legend of Zelda. The non-linearity in level design seems daunting at first but with multiple playthroughs it is easy to formulate the most efficient and optimal route and because of this experienced players can finish the game in a relatively short time (using a combination of the level select cheat and a glitch in the room before the boss renders the game beatable in a matter of minutes). 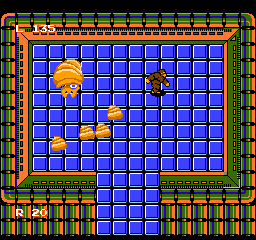 The game is quite reasonably challenging, giving the player only three lives for the whole game, though there is a code to continue from the stage you died in by pressing B, A, and Start on the Title Screen. When you do beat the game, having undergone a brutal gauntlet of Mecha-Kongs, you get an ending where you are reunited with Lady Kong (who is pink) and with Baby Kong (ostensibly the same one from the movie). Holding A + B through the whole credit sequence unlocks a secret message from the staff that congratulates the player varyingly according to how quickly they finished the game, with there being twenty-four different messages in total. After this you can then play the game again on a harder difficulty. 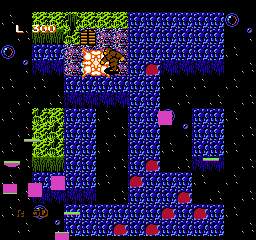 Taking this all into account, is there any reason to play this game? Looking at the game there is nothing about it that really distinguishes it from similar games on the Famicom/NES other than the sheer novelty of playing as King Kong. Yet this is why playing the game is recommended: it is one of the few games where you get to play as the original Giant Ape and if nothing else this makes the game something of a curiosity. As a Famicom game it was obviously never released outside of Japan, however, the game is easily accessible to non-Japanese speakers having little to no text in the actual game, though there is a translation patch for the little text that is there.