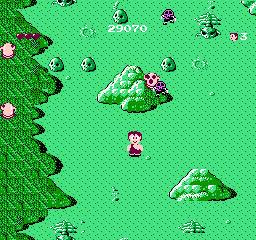 When one thinks of shoot-em-ups, the image of a lone spacecraft versus armies of aliens is often the first thing that comes to mind. Despite Hudson Soft’s previous entries in the genre such as Star Force and Star Soldier falling squarely into this idea, they had different plans for Adventures of Dino Riki (Shin Jinrui: The New Type in Japan). Released in 1987 in Japan and 1989 in North America, Adventures of Dino Riki has players take control of a caveman rather than a spaceship and keeps the action atypically grounded as they fight an onslaught of bugs and reptiles. While Adventures of Dino Riki wasn’t the first game on the NES to try this idea, since games like Commando and King’s Knight predate it by a year in Japan, it still provides a fun, if frustrating take on the genre with its emphasis on platforming and a prehistoric aesthetic.

As expected from a game of this vintage and genre, there isn’t a story to be found. There’s no dialogue or expositional text whatsoever and there isn’t even an ending once you beat the final boss! All that’s available is an amusingly dramatic line in the manual claiming “Dino-Riki is determined to establish mankind’s future in this violent age”. 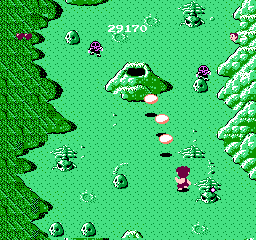 The game takes place over the course of four stages and leads you through swamps, deserts, and canyons each with their own perils to face. Riki starts off with measly rocks as his weapon along with the ability to jump around. Your arsenal can be upgraded by collecting power-ups found throughout the stages, allowing you to throw better weapons, move faster, or even fly over hazards. The most empowering upgrade available is one that turns you into Macho Riki, a large and muscular version of Riki that attacks by shooting projections of himself. One weapon power-up gives you stone axes, two will give you boomerangs, and nabbing three gets you the torch, which acts as a potent rapid-fire spread shot.

It’s important to both acquire power-ups quickly and utilize your jump as a form of dodging, as the penalty for failure is harsh. Getting hit once drops you down one weapon and speed level while dying makes you lose everything you’ve collected. Thankfully, Riki can take two hits by default and can find extra health scattered throughout the stages. This system greatly rewards skilled play in that the longer you manage to avoid damage, the easier the game will be. Collecting more weapon power-ups while already having the torch causes them to act as an instant use screen clearer, cleverly rewarding the player for avoiding damage. 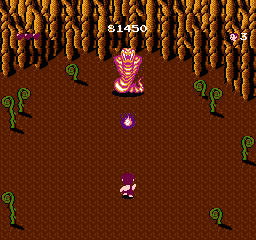 The impressive variety of enemies Riki has to deal with throughout the game certainly doesn’t make staying alive an easy task. Even the most common enemy, flying bees, move across the screen extremely quickly while simultaneously firing projectiles. Combine these with other threats such as skulls that fly in from the bottom of the screen and clouds of bats that fly in sine wave formations and it’s easy to see how death can come quickly. The most frustrating enemy of all is a group of black orbs that surround and close in on Riki; they take so many shots to the point that it’s nearly impossible to avoid damage unless you have the torch ready.

The first three stages provide the player with notably different challenges. The first stage is a swamp where players have to hop between lily pads that move back and forth while also rising and sinking into the water. The second stage is a desert filled with deadly quicksand traps and dinosaurs that breathe streams of fire across the screen. The third stage introduces invincible enemies, such as dinosaur skeletons that suddenly rise up and charge to attack. The fourth stage is unfortunately where the game falters creatively, as it’s just a remix of the previous three stage themes. Stage 4-1 is a twist on stage one, stages 4-2 and 4-4 both use stage two as a template and stage 4-3 is a much more challenging take on stage three.

Stages are divided into four parts which serve as checkpoints once reached and culminate in a boss fight. There’s no way to tell if you’ve made it to the next part of the stage until you die, but the stages are divided in such a way that it never takes too long to hit the next checkpoint. Stage four is the big exception to this rule, with each part of it having no checkpoints whatsoever. 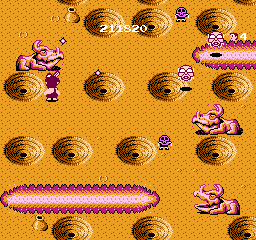 There are four boss fights throughout the game and they’re much easier than the ordeals that precede them. The final boss is the only one that attempts any unexpected tricks and the game even generously heals you at the start of a boss fight. The first boss is a pteranodon that flies back and forth while shooting. The second boss is a tyrannosaurus that behaves similarly, but moves in a zigzag pattern instead. The third boss is a giant cobra that teleports around before firing at you. The final boss, the Monster Fly, duplicates himself and summons an endless swarm of smaller flies that move across the screen to trip you up.

The game’s biggest weakness ironically lies in its most standout element – the platforming sequences. Since the game is played from an overhead perspective with an automatically scrolling screen, the platforming can feel very frustrating and inaccurate. If the player tries to jump ahead too quickly before a platform fully materializes onscreen, they’ll end up hitting the top of the screen and falling to their death. Waiting too long on a platform will push Riki off of it and kill him as well. Riki accelerates quickly when jumping, making it all too easy to overshoot a platform. To make matters even worse, collecting too many speed boosts can make certain sections unreasonably difficult to complete. While skilled players can hold onto a flight power-up to bypass some of these platforming sections, it won’t take long for most people to become utterly demoralized.

While Adventures of Dino Riki isn’t a graphical showpiece for the NES by any means, its look is rather charming and holds up well. The game is colorful and manages to make each of the first three stages fit the environments they represent. The enemies are all distinct, with their appearances ensuring that you won’t miss any of them when they’re on the screen. Boss sprites are large and imposing but don’t have much in the way of animation, so they end up lacking the gravitas a boss should have. Projectiles are large and noticeable enough that you’ll never be hit by surprise. The action does occasionally slow down when there are lots of enemies onscreen and there’s also some screen flickering when fighting bosses. Riki himself is surprisingly cute, with a constant smile on his face until he gets hit or dies, where his expression changes to a goofy display of shock. 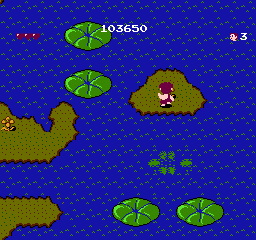 Dino Riki’s soundtrack was composed by Takeaki Kunimoto, a stalwart composer of Hudson Soft in the 1980s who was responsible for games like Star Soldier and Momotaro Densetsu. The standout track by far is the one that plays during the first stage. It’s an infectious upbeat song that really nails the feeling of setting out on an adventure. The boss theme is also appropriately manic and helps set the tone for what a boss fight should be. The songs used for the later stages are more low-key, which does fit the more intimidating nature of those stages. The only real missteps in the soundtrack are the fact that each part of stage four uses the same song and the final boss shares a track with the other three.

Adventures of Dino Riki was backed by a marketing campaign in Japan revolving around Korean-Japanese wrestler Riki Choshu. His name and likeness were used as the basis for the character of Dino Riki as well as the Macho Riki power-up, and he prominently appears in the commercial for the game. In Japan, the game was published and marketed by a company called Ricoh Elemex (their attempt at a software branch being known as Rix Soft) that specializes in precision instruments. This appears to have been their one and only foray into video games and their name was removed from the North American release of the game.

This strategy of using a celebrity for marketing purposes is similar to what Hudson Soft did with Takahashi Meijin and the Adventure Island series. As a matter of fact, Dino Riki shares a surprising number of similarities to Hudson’s then-popular franchise. Both games star a protagonist based on a celebrity, use a prehistoric setting with somewhat cutesy characters, include axes and boomerangs as weapons, require poking around empty spaces to find hidden items, and even have a hidden method of allowing for infinite continues. There’s also an enemy in Dino Riki that looks curiously similar to the eggs seen frequently in the Adventure Island series.