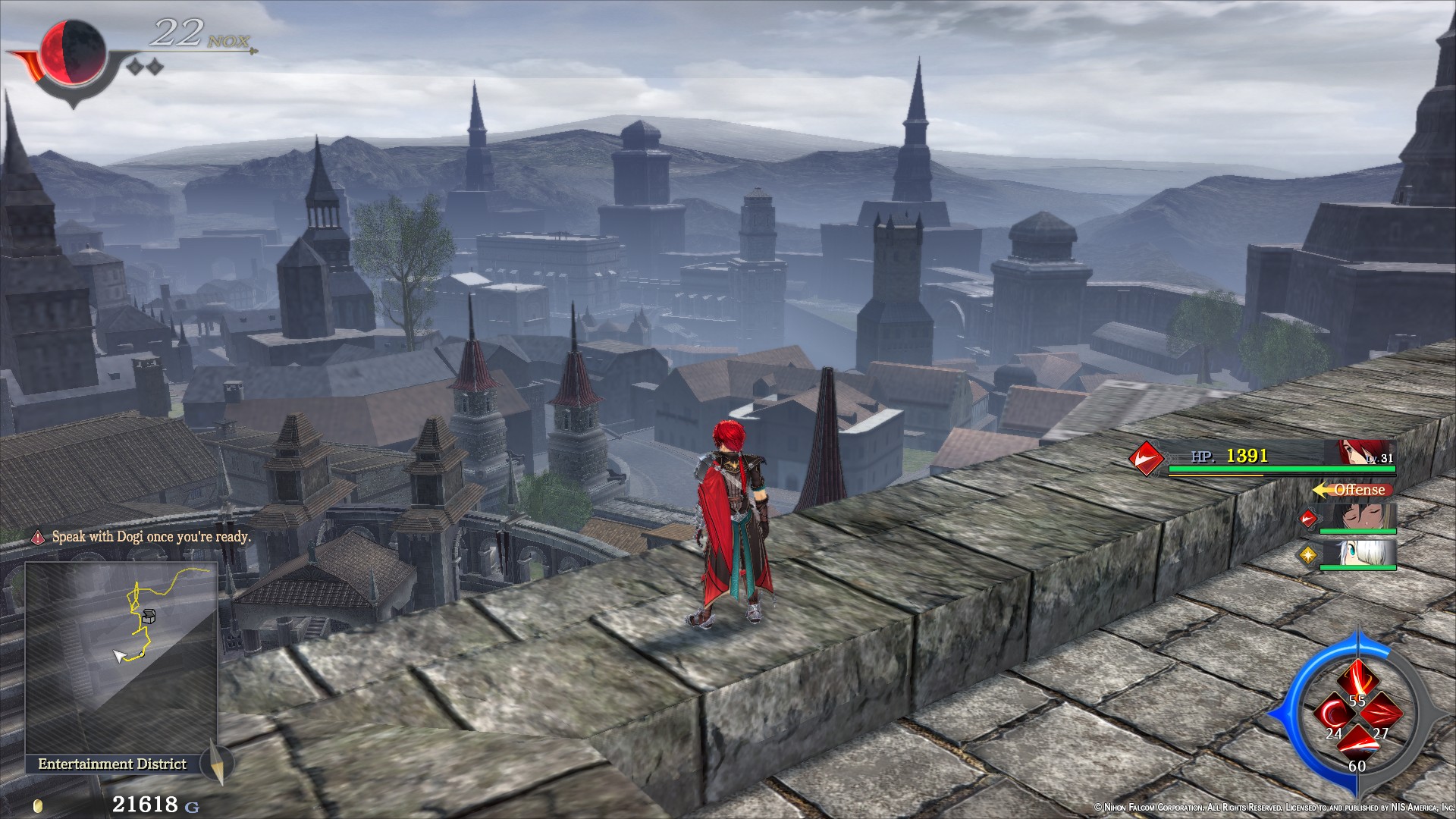 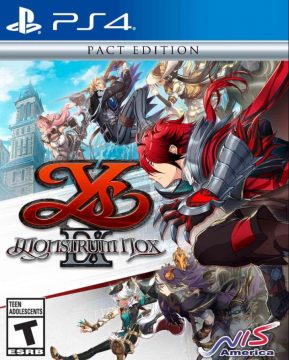 Ys IX: Monstrum Nox takes place shortly after Ys Seven, with Adol and Dogi visiting the province of Gilia, which has been occupied by the Romuns. Upon encountering their capital city, Balduq, Adol is arrested and tossed into the gigantic prison at its center. He gets out of his cell fairly quickly, but during his escape, he encounters a mysterious woman named Aprilis , who shoots him with a mysterious gun. This gives him the power of a Monstrum, which is sort of like a supernatural superhero. He meets up with other Monstrums, who are charged with hunting down otherworldly portals that pop around the city, each filled with monsters. When in human form, Adol dyes his signature hair blue and takes cover in an old inn called Dandelion, which he eventually helps turn into a thriving business over the course of the game by drafting other folks around town. While Adol’s new powers are cool, the curse also means that he can’t leave the city, so begins investigations with his team to determine how to break it, as well as investigate some mysterious disappearances and experiments involving the central prison. 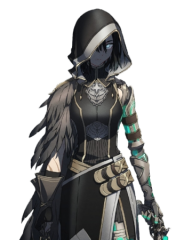 A mysterious woman with artificial limbs who shoots Adol at the outset of the game and inflicts him with the Monstrum curse. Despite being fairly important to the story, she’s not a playable character. 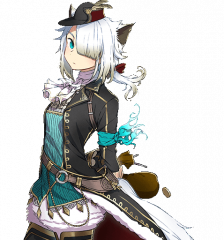 A thief who steals from the rich and gives to the poor. She has the ability to scale walls and buildings by running straight up them, and attacks with a claw. 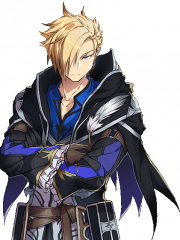 A rather grumpy sword wielding knight who has the ability to glide with blue wings. 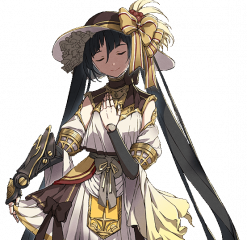 Literally a doll that has mysteriously been given life, she wields sickles and retractable sweep swords, has the ability to see through objects called the Third Eye, handy for finding hidden things. 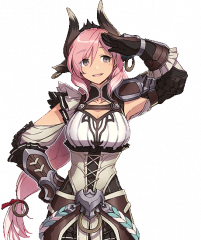 A rare female character that’s a heavy bruiser, wielding an enormous hammer, which she can use to destroy certain walls. 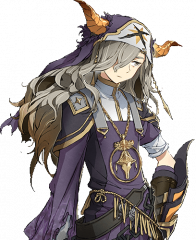 A historian who’s something of a shut-in, who attacks with magic projectiles. He can also turn his body into a shadow and use it to hide in the ground. 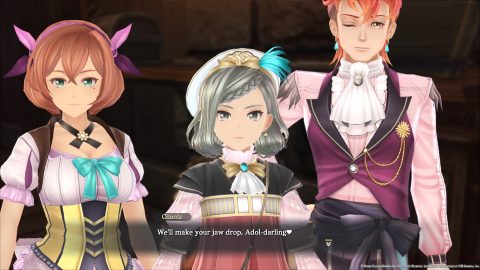 The game runs on the same engine as Ys VIII: Lacrimosa of Dana, and plays much the same way. You can have three characters active at once, and can switch between them at will. New on are the Monstrum Gifts, given to each of the central characters, granting them a variety of movement abilities. It’s here where the influence of Breath of the Wild on other action-RPGs like Ys can be felt, as you’re given free roam to run up along any wall, scour the city rooftops, and glide around town. While the implementation is a little ropey thanks to the many outcroppings that cause your character to plummet to the ground, it’s still quite a bit of fun to scale the enormous buildings and gaze over the city. Like most superheroes, the civilians have mixed feelings towards the Monstrums, since it’s not entirely clear if they’re good or evil, but there are plenty of subquests that will help ingratiate them towards you. Other collectible quests encourage exploring its many nooks and crannies – finding treasure chests, hunting for graffiti, and scouring for glowing blue petals. The entirety of Ys IX takes place within Balduq (and a few of its surrounding areas) but this exploration makes it quite a bit more compelling than the average RPG overworld.

However, centering on Balduq also highlights one of the game’s central issues – it’s really ugly. The city is filled with some towering buildings, but so much of it is characterless, generic brick buildings. Falcom isn’t exactly a high budget developer and it’s understandable that they couldn’t create something on the scale of an Ubisoft or Rockstar game. But there are plenty of Japanese video games that manage to overcome this with attractive art design – Ys VIII was designed for the Vita and still had a lush, pleasant tropical vibe going for it – but this is just grey, grey, grey. The performance is also pretty shaky on the PlayStation 4, running at 60 FPS when there’s not much action but drastically reducing its framerate when exploring the city or during combat.

The game’s eight chapters mostly follow the same structure, focusing on one of the members of the Monstrum team and their human life in the city. When they join, they allow you to use their powers, making exploring the city even easier. Here, you need to obtain 100 Nox points by either clearing out monster portals, or by accomplishing subquests. The subquests are far preferable because they allow you to advance much faster, and they provide quite a bit of interesting storytelling and worldbuilding, which is much more gratifying than grinding battles. Once you’ve met your quota, there’s a large portal that opens that leads to a longer encounter called the Monstrum Nox. These massive fights are very reminiscent of the tower defense segments from Ys VIII, as you fend off enemies before they attack your base. The members that have joined your team at Dandelion provide various buffs, which can be improved by giving them gifts. Once you’ve cleared this, then the chapter continues, usually leading into a dungeon with a few boss encounters. 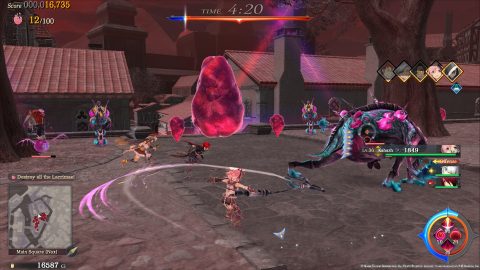 The narrative moves pretty slowly, focusing on building up your party while slowly revealing parts of the story, which eventually become more focused in the final chapters. The most intriguing aspect of the story is the mystery of the two Adols – one, taking the Monstrum form and exploring the city, and the other, still without those powers and confined to the walls of the Balduq prison. Here, he’s allowed some level of freedom to wander around, even making a few other friends. There are also shorter dungeons here, which are more focused on traps than combat. Since this Adol doesn’t have any companions in these sections, and is missing all of his levels, equipment, and items from his apparent doppelganger, these areas are probably the few times where you’ll see any Game Over screens, since it’s very possible to be instakilled here. Luckily, there are plenty of checkpoints so these aren’t too frustrating, and they aren’t very long either. These prison segments reflect just a fraction of the overall Ys IX experience, but they are a welcome gear shift, and help expand the story.

In addition to the Monstrum Nox sections, there’s quite a bit that has been imported from Ys VII, even if it doesn’t entirely fit into the framework of this game. Recruiting people for Dandelion is similar to hunting for shipwrecked survivors, right down to the services they provide. (However, since Ys IX only has one ending, running their subquests isn’t really needed.) The game is also weirdly restrictive, as there are barriers that corral you into certain parts of the city, until you’ve cleared the Monstrum Nox and taken them down. It’s like Falcom didn’t trust players enough to give them free roam of the city. Back in Ys VIII, you may have needed to rescue a certain number of folks before you could make progress, but at least it made logical sense, since they helped to move obstacles. Plus, you’d think that gaining new Monstrum skills should be enough to enable you to explore new areas of the city, because that’s what most Metroidvania games do. Not here – the boundaries are just weirdly arbitrary, strictly delineating the landscape into chapters in a way that feels weirdly outdated.

This music – and this really hurts – is also tragically mediocre for an Ys game. There isn’t any high powered intro theme, and there really isn’t any memorable “First Step Towards War” or “Sunshine Coastline” theme that sets the tone for the early stages of the game. Most of the time you’re wandering around Balduq, it’s just kind of genial and pleasant, but noticeably lacking in excitement. The music changes to battle themes whenever you run into a portal to trigger a monster attack, but these are over so briefly that they hardly make an impact. The action themes – used in dungeons, boss fights, and the field sections – have also moved further away from synthesizers, focusing mostly on guitars. These tracks are still pretty good, but they’re all so similar, and they tend to blend together. 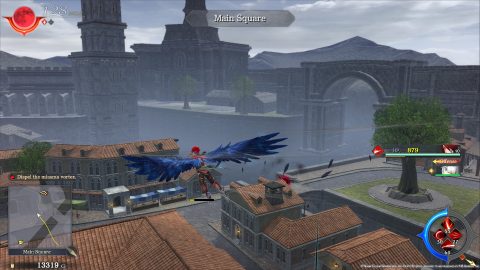 The story, despite its sluggish pace, is pretty decent at least. Focusing each chapter on one of the party members, and the highlighting the disparity between their normal life and their Monstrum form, really works in creating what’s probably the most interesting assortment of side-characters seen in an Ys game. A few of the characters actually prefer the advantages their Monstrum forms and would rather that they keep their curse, which creates some tension within the team. Also, in focusing on the history and political tensions between Romun and Gilia, it helps further expand the worldbuilding of Ys, which has been one of Falcom’s storytelling strengths with their Legend of Heroes series. There are a few callbacks to much older Ys games too, but as ever, these are minor, and the story of Ys IX still stands on its own. The localization is also a big improvement over Nippon Ichi’s clumsy attempt in the prior game.

One sticking point, though, involves White Cat, who acts much like Robin Hood, stealing from the rich and giving to the poor. Except, the poor just end up spending all of that money on gambling and booze, while demanding more free handouts. Politics in JRPGs tend to be abstracted by their fantasy world, and even then, tend to focus on broadly agreeable themes – environmentalism is good, racism is bad, and the people who wield power are likely to abuse it. What’s even more frustrating is that White Cat is part of the company that’s exploiting the poor and could do something to challenge it from within, but instead they open up a flower shop in the ghetto, an absolutely baffling resolution to her arc. These sorts of RPGs are also usually sympathetic to the downtrodden, so it’s almost shocking the way that this particular subplot sneers at the city’s underclass. 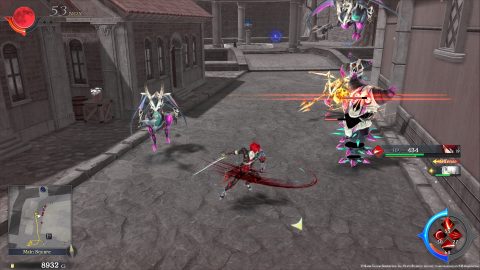 Ys IX marks a strange evolution for the series, in that it’s clearly trying something new, especially with the hyperfocus on exploring a singular large city, and outside of some narrative stumbles, it mostly works. But it’s also shackled to the framework of its predecessor, seemingly more due to development issues than anything that made sense for the story. The weaker visuals and music, as well as technical issues, also mark a noticeable step down. It’s still Ys at its core, with its satisfying hack-and-slashery still present, just not quite up to par with other efforts.