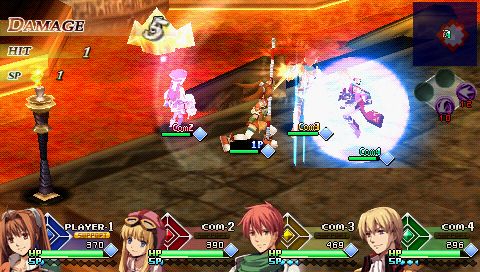 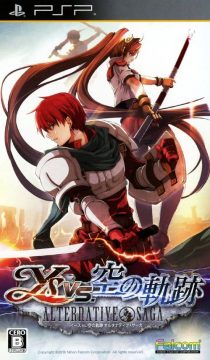 This is an odd one – Ys vs. Sora no Kiseki is like the Super Smash Bros. of Falcom. It’s a multiplayer fighting game bringing in main characters from its two most popular series, along with cameos from numerous others. Practically everyone from the Ys side is from Ys Seven – Adol, Dogi, Aisha, Geis, Elk, Mishera and Cruxie. The only one from an earlier game is Chester, the villain from Ys III / The Oath in Felghana. On the Sora no Kiseki side, there’s Joshua, Estelle, Tita, Klose, Agate, Olivier, Lowe and Renne. There are numerous sub-characters, though, and from Ys the game includes Jue, Sera and Xisa (the three fairies from Ys VI and Seven), Feena and Reah, Sigaroon, Mustafa, Ernst, Lilia, Olha, Tia and Maya, Yunica and Hugo, and Dark Fact. Lloyd, the hero of Zero no Kiseki, also makes an appearance, as well as characters from several other franchises, including Pippiro and Pokkle from Zwei!, Dela from Brandish, and the cast from Gurumin.

The fighting utilizes the Ys Seven engine, and is very similar to the action in that game, and it feels more like Capcom’s Power Stone than Super Smash Bros. It also adds a jump button, which makes the action and controls slightly more confusing. It allows four players at once with ad-hoc multiplayer. The storyline is a gigantic conglomeration of Falcom stuff, as the story begins in the realm of Xanadu, and the soundtracks consists of both original and arranged versions of various Falcom tracks. There’s no real exploration, as you just pick events and battles from a map screen.

From a fan service perspective, there’s a lot to love about Ys. vs Sora no Kiseki, but that’s also the reason why we’ll never see it in English, because so much of it references Japanese-only games. Plus, since it’s primarily an action game with some level building elements, anyone looking for an actual adventure or a story that just isn’t a mish mash of crossover fan fiction, will also likely be disappointed.