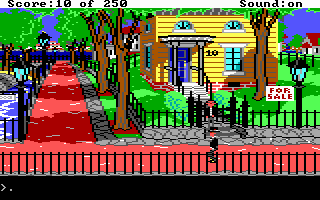 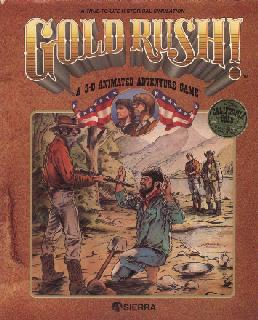 Gold Rush! is one of the handful of early Sierra adventures no one remembers. It never became a series, and the title makes it sound like an Oregon Trail rip-off rather than an adventure game.

This AGI-developed title takes place in Brooklyn in 1848, mere minutes before the California Gold Rush began. As newspaper reporter Jerrod Wilson, you’ve got an early scoop – your brother has gone west and struck it rich out in California, and wants you to join him. You have only about fourteen minutes in real time to sell your house, plan your trek and buy your equipment before the Gold Rush starts, dropping property values and causing the price of goods to skyrocket. Obviously, taking too long to do any of this will make your journey more financially taxing. 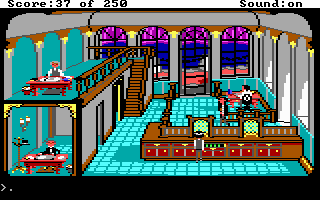 Gold Rush!‘s most impressive, and most vaunted, feature is the ability to choose between three routes to travel to California. You can go the most direct route and simply make the 3,000 mile or so trip across America by hooking up with a wagon train. You can take a ship down to Panama and hike over the jungle, seeing as the Panama Canal had yet to be developed. Or you can take the super long route via boat all the way around Cape Horn at the bottom of South America. While this might seem awfully ambitious for such an old title, in reality, it doesn’t add up to much. Most of the segments just show your progress on the map, along with several dozen messages relating your hardships on your voyage. There are only a handful of screens on each path where you can actually do anything. The Panama route consists of a few infuriating Space Quest-style arcade sequences, avoiding wild ants, wading through poisonous plants, and navigating through quicksand. The Cape Horn route involves hunting around the ship to assemble a fishing rod for when the boat inevitably crashes. And the land route involves, literally, sitting and watching the grass grow, as your observations are supposed to clue you in on the weather.

These are also the most maddening segments. Like a lot of early Sierra games, you need to grab specific items from the shops in Brooklyn before you leave in order to survive your journey. But naturally, once you leave, there’s no turning back. You can also die completely randomly, from, say, cholera, which is utterly infuriating. Such deaths are completely unavoidable, and the only solution is to reload an earlier save game. 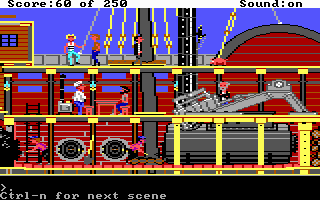 Once you reach Sacramento, the three paths converge, and the quest is identical from there on out, regardless of which route you took. You hop on a carriage to Sutter’s Fort and begin to make your new life. This consists of buying a pan and sitting in the river sifting for gold several hundred times (note: not an exaggeration) until you have enough cash to buy some more equipment and eventually piece together the clues to track down your brother. There are a couple of vaguely interesting segments here, like sneaking into (and out of) a hotel room with some valuable information, and a quick spelunking trek through a mine to find your brother. But otherwise, the whole “gold digging” aspect is remarkably unexciting.

Which brings us to the main question – what’s the point? The narrative is only vaguely compelling, although the period-specific slang of the narrator lends some much needed color. The journey westward hardly feels substantial, considering you spend so much time simply reading text and dying at the mercy of the computer. The rest of the time is spent doing boring activities (Quitting your job! Getting the mail! Buying a mule!) and it’s not until the very late segments of the game that you feel any sense of adventure. Perhaps the game functions as edutainment, as it does a decent job of putting the Gold Rush, and the mindset of its participants, in a historical context. Plus, getting the noose for failing the copy protection quiz is a little bit funny. But the only real thing one gets out of Gold Rush! is the feeling that anyone who participated in it was a right old crazy bastard. 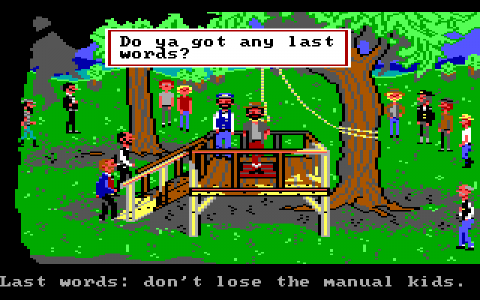 Approximately ten years after its initial release, an outfit called The Software Farm, run by the original designers, bought the rights to the game from Sierra and republished it as a collector’s edition under the name California Gold Rush. Other than some “collectible” goodies like a wooden box and a map showing the travel routes, the actual game remains unchanged. In 2014, the game was released digitally on Steam, as a prelude for a later remake.