Virtua Fighter Kids is a product that could only have been made at the height of the Virtua Fighter craze – it’s basically just Virtua Fighter 2 in super deformed. Some of the first merchandise items Sega produced for its then flagship franchise were plush dolls of the characters, which could be won at the claw cranes that fill the entrance area of every Japanese arcade. The stars of Virtua Fighter Kids are actually just those dolls, only with much larger heads. The game opens with a hilarious FMV intro that shows the sentient dolls kicking their large “real” versions’ asses. It’s also the first and only game in the series that shows a video ending for each character after playing through arcade mode.

The premise allows AM2 to do all kinds of crazy cartoony stuff that makes the game a real slapstick experience: When characters run, they leave a dust cloud, and when they get hit, stars fly around them. They also all got chipmunk voices in their win pose speech samples. When crouching beneath high attacks, a goofy animation plays where they swing around their enormous heads like boxers. All the while the huge heads make facial expressions so much more visible and distinctive. The little creatures are actually supposed to be dolls in the game’s narrative: Aside from the FMV, there is a hidden factory stage that shows their assembly line when Shun fights against himself, as well as a toy shop in a Pai vs. Pai match. There is also a variant of Dural whose head is a transparent fish bowl – an its inhabited! 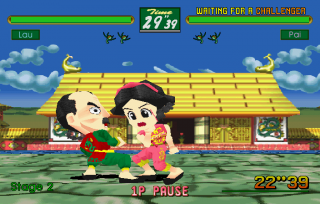 The game isn’t just called Kids and styled kiddy-friendly, it’s actually servable as an entrance level variant for kids… and other amateurs. It introduces the new difficulty setting “Practice,” which sets the CPU at about the intelligence level of baked beans, and it’s even possible to make the own character invincible. The game also allows to program combo macros for easy access during play. Unfortunately, the large heads really weren’t such a great idea for a fighting game. They give the game a really weird feel, and keep clipping into each other all the time. 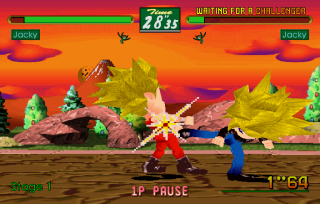 Virtua Fighter Kids was released for Saturn and in arcades. The latter runs on the low-end STV hardware, though, so both versions look identical. When playing the Saturn disc through emulation, though, one has to take into account that the game uses an interlaced video mode. SSF has an option to circumvent it, but it costs tons of extra processing power.