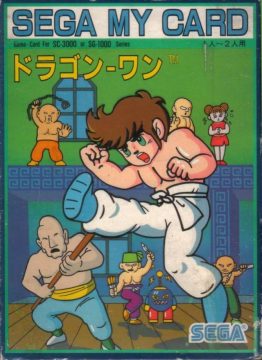 The SG-1000 was Sega’s first attempt at a home console, but it was an ill-fated project. Already technologically outdated upon release – it hit shelves in Japan on the very same day that the Famicom did – it mostly served as a platform for hopeless ports of Sega’s arcade hits. There were some MSX games, but the home computers profited more from the similar system specs of the two. It only had a handful exclusive titles, and most of those were obscure Japanese pachinko, mahjong or board games. All the system was really notable for were a couple of original shoot-em-ups, Yuji Naka’s debut Girl’s Garden, and Dragon Wang.

The title might seem mildly indecent to English speakers (on the status display it’s shorted to D-Wang, which has only gotten more awkward in time), but Wang is actually the family name of the Chinese protagonist, a shirtless kung fu fighter on a quest to Get the Girl. The action in the game is an homage to Bruce Lee’s Game of Death, or maybe a rip off of Irem’s Kung Fu, which is also an homage to Game of Death, despite its Jackie Chan license. 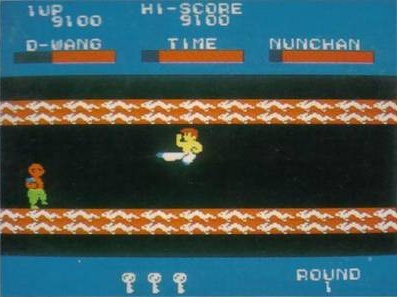 Like in those two titles, the hero enters a dark tower full of martial arts fighters, but the structure has been mixed up a bit. Instead of fighting a major opponent on each floor, Dragon Wang has to jump up and down between them to get through a maze and find the big bads in each round, mowing down countless mooks on the way. Like in Kung Fu, these consist of unarmed guys and knife throwing cowards. They’re not quite the life-sucking killers as in Irem’s game, but can get dangerous nonetheless, even though they all go down after a single hit. Timing is very important when fighting them off with Wang’s mighty foot – cause fists are for sissies, he just kicks the shit out of everyone.

The levels are mostly just samey-looking corridors in front of black nothingness. Whenever Dragon jumps through a hole in the floor or ceiling, all his enemies explode. There are also some annoying hidden trapdoors to set him back. The most exciting parts are the occasional shutter doors that have to be kicked open, all the while the enemy hordes keep on attacking. 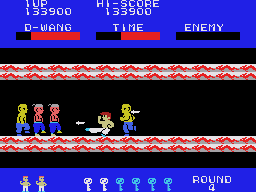 All this of course is only staged to wear down his energy for the bosses, who guard the keys to the level exit and can be approached in any order. In the first stage there are three of them, but one more gets added with each following round. The first few are just martial arts movie stereotypes like “guy with nunchucks” or “guy with a stick.” Eventually, though, Wang gets to fight the “Warpman” who suddenly appears anywhere on the screen for a surprise attack, and a laser-shooting robot! The final boss, called Jonathan, is just a cheating asshole and pretty much impossible to beat, even though he appears to be just a pair of pants.

It doesn’t really matter if you never get past him, though. Dragon Wang is out to get his love Kyoko from the dark tower – who might’ve been kidnapped by the villains, or just happen to live there, it’s never really told. At any rate, “Only with true love can you become her hero! Try next round!” But it’s all a lie. D-Wang will never become her hero, and he’s stuck inside the tower forever. Once he clears the fourth round, the same stage just repeats over and over again.