While evoked as part of a series of Saturn-to-Game Gear ports in Japan (see Panzer Dragoon Mini), the Western title makes it perfectly obvious that the only handheld Virtua Fighter is based on the animated series that aired around the same time. As such it’s also the only title in the series that has a dedicated story mode, which goes through an extremely condensed version of the anime’s plot. It’s only a handful stages long, and disappointingly none of the TV series’ original characters appear as fighters in the game. Available are only the characters from the first Virtua Fighter game minus Jeffry.

Due to the limitation of buttons, block had to be put on the start button, which is a bit unwieldy. The controls in general aren’t all that responsive, but it doesn’t matter cause the CPU is really dumb most of the time. Its best shot at a win is through a ring out, which has very broken physics in this game. The English version also had 2-player link mode taken out, so Virtua Fighter Animation is easily the most useless series entry ever created, portability be damned. Not only is the Japanese version superior, it was also sold in a bundle with a neat special edition Game Gear system. 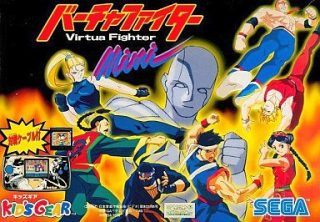 At the start of each fight in story mode, one has the choice for some really strange zoom options – they grossly enlarged the sprites, but leave the backgrounds as is, which makes the game just look silly. Another option switches between perspectives if the combatants get close to each other, which of course is even more terrible.

Tec Toy produced a Master System version for the Brazilian market, but that is even more miserable. It simply omits the blocking button, completely depriving the game of what little tactical finesse was left. The full view of the stages looks neat, but leaves the game with huge borders at the top and bottom.