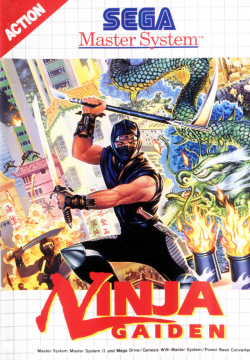 Sega’s next endeavor in the Ninja Gaiden series was released for the Master System in 1992, but only in PAL territories, because they were the only ones that didn’t notice that the Master System was dead in the rest of the world (In fact, it should stay alive at least in Brazil for a long time). This time, Sega actually produced a decent game out of the franchise, though it seems likely that it was actually outsourced to SIMS. Not only does it share code segments and credited pseudonyms with other SIMS games, but it also uses the exact same font for story sequences as the Master System version of Psychic World by SIMS (however, it’s hard to tell to what degree there was an exchange of resources between Sega and their third parties). Too bad hardly anyone would have noticed the game at the time of its release, anyway. 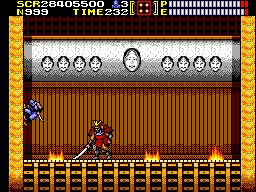 After all his adventures in America – that’s as far as the plot connection to the other games goes – Ryu now finally could return to his home town in Japan, only to find it completely destroyed and it’s most valuable treasure, the Shinobido scroll stolen by the evil (and demonic, of course) Dark Shogun. With their second try Sega actually paid attention to the story development and cinematic cut scenes, though they are rather slow paced, lack interesting plot twists and aren’t as exciting as the NES games’ cut scenes by far. 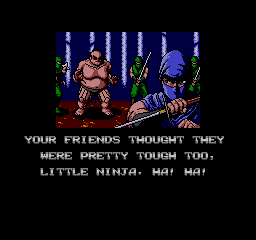 Unlike the Game Gear title, the game also has an appropriate length with eight stages, with many sections partly inspired by previous Ninja Gaiden games or common platforming clichés, like an ice stage, a volcano stage and a waterfall stage. The bombs lying around in some levels certainly remind one of Sega’s Shinobi series. Compared to its predecessors, climbing is an even more important factor in these stages, despite the fact that Ryu’s abilities have become more limited. Instead of clinging onto walls, you now immediately have to time your wall jump and continue, or you will fall down. You still can cling onto the branches of trees and poles, but there’s no hand-over-hand climbing. These changes make the climbing much more challenging, but scaling difficult heights becomes a lot of fun. As the game was only released in PAL regions, the game runs slightly faster on NTSC machines, though it’s still quite playable, as the quick pacing is in line with the NES games.

Ryu’s arsenal has been changed once again. The Windmill Shuriken makes its comeback, but now it’s just a strong shuriken that doesn’t return to you. Other weapons include a projectile that is cast into the four main directions and homing fireballs. The latter one are the greatest flaw of the game, because they totally destroy the balance. The developers took a lot of pain to come up with creative and challenging boss fights, but all their efforts are in vain if you just can stand in a corner and comfortably spawn your fireballs to beat them. The game suffers from heavy Castlevania syndrome, so you are not likely to ever run out of ammo. You even can get an unlimited amount if you ever reach 999 charges. It’s a shame to see a game with such a good potential be spoiled by unnecessary, stupid design flaws, but if you restrain yourself to not using any special weapons against the bosses, you can have a fun and challenging game. Ryu can now also perform a completely useless “desperation attack”, which kills every enemy on screen except bosses, but depletes a fourth of his health, which is more than any group of enemies could ever do to him, as long as you’re not acting extremely clumsy. 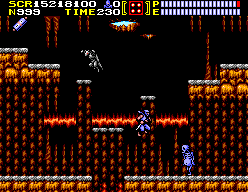 Though the game finally manages to at least reach near the quality of its more popular siblings, the same thing certainly can’t be said about the music. Most of it is based on very repetitive loops that are played throughout the very long stages without any variation, and it gets on one’s nerves very fast. It’s lacking drum samples like those in the NES games, so overall it carries a lot less of the musical punch that made those so catchy.