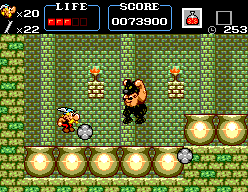 1991 would turn out to be a great year for Astérix, as he wasn’t honored with just one great video game, but two. Exclusively released in Europe and South America, this little title puts the French charmer on a home video game console for the first time. The system of choice was Sega Master System, a console that had a strong presence in Europe and Brazil. While the arcade game was done by Konami, this game was done by Sega of Japan.

Astérix is a side scrolling platformer, the kind the NES and Master System were known for. This time around Panoramix has been kidnapped, so Astérix and Obélix rush to the rescue in an adventure that will take them to caves, under the sea and finally the circus in Rome. The team behind this game was headed by Tomozou Endo, who earlier had worked on Michael Jackson’s Moonwalker and Castle of Illusion Starring Mickey Mouse. The end result here is one of the finest platformers to be found on Master System. At the start of each round, you get the choice between either Astérix or Obélix, who both have pros and cons, and your choice affects more than just your abilities.

This game is told in a unique manner for its time. The duo actually splits up and take different routes, and the result is that depending on what character you choose, the level layout is altered or all together different from the other character. This makes the game essentially twice as long after first glance, and the levels remain individual until the last few level stretches in Rome, which are identical across the two heroes. All the levels are relatively short, but packed with tons of secret passages and items for you to find, as you have to search every wall for hidden treasures. Along the levels are also blocks which can be broken to find items and treasures. Astérix needs the magic potion or specialty items in order to break them while Obélix can punch through them without any assistance.

There are a lot of things that borrow from other popular games in the genre, especially Super Mario Bros. and Castlevania, which is an interesting mix. The first similarity you will notice is the wells. Certain wells along the road will allow you to sink down and access secret underground sections, where you can collect coins and other valuables. This is obviously a very famous element from Mario games. The similarities to Castlevania show in the way items are used. Both Astérix and Obélix can pick up items that help them get rid of baddies quicker, and these are mostly potion based. These potions are small bottles thrown in front of you which expands and creates a small field of deadly spread, very similar to the holy water found in Castlevania. The map screen and level layout also bears some resemblance to Castlevania, as do the enemy patterns. 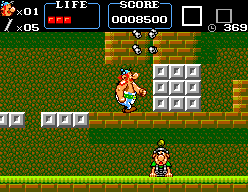 The levels and layout are all trademark platformer material. There are forests, ice caves, fire caves, and pyramid mazes. At one point you even swim through the Roman sewers, which must be the most disgusting idea for an underwater level of all time. The travel aspect to the level layout is very much in line with the usual Astérix way of adventure and never feels out of place nor does the level succession feel forced. On most levels the main objective is to find a key that unlocks the door to the boss battles (similar to Power Blade on NES). Bosses sometimes change depending on what character you have chosen, but most of them are pretty simplistic and simply jump around in a specific pattern and are disposed of quite easily. One interesting boss is a trio of midgets that jumps out of holes, leading you to play a game of whack-a-mole in order to defeat them. This game doesn’t make much use of characters from the actual books and relies more on generic Romans, various animals and vikings to be the obstacles of your journey. They did manage to get some well known things included such as the tree-stump-disguised Romans in the Gaul forest. After each round you get a bonus level where Idéfix has to jump on bubble to bubble in order to get points. This marks the first time players could control Idéfix in a video game. The last level also offers a break from the usual platforming with the horse chariot race making a return.

The graphics and music are some of the best offered on the Master System. Graphically it does stray a bit from Uderzo’s usual look but in exchange we get to see a chibi-esque take on the franchise which fits quite well. Sega would again opt for this style in their Ghostbusters game on Genesis, which actually bears some resemblance to this game. All the levels are bright and colorful and offers something new in order to keep the game from feeling stale after longer play sessions. The music was composed by Takayuki Nakamura who would go on to become a prolific composer, scoring games like Virtua Fighter, Ehrgeiz and Lumines. The melodies are quite good, but none of them really hit any peak and lack a certain punch compared to what you would find in the Astérix arcade game. That said, it still holds up a certain charm and good vibe.

Despite being only released in Europe and Brazil, this is a game that should be in any serious Master System collection. It’s not just good when comparing it to other Astérix games, it’s good when taking the whole console library into account. It offers excellent platforming action, solid amounts of treasures and secrets to find, great controls, good music and tons of replay value.