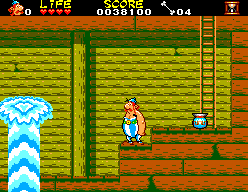 After the mixed results offered on the Nintendo platforms, it was time for Astérix to return to the console where his greatest adventures so far had taken place – the Master System. Tomozou Endo returned as a consultant and Sega of Japan once again handled the franchise in order to once again do it justice. Astérix and the Secret Mission was released in the last stretch of the Master System’s mainstream life.

Panoramix informs the heroic Gaul duo that disaster has struck – he has run out of the necessary herbs needed to brew the magic potion. Astérix decides to go on a secret mission to seek out the herbs worldwide so that César does not catch ear of the news and invades the village. But Obélix finds out his friend has just left and trails behind. Within this story elements lays the layout of the game. While the environments are the same ones we have explored in the earlier titles – Egypt, Rome, Gaul forest and the like – this game takes the dual character layout scheme from the first Master System title and greatly expands upon that feature. Astérix and Obélix play differently from each other with a different moves sets and strengths. Astérix relies on potions that are found lying around. The effects of these potions vary but the all share the common effect that Astérix can punch through blocks. Depending on its color, these potions can also create fields of fire and shrink objects. Astérix also has a dash and a pretty useful double jump which can be used to reach high areas and pass deadly gaps. Obélix doesn’t use any potions or power ups thanks to his permanent state, but he is much stronger, can slide down slopes, throw menhirs and perform a ground pound to break blocks and kill enemies. Basically, Obélix plays almost exactly like Mario.

This game cleverly tells its story almost completely through the gameplay. Astérix and Obélix take two separate routes to look for the herbs and therefore their levels are completely different though happen at the same time. A prime example of this is during the second level. If you pick Astérix, you will go surfing to reach the deck of the haunted Roman gallion since he hates being in the water. Obélix will go underwater and swim there before eventually going inside the boat. All the levels are different depending on your choice except Rome, as the cut scene before that stage shows our heroes meeting up again. Rome still has small difference to play to the character’s strength and abilities. 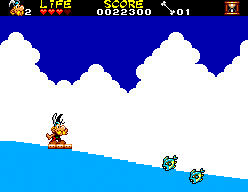 Sega did an outstanding job at making the visuals look incredible. The art style still uses the chibi styled framing of the characters, but they retain more of the expressions and style of movement that you would find in the comics. The game is loaded with bright colors, and each background looks and feels unique from the other, while they all fit into what one would expect from an Astérix adventure. On each stage you can find various items like roasted boar to refill your health, bones to use on a Idéfix minigame and feathers for extra lives. Graphically it looks and feels so sharp it really rivals the look of many earlier Genesis games, and certainly looks better when you factor in the appropriate use of the art direction. The controls feel responsive and all the moves are easy to pull off with no great issue ever arising. Astérix’s double jump sometimes doesn’t really have the desired height one might have been hoping for, which leads to some falls into gaps, but the game is quite generous with extra lives and checkpoints. In fact the entire game is a pushover and veteran gamers will probably go right through it on first playthrough. Luckily it’s a really fun and charming game. The music was done by Katsuhiro Hayashi and is great, though not earth shattering by any means.

A Game Gear version was also released though with no changes made to the game besides the zoomed in view to make up for the smaller screen. However a special box set was released for this version around Christmas of 1994 dubbed the Astérix 35th Anniversary Box which included a t-shirt and the Game Gear game in a nice looking box with exclusive art from Uderzo. This is now a sought after collectors item. 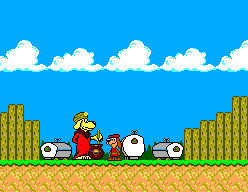 In Brazil, this game was changed into As Aventuras da TV Colosso, based on a puppet show from Brazil which was quite popular during the ’90s and still remains dearly loved today. I lived there in 2007 and it was still running in syndication with talks of a reboot being discussed. The boss of the channel is sick, and to be cured he’ll need a medicine made up from six rare herbs. But they can only be found in the wilds, and get them is a mission for Gilmar and Priscila, the lead characters. Graphics were slightly altered to make the enviorements more modern and characters changed to reflect the show’s cast. Most of the game remains just the same.