Zillion (prefaced with “Akai Koudan” in Japan – it means “Red Photon”) is one of the most innovative titles on the Master System library, an exploratory action game where most of the system’s titles were based on Sega’s arcade hits. It’s a tie-in with an anime series of the same name, which in turn was a tie-in to a Japanese laser tag game. The fact that the eponymous gun in Zillion looked just like the Light Phaser (Sega’s answer to Nintendo’s Zapper) was no coincidence. 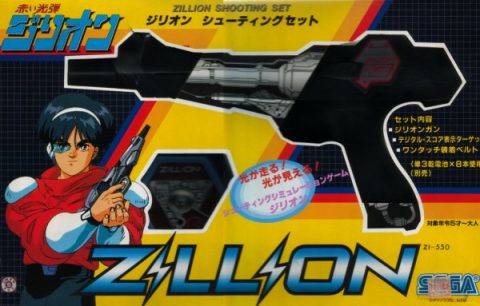 The game opens with a large-eyed guy with a bowl haircut pointing a gun right in your face. It is only perhaps two, maybe three seconds since you powered on the Master System, and the game is already threatening your life. That guy is the hero, J.J, whom you’ll be controlling through a good portion of the game. 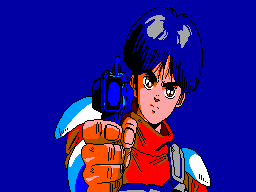 After a quick briefing by your omniscient commander, you’re off to infiltrate some base of some evil bad guys who don’t have faces. You begin on the surface of the bright green alien world. Charge forward and you’ll find the entrance to the base. Turn around and you’ll find the mother ship. Inside a cute little green haired girl who wishes you luck and recharges your energy. 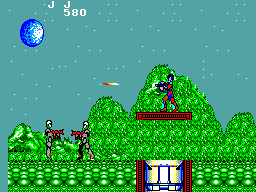 Zillion defies the traditional button mapping conventions by reversing the “jump” and “shoot” buttons, as was the case with a few other Master System games of the time, like Alex Kidd in Miracle World. Your characters jump with an awkward squat and a strange spring noise. Your Zillion gun fires a two-color projectile that travels approximately half of the length of the screen before dissipating.

This is pretty standard procedure as far as video games go, but the power of your shots is amplified, seeing that your gun has one of the most incredibly awesome sound effects ever to be produced by the Master System’s PSG synth. Seriously, it’s so powerful that it causes half of the instruments in the music track to just plain stop, a dramatic after-effect accidentally achieved due to technical limitations. When your laser beams connects, the tall, lanky Norsa soldiers explode in a fiery blaze, with an exaggerated sound that would suggest a minor apocalypse. It is pretty cool. 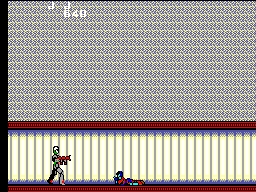 As far as the soundtrack, Zillion maintains the same upbeat tune throughout the entire game. This would be irritating, if it weren’t one of the catchiest pieces of music to come from the 8-bit era. Like the pleasant graphics, its peppiness betrays the menace that the game subtly exudes. Most of the music is based on vocal songs from the anime, and they’re perfectly suited for chiptune format. 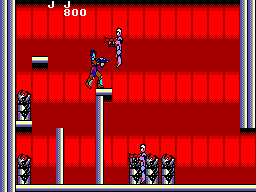 Zillion displays itself screen by screen. The early stages are a friendly light blue, the type of color that brings to mind a clear summer day or a baby’s bedroom. Except things are trying to kill you. Lots of them. Later levels are painted in a shade of red that is designed to both scare and anger. Hitting the pause button (annoyingly placed on the system itself, rather than on the control pad) will bring up the status menu, along with a portrait of J.J. As you explore, you’ll eventually find your comrades Apple and Champ. Highlight them, and they can be brought into action, each with their own statistics. Apple is fast but weak. Champ is slow but strong. Both can be upgraded by finding little Opa-Opa symbols hidden throughout the base. 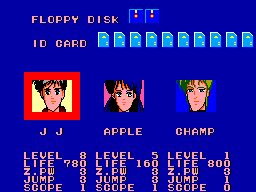 Unlike most fortresses in video gaming, where the hero can simply open the front door and waltz right through, each and every door in the Norsa HQ is locked. While it’s apparent that they value security, they are also stupid enough to leave the codes lying around in what appear to be trash cans. Breaking a can will reveal one of the codes, which you then must memorize. 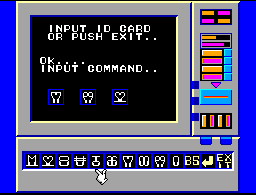 The game is only occasionally a war between JJ and pals versus robot soldiers – more often, it’s a battle of short term memory. (You can write them down, but this also slows the pacing considerably.) The symbols initially look foreign, but nearly all of them are mirror images of numbers, stuck together like Siamese twins. Luckily, once you’ve cleared a room and opened the door, there’s no need to remember anything else, until you’re on to the next room. Each room has its unique structure, even though there are only a few tilesets. There is a map screen, but it’s just a pointless grid that teases you with the prospect of organization. Ultimately, remembering your way around with landmarks isn’t too obnoxiously difficult. 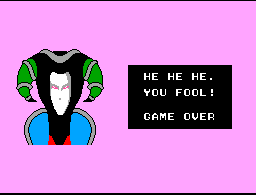 There’s no time limit, at least – however, there isn’t a password or save system either. The game must be played from start to finish every time you turn on the power, and that takes maybe two or three hours, depending on how well you know your way around. 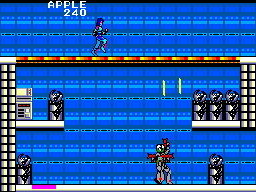 The intensity kicks into high gear once you find all five floppy disks and reach the central computer, and are expected to escape through the entire complex before it explodes. Hopefully you’ve become intimately familiar with the layout by now – you’ll need it to trace a path all of the back to the entrance. Continues are preciously limited – fail here, and that’s it. Screw up more than a few times, and the Norsa leader (whom you never actually get to fight) simply taunts you, and it’s back to the title screen. Naturally, this kind of finality isn’t likely to win it many fans in this day and age. But then again, its sluggish jumping controls or repetitive trash-can scavenging won’t appeal to many people either. It’s a throwback, and the challenges do feel a little artificial. But it’s the sort of game that makes you glad that Nintendo exists, if only so Sega could show up and try to do them one better. 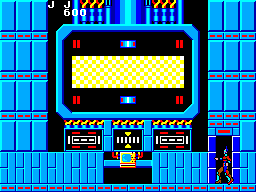 Even though Zillion was the closest Sega ever came to creating a game similar to Metroid, there are still substantial differences. It actually draws a lot from Epyx’s computer classic Impossible Mission. The color scheme and the elevator shafts of Zillion bear more than a passing resemblance, and both games feature computer terminals that can used to deactivate traps in each room. Sega obviously took the concept and elaborated on it, but its method of progression is more closely similar to Metroid, since Impossible Mission is fairly non-linear. You also couldn’t attack in Impossible Mission, while you can in Zillion – this obviously makes a huge difference. 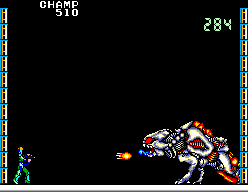 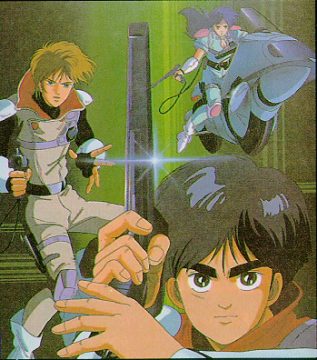 Zillion had well over thirty episodes in Japan, but only five of them (plus a extra-long special called Burning Night) were translated into English by Streamline Pictures. Some of the music used in the games is actually from the anime, complete with cheesy 80s synth and wailing Japanese vocals. The biggest disappointment is that J.J. is a moronic goofball, a failure who only runs with the White Knights so he could provide comic relief. In addition to fighting the Norsa empire, they also play in a band called The White Nuts, a particularly large bit of Japanese/English mangling. Seeing all of these characters animated makes for some decent fun, and Opa Opa from Fantasy Zone makes more than a few appearances. The tapes are kinda hard to find, but they show up on eBay every once in awhile, and can also be found on Youtube. 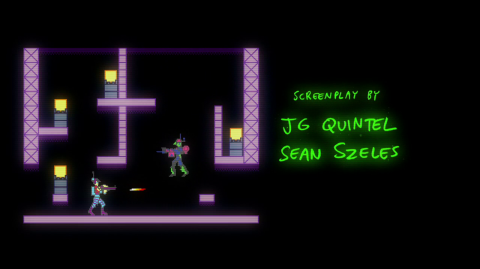 Most classic cartoons will either reference the Nintendo Entertainment System, or just some generic platform. Cartoon Network’s Regular Show is a bit different, in that the protagonists play something that looks a lot like a Master System, and every once in awhile, shows games that are parodies of Sega titles. In one of the credit sequences, there’s a image of a game that looks an awful lot like Zillion. Additionally, the manual for the 3DS Regular Show game is designed like a classic American/European SMS manual.