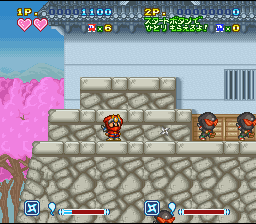 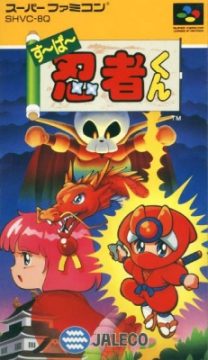 An update of the original arcade games, Super Ninja-kun features improved 16-bit graphics, a much larger variety of stages, boss battles, dashing abilities, and a two-player mode. Ninja-kun can now take several hits before he dies, and can even expand his life meter by grabbing heart containers found throughout the stages. The hero once again begins with the standard shuriken, but after beating a level, he is rewarded with new weapons, including bombs, lightning bolts, and more. When collecting spirits from fallen enemies, it charges a power gauge, allowing to unleash a variety of magic spells.

Overall, it’s a decent update, but it still just just comes off as a run-of-the-mill side-scroller. Curiously, this was published by Jaleco rather than UPL – considering how much they had stapled the Jajamaru name to just about anything during the Famicom era, it’s strange that they went back to the original name for this installment, even if it is closer to the original Ninja-kun than the Jajamaru-kun games. This is not to be confused with the American SNES game Super Ninja Boy, which is actually part of Culture Brain’s Chinese World series.