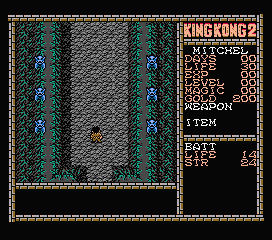 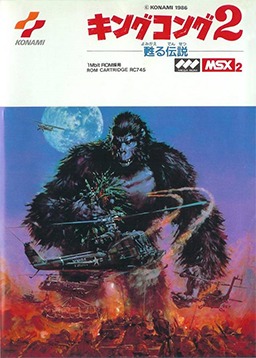 King Kong 2: Yomigaeru Densetsu (lit. “King Kong 2: The Legend Revived”), which was released after Megaton Punch the following year, could not be a more different game despite also being developed by Konami. To begin with the protagonist in this game is the human character Hank Mitchell, which may come as something of a disappointment to some who wanted to play as Kong.

After the title screen you watch Hank arrive on the island of Golnebo (as opposed to Borneo in the film) and that’s when it should be made clear that this isn’t going to be the light-hearted arcade-style fare of the Famicom game. Firstly on the right-hand side of the screen there is a panel with a list of statistics such as Life, EXP, Level, and Gold. Entering the hut in front of you you are told that in order to journey deeper into the island you must first consult the Village Elders for guidance, and this is when you realise that you’re playing an RPG, an action RPG to be precise in a vein similar to Falcom’s Ys, Telenet Japan’s Exile, and T&E Soft’s Hydlide series. If there is one genre that doesn’t leap to mind when one thinks of how a King Kong game would play it is certainly an RPG; yet it works so well in this case that it’s easy to get so immersed in the gameplay that you almost completely forget that you are playing a game with Kong in it. 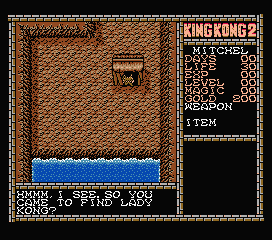 Visually, compared to the earlier game, the color palette of this game is significantly darker, with more greens and browns to match the jungle environment. The problem is that the explorer outfit that Hank wears is khaki, which can be a real strain on the eyes when almost the entire screen is brown. This is not just confined to Hank’s attire: almost everything in the game barring some enemies seems to blend into the background and if you are not paying attention it’s all too easy to be assailed by semi-visible enemies coming from all directions. Technically speaking the graphics are adequate for a game on the MSX2, so the sprites are not overly detailed with the exception of some of the larger enemies and bosses, though like many MSX games it does suffer from some choppy scrolling. If it is any consolation the audio in this game is once again fantastic, boasting catchy themes arranged by Konami’s in-house composers who would go on to make many of the recognizable tunes from Konami games that we fondly remember today.

The game handles as one would expect from an ARPG: the player controls Hank through different screens defeating enemies in real time to gain experience and gold. Experience is needed to level up with each increased level adding more hit points, as well as the ability to increase Hank’s speed at 10 level increments, which is something of a Godsend as the regular walking speed is less than tolerable. Gold accumulated from killing enemies can be used to buy weapons each of which only certain bosses are weak to which makes purchasing them essential (we will come to this shortly). It can also be used to buy one-use items such as herbs that restore a portion of your life and entering certain huts will let you rest, and therefore heal, for a fee.

There are two other statistics in the panel that are worth noting: Days, each of which lasts 45 seconds of real time and act as a timer which influences which ending you receive when you beat the game, and Magic Points! What has magic to with King Kong you might reasonably ask. In this game Hank can utilize magic scrolls given to him by the villagers which are used to defeat certain enemies. The disadvantage to this is that only Bucklers and Grassogres can replenish Magic Points: dying and continuing doesn’t reset your counter. 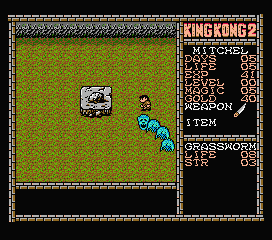 Golnebo is a fairly expansive island with much to explore, and more of it unlocks after you beat the bosses that roam the island. You don’t have to play for more than a couple of minutes to encounter your first one: a huge bear that wanders around and is impervious to any of your blows while in return giving Hank a severe beating. Unless you have played the game before without a doubt you will die at this point and be forced to restart. Fortunately continues are unlimited and barring MP most of your stats remain as they were at your death. This does not mean however that dying has little consequence. The player must conserve the amount of continues they use because like the number of in-game days they too have an impact on the outcome of the ending.

With enough searching the player will learn from some smugglers hiding in a hut that only an axe can harm the bear and only a knife will harm the giant spider and they happen to have both for sale. Quelle Surprise! Trying to buy the axe at this point is impossible even if you had the funds, which makes the bear boss something of a beginner’s trap. Getting the knife will still set you back 200 Gold, something which shouldn’t be underestimated. Make no illusions to get this kind of money and still be in a chance to get the better two endings it is imperative to grind, which seasoned RPG players will be accustomed to but somehow comes out even more as a chore. You will find yourself between screens defeating enemies to get gold and experience and occasionally the odd herb or two. The enemies in this game are a little more appropriate for the setting than Megaton Punch‘s gallery of rogues. Warthogs, giant worms, and poison frogs are all animals you would believe to be lurking in a jungle even if they have some strange alterations such as size and color. There are also what appear to be cavemen, though they may be supposed to represent tribesmen indigenous to the island.

The game has a consistent and natural progression: to defeat a boss you must acquire the necessary item to defeat it. How do you get this item? You follow clues from the tribesmen who live in the huts. How do you get more clues? You defeat bosses which unlocks more of the island to explore. Knowledge of the locations of items and weapons rewards the player by making it quicker to complete, which in turn increases the chance of attaining the best ending. There are three endings you can receive after rescuing Lady Kong: the bad ending if you take more than a year in-game to beat it, the good ending which you get from finishing the game in under 365 days and using 33 continues or more, and using less than 33 continues grants you the much coveted best ending.

With all this being said is the MSX2 outing worth playing? If you are looking for another RPG to play similar to Ys, particularly one that lies outside of the conventional medieval/fantasy setting, then yes. The fact that is a Konami title, in addition to boasting the King Kong franchise should only sweeten the deal. As an RPG it is more text-heavy than the previous game, and was never released outside of Asia. However since the late 1990s there have been several iterations of both English and Spanish translations, with there being an ultimate translation at the time of this article being written (the screenshots are taken from this translation) that also adds unused content from the game! Interestingly enough the game was released in South Korea under Zemina (of Super Boy infamy) with their own, albeit comically terrible, English translation, which also happens to supplant the Konami logo in the opening with their own.

While neither game hardly broke the conventional mold of their respective genres both are considered to be enjoyable games, being fondly remembered in their home country and garnering a cult following overseas with the growing use of emulation (the demand for their fan-translations should be proof in some way of this). The Megaton Punch iteration of Kong was one of the cast of Konami characters in the Famicom game Wai Wai World, such was his standing that he was considered as much a Konami staple as Goemon and Simon Belmont! Unfortunately it was also his last outing under Konami, and would have also been his last video game had the tie-ins to the 2005 Peter Jackson King Kong movie not been released, of which the Xbox 360 version is considered the definitive title.