A little known platformer for the Super Nintendo known as Run Saber went under the radar when it was released. It was developed by Horisoft and published by Atlus. Run Saber plays a lot like the Strider games, which probably explains why it’s such a fine game.

In Run Saber, crazy scientist Gordon Bruford mutates himself with a big load of radiation and creates an army of mutant minions. Other scientists team up for the Run Saber project in order to create super soldiers to foil Bruford’s plan for world domination. One of the Sabers, Kurtz, becomes defective and runs off in a state of homicidal insanity. The remaining Sabers, Allen and Sheena, are sent into the fray to stop Kurtz and Bruford. 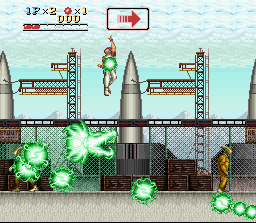 The flow and control of the gameplay is very similar to the first Strider game. As a matter of fact, not unlike Hiryu’s arcade debut, Run Saber pits the player against five stages of action. They’re all a bit longer than the average Strider stage, and the game does not end as quickly. The first level is fought at the Taj Base, a military stronghold overrun by Bruford’s mutants. Tong City is next on the map, a futuristic-type Chinatown area that sets the stage for the first battle against Kurtz. Taking a break from the industrial overtones of the game, stage three is set in Jod Valley, where the wrath of nature (and the occasional giant missile) ravages the heroes. After that is the oddly-titled Grey Fac, where falling gears and conveyor belts await, as well as a rematch with Kurtz. Finally, the player stumbles upon the mysterious hideout of Bruford, which is a very typical Giger-esque final stage that wouldn’t look too out of place in a Contra game.

The graphics are reasonably good for a Super Nintendo game released around the middle of its lifespan. The use of colors in this game are a bit dull at times, but that compliments the atmosphere, which is that of a bleak, post-apocalyptic, industrialized Earth. A fine example of Mode 7 is displayed in the first boss fight, which takes place on a stealth jet that has baddies popping out of it. In the middle of the battle, it flies upside down, forcing the heroes to hold on for dear life. After destroying the last beast on the jet, it twists around in the background before exploding. Sadly, Mode 7 is only displayed here, on the third stage boss, and the map sequences in between stages. The graphics overall could have been better, but they’re good enough for the SNES. 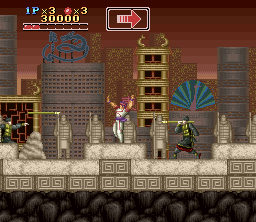 The sound isn’t too shabby, either, even though like the graphics, it’s nothing special. The first level music sets the tone for the rest of the game with a fast-paced beat that gears up for butt kicking. Another great tune plays in Jod Valley, which is a primal rhythm that suits the jungle atmosphere given by the stage design. The sound effects are pretty good too, with typical slashes and explosions, as well as the yells and growls from enemies.

The gameplay is a dead ringer for the arcade Strider, but it improves on the original in several areas. For starters, there’s the choice to play as either Allen (who has the horizontally-slashing Thunder Saber), or Sheena (who has the vertically-slicing Ice Saber). They both walk at a decent pace and can run by tapping the control pad twice quickly. They slash with their sabers as fast as the attack button is tapped, and they can jump fairly high. They can even climb on walls and ceilings, and by pressing a separate button, can slide along the ground. Allen and Sheena have a few abilities that the Strider does not possess, such as a rolling jump that surrounds them with energy in order to take out aerial enemies, a diving kick which allows them to bounce off the heads of antagonists, and a separate button can destroy everything on-screen with a special attack. Allen sends out a menacing green dragon to rove the screen and consume all enemies, and Sheena sends out a  blizzard of painful ice crystals.

Since there’s two Sabers for play, that also means two-player simultaneous action! Any Contra fan should give Run Saber a try for the ability to tear through Bruford’s army with both Allen and Sheena at the same time. The game’s challenge remains more or less the same, nor matter if it’s one player or two. Run Saber is not overly difficult, either way. There are a few moments of frustration (such as the aforementioned falling gears in Grey Fac) and continues are limited, but on normal difficulty settings, it’s never overwhelming. While they start out only able to take three hits, the Sabers can extend their life bar by two points (up to a maximum of eight) with blue medkits, and restore one unit of life with white ones. Blue saber powerups increase the range and power of their weapons, pink spheres give them an additional special attack, and icons of their heads give them a bonus life. 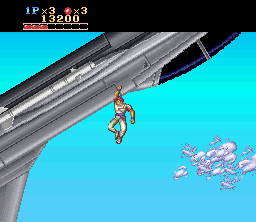 The level designs are good; full of enemies, traps, tricks, twists, and turns. Above all else, the bosses of Run Saber are the dominant feature of the game – every stage has at least three of them. One starts out as a mere hawk, which is a pest to get rid of but can be easily taken out. However, after defeating the bird, its severed head remains on screen, as a robotic body snatches it and flies away. Later, the hawk’s head returns, grafted onto the robotic body, and now the heroes have to deal with a kung-fu fighting robot-hawk-bird-cyborg thingy. Allen’s right there on the box art doing battle with the bionic bird. Some bosses are more challenging than others, but there are many innovative designs among the rogues gallery. Sadly, the powerful special attacks can make things a bit too easy at times, and the final battle against Bruford, as awesome as he looks, is a bit disappointing. 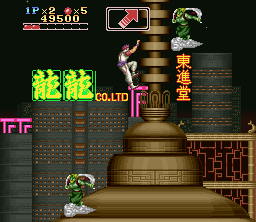 Despite the shortcomings in the challenge department, Run Saber is nonetheless a solid action title. It certainly makes a better Strider game than Strider Returns.

When Run Saber was originally revealed, it showed one of the bosses as a large reclining woman. She was changed into a zombie monster in the final release, purportedly at the request of Nintendo of America. The game was, oddly enough, not released in Japan, so there is no uncensored version available. There is a ROM available marked “Beta”, but does not contain the original boss. 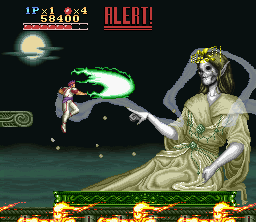