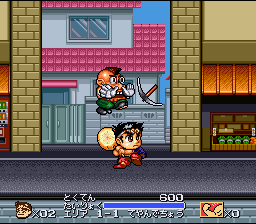 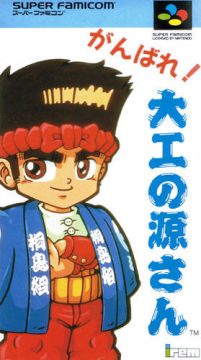 On the surface, the Super Famicom Gen-san game might be the closest you can get to the arcade version, but that’s really not the case. The graphics, while decent, are more colorful and cartoony than the original arcade, but they’re lacking the high quality pixel art that Irem was known for back in the day. The backgrounds graphics are banal, but some of the bosses consist of bizarre characters, like a chainsaw wielding housewife, a bearded skater dude, and a Japanese business who wears a robotic suit. The levels have been expanded to add more vertical space, but the designs are fairly dull and straightforward. 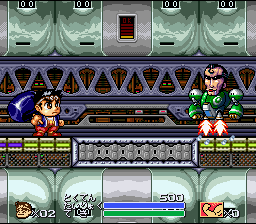 Part of this is because the game’s just too easy. Gen has a huge life meter – much larger than the Famicom or Game Boy games – so most of the game feels like an insignificant breeze. There are a couple of stages where you ride on a motorcycle, although these are also short and simple. There are some new power-ups, like different colored vests to absorb more damage, and pants to make Gen jump higher. You can also find “muscle” icons, which allow you to use a special attack which somehow causes the hammer to shoot sparks. Unfortunately, you can no longer block enemies by ducking. Technically Ganbare! Daiku no Gen-san plays well, but its setting is dull compared to the Gameboy games, and it ultimately comes off as middling.