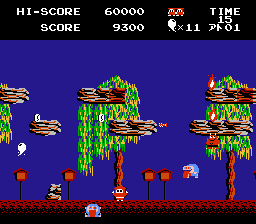 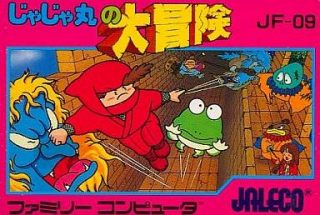 Much like the second Ninja-kun game, Jajamaru no Daibouken (“Jajamaru’s Great Adventure”) ditches the vertically oriented levels in favor of more traditional side-scrolling stages. The gameplay remains more or less the same, although the goal is simply to make it to the end of each level rather than killing everything. Certain blocks can be destroyed by jumping into them, which either hide coins (good), bombs (obviously bad), and on rare occasions, your faithful frog, that’s it. The lack of power-ups is a bit disappointing. 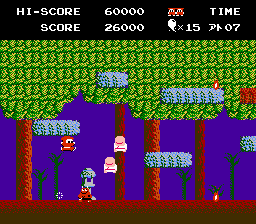 At the end of each stage, you fight a boss monster in the forest, which is similar to the bonus stages in the original Jajamaru-kun game. Although the controls are better and it feels less sloppy than the first game, it loses some of its appeal, considering you can just run past most enemies to get to the end. Like its predecessor, it also shows up in emulated form on the Jajamaru Jr. Denshouki Jaleco Memorial for the Game Boy Advance.