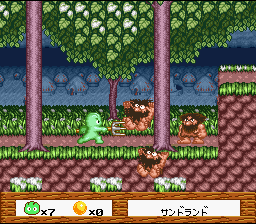 The third title in the Valkyrie series, strangely, doesn’t actually star Valkyrie. Instead, it focuses on Krino Xandra, the second player character from the Legend of Valkyrie arcade game, who was an NPC in the original game for the Famicom. The translated title is “Xandra’s Great Adventure: Encounter with Valkyrie”.

The story is actually a prequel, before the days of Xandra adventuring together with Valkyrie. In the far-off region of Marvel Land (a reference to the Namco arcade/Genesis game of the same name), lies the country of Zandraland. Unfortunately, it’s been beset by a terrible plague, which has afflicted his young son. Being the good dad that he is, he sets off to save his family and find a cure, which eventually leads him into encounters with the demon lord Zouna. Valkyrie doesn’t really appear through most of the game until the ending, other than appearing on the password screen, though some other familiar characters pop up, including the (mostly) friendly Quarkmans. Sabine, one of the characters from the other games, also appears here as a kidnapped child. 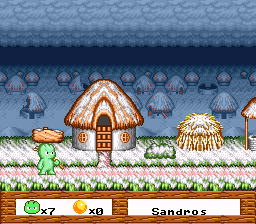 Despite sharing the universe with the Valkyrie games, it’s almost entirely unrelated in every other way. The perspective has changed to a side-scrolling view. Xandra’s main weapon is a trident, which can used in a straightforward manner to stab enemies, but he can also use it to attack from above and jab bad guys on their head. He also has a few special jumping skills, assigned to separate buttons – these let you either jump extremely high, or activate a whirlwind technique to spin through enemies and obstacles.

The visuals do a good job of adapting the style of the Valkyrie games from the Super Famicom, and they’re probably a bit better, especially considering the arcade game. The artwork is provided by the same person, Hiroshi Fuji, who had also worked on some other Namco games like Tower of Babel and Sky Kid. But despite the cute character designs, the game is extraordinarily difficult, and not really in a good way. It feels out of place, more like an Irem arcade game than a SNES action game.

The biggest problem is that Xandra can only take a single hit, and getting killed when send you back to the beginning of the area. Even Ghosts n’ Goblins let you take two hits of damage! You do have a generous supply of lives, plus you can restart levels with a password, so if you’re tenacious, you can still make it to the end if you’re willing to practice and memorize the levels. But another issue comes with Xandra’s special moves – there are LOT of things that will temporary stun him, which leaves him open to danger. If you try to jump on an enemy with your spear and miss, you’ll get stuck in the ground for a moment, at which point the next enemy can easily dispose of you. If you miss something with a whirlwind attack, you’ll be knocked dizzy for several seconds, at which point you’ll be lucky to recover if something else doesn’t get you. Jumping or falling too far will daze you for a split second, and even that short amount of time is enough to put you in perilous danger. There are even a few auto-scrolling levels, where these tiny moments of inaction can squish you. 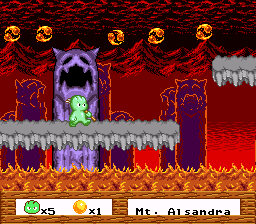 One of the only connection to the main series, beyond the characters, are the framed cutscenes that introduce and bridge each level, and even those are not particularly unique to 16-bit action games. (The shadow of Valkyrie does appear in the password screen, at least.) Some areas have minor puzzles you need to solve (such as using your whirlwind attacks to help another character open a door), which does break up the action nicely. The perspective has switched to a side-scrolling one, and most of the RPG elements, outside of the occasional dialogue sequences with NPCs, are gone.

Additionally, there are some dialogue branches at some point. It’s usually obvious what you’re supposed to say to advance the story, but if you make incorrect decisions, you’ll automatically be tossed into a dark, alternate ending. For example, in the second stage, you’ll come across someone trapped in a cage, and begs to be let out. His captor emerges and tells you that he’s a criminal, and not to listen to him. Since you are supposed to be a good guy, the correct action is to free him (you’ll have to fight the guy who captured him anyway, though he ends up joining your side anyway). If you refuse to let him out, then all of a sudden Xandra gets cursed, and ends up turning evil. Altogether, these are often so strange that they’re all worth seeing just for the shock value alone, even if they are essentially fancy game over screens. Unfortunately, continues are also limited, and running out of them will also trigger one of these bad endings.

There are eight levels in total, each having three or more sections, and due to the extreme difficulty, it can take a very long to get through all of them. But there’s a big variety of stage types, starting from the forests of Xandraland, through the caves of Alxandra, into the Castle of Caldera, over the ocean, through mazes of Neverland, and finally to the desert for the final encounter. Together with the evolving stories and NPCs, it does give the grandiose sense of adventure, even though the game itself really is little more than a side-scroller. Still, in spite of its charms, it’s hard to really appreciate due to its frustrations. 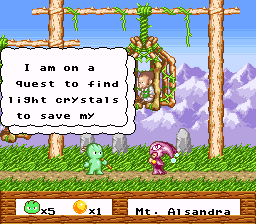 Xandra no Bouken was released translated into English in Europe, which renamed the game and the hero Whirlo (due to his whirlwind attack ability). Some of the other names have been changed too – the town is named Sandros, the demon lord is now Malix, and so forth.  The cover ditches the Japanese art and replaces it with the sort of goofy character designs typical of American cartoons of the 90s.