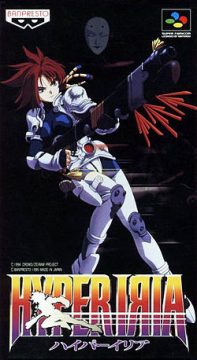 Ever since the late days of the Atari 2600, video game adaptations of non-video game properties have firmly entrenched themselves in the gaming landscape. It’s easy to understand why: games being a lucrative industry, a game adaptation can serve as a good opportunity to get your name out there and reinforce your brand. That’s why the 1990s, an especially fruitful decade for the industry, saw an abundance of such adaptations; some even based on the most obscure of properties.

Take Hyper Iria, for example. It’s based on a cyberpunk anime OVA, which is itself based on an obscure action movie about a female bounty hunter and her quest to take down the Zeiram. For the most part, there’s nothing particularly notable about the game. It did receive a fan translation in 2016 by Dynamics Designs and Matt’s Messy Room, although the translation itself isn’t that notable, either. It can either be too liberally translated in places or too literally, resulting in a lot of awkward dialogue. It was developed by Tam Tam, who worked on a few other anime tie-in games, noteably the Tenchi Muyo!! Game-hen strategy RPG for the Super Famicom and Bishojo Senshi Sailor Moon Collection for the PC Engine. But to return to the actual game, Hyper Iria is emblematic of licensed games during the 90s. That’s not to say it’s an outright bad game. If anything, it’s a competent one: Hyper Iria is decently built, and there are a few alluring moments here and there. However, the game’s noncommittal attitude toward game design means it will never be anything more than “competent.”

Narrative-wise, Hyper Iria appears to take place some time after OVA, itself a prequel to the live action Zeiram. The eponymous heroine is still tracking down the alien creature Zeiram, and the player only knows Bob as a computer program (and minor gameplay feature) that guides Iria to her goals. By far the most immediate of the game’s accomplishments is how well it captures the source material’s aesthetic. From the moment you start the game, you know what kind of experience it’s going to be. On the one hand, Hyper Iria opens to very strong anime artwork, whether it’s the clearly rendered lines or the smart use of color to round everything out. More interesting, though, is how all of this is presented. There’s a strong emphasis on tight cinematic pacing and manga-like composition. You’re not given all that much time to process these images before they flash out of existence. With these sense of movement and energy, the game is able to communicate its action-y ethos long before you step foot into any of the levels. Once you do, the music’s casual yet upbeat rhythm ensure the game can maintain that energy well through your adventures.

Unfortunately, for all the energy Hyper Iria puts into imbuing its aesthetic with so much character, the game has no idea how to do the same when it comes to play. The odd thing is that the game already has a workable plan in front of it. The game itself is a mixture of James Bond-style spy thriller and monster-of-the-week style anime, all filtered through your standard 2D action fare. You guide the titular Iria through a series of hallways, using various accouterments to take down alien foes and to scour the area for whatever goal needs to be accomplished. Maybe there’s a monster that needs destroying, or maybe you need to meet up with somebody in a discreet location.

Whatever the case may be, Hyper Iria at least gives the impression that it’s aiming not for the intense action its contemporaries were known for, but for something altogether more methodical. Before you even enter a level, there’s an entire pre-planning phase where you pour over your load-out, review the mission plan, and plot out in exact detail what you’re going to do once you touch down. Once you enter a level, the game appears to reinforce that with quiet hallways and deliberate pacing, each one communicating the kind of intrigue you’d expect from a Metal Gear Solid game (albeit in a more action-oriented setting).

Notice, though, how Hyper Iria never quite captures that substance. It appears to, or it gives the impression that it does. What keeps the game from realizing its full potential? Mostly a lack of ambition; one that keeps Hyper Iria from pursuing anything too strongly. This isn’t a minor problem, either, but one that’s detrimental to the game’s very being. Any accomplishments the aesthetics achieve find themselves without support. For as good as the art is at creating a sense of place, the level design surrounding it ensures each location will feel so indistinct that separating one area from another becomes impossible. (The developers seem aware of this problem, too, considering how much guidance they give you through your partner.)

Meanwhile, any potential the gameplay has falls to waste. Unwilling to reinforce its brief spurts of urgency, movement through the levels feels rigid and business-like, as though it’s just a tool to get from point A to point B. Your weaponry suffers a similar fate: not only do they find themselves with a strong physical presence, but because you can get through much of the game without using your weapons, the fights end up lacking any real character. In fact, Hyper Iria as a whole lacks character as a result of these flaws. You don’t play the game because doing so fosters a stronger emotional connection to the events on screen or because of some reward you get for completing these challenges. You do it simply to pass the time.

This failure isn’t because Hyper Iria lacks the tools it needs to achieve something better; it clearly has those. Nor is it because the game lacks challenge. If anything, it’s a moderately difficult game to complete. Instead, Hyper Iria simply doesn’t know what to do with the tools it has on hand. This doesn’t preclude the game from finding success, but it does guarantee that said success will be very uneven as a result. The aforementioned spurts of agency are a good example, but the brief shoot-em-up interludes are an even better one. Simple though they may be, they’re dense and full of action; well defined enough to stand out as the most memorable parts of the game. You just wish the rest of the game was as solid as these brief moments are.

Despite its mediocrity, Hyper Iria has a reputation amongst Japanese gamers, and cartridges are now fairly expensive to obtain. Though there technically was not any sequel, there was another game based off of Zeiram, called Zeiram Zone for the PS1. It’s a 3D beat-em-up which isn’t nearly quite as ambition as its SFC forebearer, and eschews the 2D animation of the anime in favor of bad CGI cutscenes.