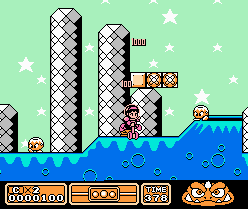 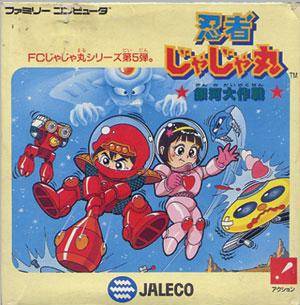 After dallying in RPG land for two episodes, Jajamaru finally returns to the world of side scrolling in the fifth and final Famicom game. A lot has changed since the original games, though. For starters, it looks and feels like a huge Super Mario Bros. 3 clone. The graphic style is extremely similar, and the status bar is almost exactly the same. If that wasn’t enough, it plays very much like Nintendo’s classic – even though Jajamaru’s favorite weapons in the past have been shuriken, here he can only kill enemies by jumping on their heads. Similarly, you can only take a single hit before croaking. By holding down the B button, you begin running in place, allowing you to dash forward and make higher jumps. If you hold it down for a few seconds, you begin somersaulting, which makes you temporarily invulnerable. You can find power-ups by hitting blocks with your head, although you can jump on them too. Some of these powers include a special star that bounces along the ground when thrown – in no way in similar to the Mario’s fireballs – an item that makes you temporarily invulnerable, and the ability to transform into a giant mechanical frog, perhaps the only real evidence that this is linked with any of the past Jajamaru-kun games. You can also find a space suit that protects you from one enemy attack. 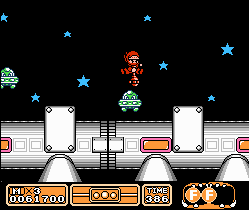 A space suit? Yes, Jajamaru and friends have left behind the cartoonish world of Ancient Japan for outer space, where a whole bunch of vegetable themed planets have come under attack by evil forces. (The subtitle translates to “Epic Galactic Battle”.) It allows for a few interesting levels – the hot pepper planet, for example, is the stereotypical fire stage, and standing in place for too long results in burned feet. You can also play as either Jajamaru or Princess Sakura, although their abilities are essentially identical.

It’s pretty clearly a rip-off, but while it lacks both the depth and brilliance of Super Mario Bros. 3, it’s still a fairly decent platformer. Jaleco had meant to bring the title to America under the name Squashed, and they littered the dialogue with terrible, terrible vegetable based puns. They also renamed the main characters Maru and Cori, although otherwise it would’ve stayed mostly identical to the Japanese version. Although the game was canned before released, a prototype resurfaced later.