Rainbow Bell Adventures takes an unexpected turn for the series, changing genres from shoot-em-up to side-scrolling platformer. TwinBee was a great candidate for such an experiment, given the anthropomorphic look of TwinBee and WinBee (they didn’t even have to add any legs!), and the extraordinary effort spent on the character design. Someone at Konami must have thought that Shuzilow’s popular characters were wasted on shooters only, as Rainbow Bell Adventures is just the first of several incursions into other genres…and the best one at that. One couldn’t go wrong with platform games back then. Just like Street Fighter clones, no matter how many were released each month, people kept buying them. Of course, Mario & Sonic were the supreme kings among a glut of mediocre games. Thankfully, Rainbow Bell Adventures is much better than your average platformer. 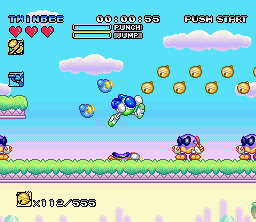 The premise is classic: seven magic bells keep balance in the universe, but the evil scientist Warumon steals them in order to conquer the world. So you have to get them back and save Princess Melora once again.

The gameplay follows the genre’s rules that were established by Super Mario Bros. Enemies can be killed by jumping on them, or by attacking them with one of your weapons. There are two charge abilities – by holding down the attack button you can unleash a super punch, while holding down the jump button will activate a rocket boost that will send you dashing in any of the eight directions. The flying mechanics work similarly to Konami’s Rocket Knight Adventures, where you can bounce off walls and ceilings chaotically. One of the biggest differences is that you can boost infinitely, without having to touch the ground. A few levels don’t even have ceilings, so you can continue to rocket upwards, out of the stratosphere and into outer space, with a gauge indicating how far you are away from the surface of the planet. There’s nothing up there, but it’s really cool to try! It does come with a few quirks though. Since the dashes are charged by the jump button, you can’t jump and then boost, making it somewhat hard to aim. Some stages are also set up with “gotcha” obstacles, like spikes that are impossible to see before you collide with them. 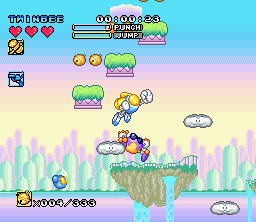 You can chose between TwinBee, WinBee, and GwinBee. They each have different primary weapons, and the time it takes to charge punch attacks and rocket dashes differs as well. WinBee is built for speed and uses a whip-like ribbon, GwinBee is the powerful type and throws rattles, and TwinBee is the balanced type, equipped with a short-range hammer.

The stages are huge, and in some cases can wrap both vertically and horizontally. To aid, a map screen is available to indicate your position as well as the exit, though since it’s only displayed as a barebones grid, it’s only a little useful in the levels that have lots of warp doors or twisty maze-like passages. There are several colored keys to find, which will open up doors of the corresponding color. Once a key is found, you can revisit completed stages to open up previously inaccessible doors.

You have a life meter, consisting of three hearts. Each level is filled with tiny bells, and collecting 100 of them will regenerate a heart. Destroyed enemies will also drop larger, colored bells, which will grant power-ups. These include equipping your character with their signature weapon: a pistol for long distance attacks, the classic shield, invincibility time, shoes to stomp harder, bunshin Options, and homing missiles. Getting hit will cause you to drop all of your colored bells and lose these power-ups, though they can be regained if you pick them up before they fall over the screen, Sonic the Hedgehog-style. There are also hidden sprites, usually a few in each stage. 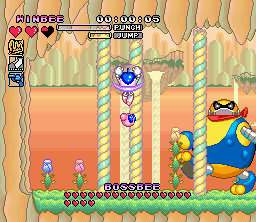 Rainbow Bell Adventures also lets you play simultaneously with a friend. In most-two player games, the characters are usually constrained to the same screen, which means that you can’t ever go too far away from your partner.  Here, the camera follows the one taking the lead, and if the other player is left behind, their position is indicated with an arrow at the border of the screen. They can then force the screen to switch back to him with Select button, or teleport themselves near the first player with the Y button. Apart from the standard quest, there’s also a Battle mode in which you must fight a friend. The screen splits in half, and some deadly weapons were designed expressly for this mode. 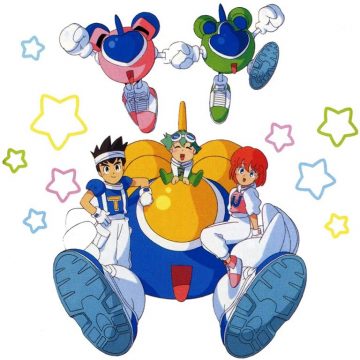 The game does have its flaws. It could have used more enemy variety, as always fighting the same type of Warumon’s Evil Bees gets boring quickly. The biggest disappointment is the music, which aside from a handful of nice tunes, is nowhere as high-quality as the previous TwinBee titles. Still, it’s easy to love this game for its many little nice touches. The main sprites are wonderfully animated, and the personalities of the Bees get to shine in ways that they couldn’t in an overhead shooter. The expansive levels and numerous hidden items allow for a high level of replayability, without falling into collectathon territory.

The Japanese version of the game has a battery backup that keeps track of your progress, like the best time for each stage, fairies collected, etc. This is important, as there are different endings depending on your performance. The European version uses a password system instead, which doesn’t keep track of any of this additional data, leaving it with only one ending. The map screens are also different. In the Japanese version you can choose stages in a non-linear manner, as completing a level will unlock the stages surrounding it. In the European version, progress is completely linear. There’s also some text in the Japanese version, mostly conversations with the cast and Dr. Cinnamon before entering a level. Most of this has been cut from the European version. There’s a fan translation patch for the Japanese ROM which lets you play the game entirely in English, so you don’t have to deal with the downgraded European version.