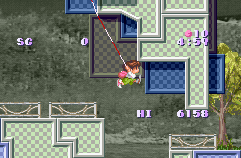 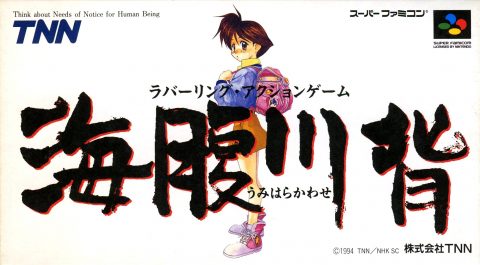 Umihara Kawase is a strange little game series about a girl and her fishing pole. It’s a puzzle platformer revolved almost entirely around using her bouncing wire to navigate through obstacles and avoid enemies. The series has a very low budget, surreal feel to it, but the bizarre aesthetics combined with the unique mechanics and crushing difficulty have earned it a high level of cult popularity over the years. The series is largely the brainchild of Kiyoshi Sakai, the designer and programmer, with artwork by Toshinobu Kondo. The heroine, a sushi chef, is also named Umihara Kawase, an abbreviation of a Japanese idiom, “Sea fishes are fat in the belly, river fishes are fat in the back.” 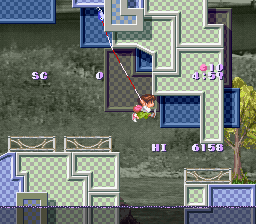 The crux of the game relies on the swinging mechanics, similar to Super Metroid or Bionic Commando. However, the physics don’t really work the same way, particularly because of the bouncy, rubber-like nature of the fishing wire, allowing you to swing and propel yourself in crazy directions. Don’t question why she has it or how it works. The play control is the true reason why everyone shows it so much love – it’s spring-pendulum physics, for anyone familiar with Lagrangian mechanics. You can attach to nearly any surface and solve each level in your own way. There are a lot of different tricks that evolve out of this: hooking ground for momentum, scaling a straight surface, hooking around ledges, balancing your weight against a giant fish, the list goes on. Some people call it a “rubbering action” game, and it fits.

In addition to the platforming, there are also enemies roaming about, usually giant walking fish. These can be stunned with your wire, and can also be reeled in and shoved into Umihara’s backpack, permanently killing them. They tend to be a nuisance, especially since they respawn randomly, seemingly at the worst times. There are boss “fights”, which usually just involve avoiding some gigantic enemy for a few minutes until it leaves. 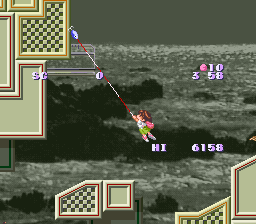 The game is also draconian in difficulty. Everything kills you in one hit, bottomless pits haunt your existence, and the game demands incredibly crazy stunts just to barely survive. There’s no continue or save game function, so once you’re out of lives, you need to start from scratch. Yet, it’s very manageable with some practice; veterans can make this game look really easy, which seems unfair to the rest of us amateurs, and it’s a favorite amongst speed runners.

The presentation is certainly thin to the bone. It uses badly pixellated black and white photos for backgrounds, simplistic tilesets, and cheerfully dull music, which is immediately obvious to anyone who has played a Korean MMO. The surreal landscape, backgrounds aside, is also quite charming. You’re a cute schoolgirl surrounded by gigantic vegetables and school supplies as you look for doors and dodge flying fish, oversized eels, walking salmon, and who knows what else. It’s the very essence of “Cute on LSD”. There’s no real story or much of anything, not even an ending. You just walk through some door that looks like any other level exit, and then the credits roll.

Many levels in the game feature branching paths, allowing you to follow an entirely different set of levels. Certain fields are accessible only through hard-to-reach secret doors. This, coupled with a never-ending learning curve to the physics, gives Umihara Kawase tremendous replay value. 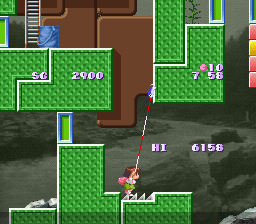 Umihara Kawase is something of a fluke in the industry. It was produced out of thin air by a small, unknown studio named TNN, and published by NHK, a Japanese television station of all things. In the end, the game never sold that well. The studio itself quickly dried up after coughing out a boring soccer simulator. That’s where the tale of Umihara Kawase should have ended, too, if it weren’t for its cult popularity. 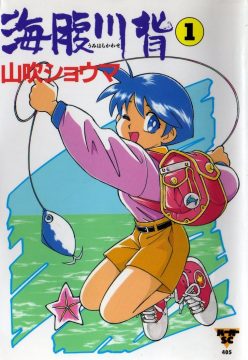 A manga based on Umihara Kawase was published around the time of its release. It was drawn and written by Shouma Yamabuki, and published in Comic Burger. Eight chapters were compiled in tankoubon format in 1995, though the two final chapters are missing. Obviously, this was a strange choice for a manga, since the game barely has any plot. The protagonist, Umihara (whose name is spelled with different kanji than in the game) is a young stowaway on a cruise liner, who comes to its defense when it’s attacked by a mysterious organization. Of course, she attacks using a long fishing wire. The surreal nature of the games is not represented at all. In fact, outside of the main character, it has nothing to do with the property it’s based on. Like any comic aimed towards boys, it also has awkward fan service nudity.