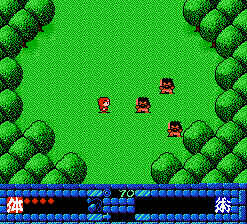 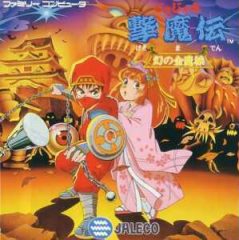 The fourth Famicom Jajamaru-kun game (the subtitle “Legend of the Demon Attack Jajamaru: The Illusionary Golden Demon Castle”) is an action-RPG that borrows heavily from the original Zelda game. Each chapter consists of a small map, which usually contains a few towns and dungeons. It gives a sense of non-linearity, although you still need to tackle all of the events in a specific order.

The levels are all pretty simplistic mazes, and there’s really not much in the way of puzzles. All you do is run around and swat at enemies until you stumble upon the stairs to the next level. Although you regain health regularly, the bad guys are very stingy with coughing up cash when they die, which can get really annoying when you’re trying to buy something. In addition to your standard chain weapon, you can buy shurikens, and eventually you learn a number of jutsu techniques. 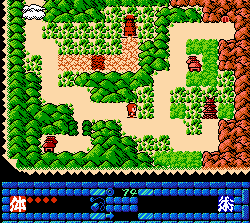 The cartoonish atmosphere of the earlier games has been ditched in favor of a more serious tone. The music is also particularly grating. It’s a pretty blase game overall – Ninja Taro on the Game Boy is actually better.