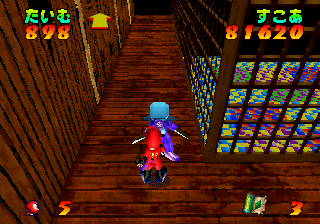 Jajamaru-kun and friends were practically everywhere in the 8-bit era, but other than the lone Super Famicom Ninja-kun game, he was pretty quiet during the 16-bit days. Jaleco then attempted to reimagine him in 3D for the 32-bit era on Saturn and Playstation, with the subtitle “Demon Killer Ninja Magic Scroll”. It tries to keep the cute and goofy aesthetic of the old games, although the numerous CG cutscenes are embarrassingly dated, and the designers forgot Jajamaru’s most memorable aspect – his huge, distinctive eyes. Although most of the stages are your traditional Japanese-style levels – villages, graveyards, etc. – some of the enemies are a bit weird, particularly the one-eyed basketball playing demons. It actually looks very reminiscent of the N64 Mystical Ninja games. 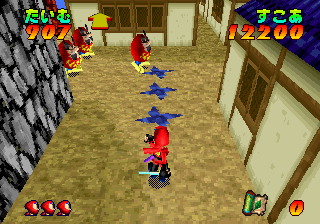 The game itself is a pretty standard 3D action-platformer – just get to the end of the level while killing bad guys along the way. By default, the camera always faces forward, so Jajamaru automatically strafes when moving left and right, which makes it a lot easier to control than most 3D games. The view automatically rotates at 90 degree angles whenever you hit a turn in a hallway, although you can also adjust the camera with the trigger buttons. Like the old games, Jajamaru’s main weapons are his shuriken, although he can also find a number of spells to attack all of the enemies on the screen and such. There are boss encounters every few levels, which are a bit harder to deal with – the camera tries to stay focused on the enemy, so you’re constantly circle strafing them. Unfortunately, it tends to get lost or hung up, which makes dodging their fire pretty annoying. The platforming aspects are awkward when they show up, but they’re relatively rare. 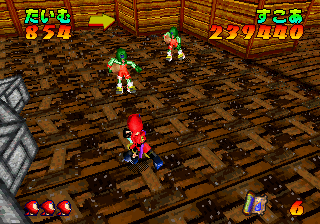 It’s a pretty simple and straightforward game, and surprisingly avoids most of the control faults associated with early 3D action games. However, it’s not particularly pretty, and its simplicity also means that it’s quite easy. There aren’t many levels, so it can be quickly conquered without much time or effort. It’s a bit hard to find for either platform, and while it’s agreeable, it’s not compelling enough to justify searching for. Although the PlayStation and Saturn versions may look identical on the surface – they have the same cover, and the same cutscenes – the level layouts are different in each version. Also, the Saturn version is technically an updated version, as it was released later, denoted by the “kin” after the name, meaning “gold”. It has a map screen, where little old school sprites of Jajamaru, Princess Sakura, and the Catfish pirate show up. Every few stages, you’ll also get to play a level of the original Ninja Jajamaru-kun game, just to remind you of its heritage.