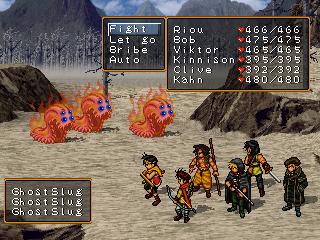 Originally, Suikoden was meant to be a standalone game, but due to its surprise success, Konami greenlit a sequel. Suikoden II is set three years after the original; this time the focus is on the City-State of Jowston. The main protagonist is a young boy named Riou (though again, he can be named whatever the player wishes). He and his friend Jowy are part of the Unicorn Brigade, an army composed of youths who serve the Highland army. The City-State of Jowston has negotiated a ceasefire with the Highland Kingdom, but just when everything seemed to become peaceful, a flurry of arrows rains down the camp. Chaos ensues, and Riou and Jowy discover a shocking truth behind the attacks – it seems that the one responsible is none other than Luca Blight, the prince of the Highlands. After learning the awful truth, Riou and Jowy run for their lives and blindly jump down into a river. Little do they know that the currents that separate them will forever change the destiny of the two lands. The former best friends end up separately working through the ranks of the opposing faction, eventually emerging as their leaders. It’s a compelling take on the “brothers fighting brothers” archetype, a theme which isn’t explored nearly enough in video game literature. 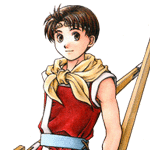 The protagonist of Suikoden II. He lives in Kyaro with his step-sister Nanami. His name is Tao in the manga. 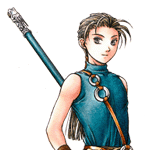 Riou’s closest friend. Unlike Riou and Nanami, he comes from the wealthy Atreides family in Kyaro. 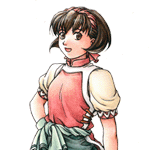 She is Riou’s older step-sister. She has a tomboyish nature and is not a proficient cook. Even so, she gets along with Jowy and Riou. 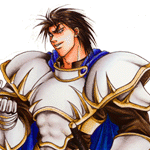 The insane prince responsible for breaking the ceasefire between the two kingdoms. He does this in order to conquer the enemy territory for his own twisted gain. He refers to anyone weaker than him as “PIIIIGGGGGGGGGGSSS!!!!” 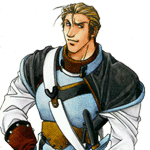 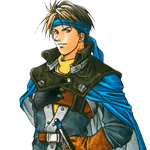 One of the returning characters from the first Suikoden. Even though he still lingers about his struggles back in Scarlet Moon Empire, he can assess the situation without becoming too emotional. 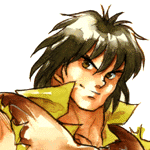 Another returning character from the first Suikoden. He moved back to Jowston and runs a mercenary fort with Flik. He retains his easy-going personality, although his reputation as The Bear has become more apparant. 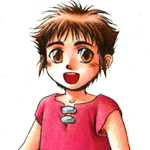 She’s the young girl that resides in Toto, and considers Jowy as her big brother. 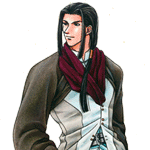 He is the main strategist in Suikoden II. He learned his tactician skills from his mentor, Mathiu Silverberg. However, he was expelled due to his selfish ambitions. After his expulsion, he used his knowledge to become a trader. 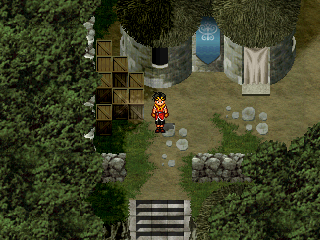 Suikoden II takes everything that was established in the first installment and refines the formula. The graphics are much clearer, with intricate detail on the sprite animation. Furthermore, the interface is streamlined, and you don’t have to jumble around the menu in order to equip an item. Also, you now have the option to move plot characters into the convoy slot. This means that the mandatory characters do not have to participate in battle. Next, you can now switch positions from the front row to the back. It’s very convenient for some who want to bring more than three short-ranged fighters into battle. Aside from the visual improvements, the Regular and Duel battles remain the same. Later on, you partake in a multi-part standard battle against Luca Blight. Your army takes them on together, six at a time, as fallen members are replaced with reserves. It’s easily one of the most compelling battles in the entire series, and it would have been worthy of endgame material, but it’s actually just about halfway through the game.

The Army battles have gone in an entirely different direction. Rather than the rock-paper-scissors style fights in the first game, they take place on a grid-line battlefield, and play similarly to a strategy RPG. You have the option to attack, use your Rune, or execute a special attack. Depending on the attacker’s and the defender’s stats, you either successfully hit your opponent or miss. If you manage to hit your opponent twice, consider them done. The objectives vary a bit – you either have to hold out your fort for a number of turns or seize the enemy camp. It requires a bit of thinking as well as a portion of luck. 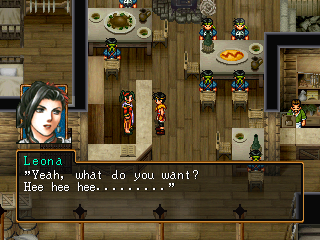 Like any well-told war tale, Suikoden II is far more than a story of good versus bad, and humanizes the faces behind the destruction. There are certainly evil characters, the most prominent being Luca Blight, but even he is just a small cog in the enemy forces. One of the most crushing moments occurs when you lead a critical assault on your old friend’s empire – the viewpoint cuts to Jowy, bidding his wife to escape and start a new life, hoping that she finds safety from your brutal onslaught. The best ending – provided you manage to find all of the hidden characters – is one of the most appropriately touching finales in all of video gaming. It’s moments like these that mark this entry as not only one of the best series, but one of the standout RPGs of the 32-bit era.

Suikoden II is brilliant, but unfortunately the English localization suffers from notable flaws. For starters, it’s pretty obvious that the translation was rushed. For example, you’ll see inconsistent naming conventions throughout the game, such as “Jowy” appearing as “Joei”. Also, the dialogue has numerous grammatical errors. It even goes as far as unfinished text from several NPCs, as well as several bugs. For example, you can visit later areas by pushing a door. This will allow you to get stronger, and recruit characters at a much earlier time. Sometimes, the music goes silent when you engage the army battle or when an important NPC sings. Despite of the rushed translation and the notable glitches, the game is playable from start to finish. If you have a European copy, every problem from the North American version is fixed. 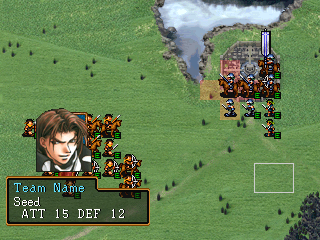 Together with its predecessor, Suikoden II appeared on the PSP as Genso Suikoden I & II. It has the same enhancements as Suikoden I, except the exploitable glitches are fixed. Unfortunately, the PSP version didn’t see an overseas release. It was also ported to Windows platforms in Asian territories. Suikoden II was largely overlooked in the USA and Europe at the time of its release, as it was published roughly at the same time as Final Fantasy VIII. Still, it won numerous awards and gained extremely positive word of mouth, which only increased its fandom over time. As a result, the demand for the English version of Suikoden II has ramped up significantly, and often fetches prices in excess of $100 on the secondary marketplace. However, as of December 2014, Suikoden II was released on the NA PSN, followed by a European release in January of 2015, making it more easily available.