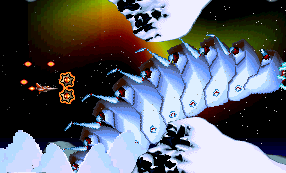 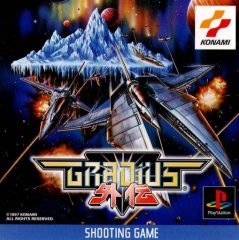 Gradius Gaiden is the perfect example of how to evolve a series. Graphically, it does to Gradius what Symphony of the Night did for Castlevania. It features gorgeous, splendidly detailed 2D graphics that totally blow away most other shooters, with improved color depth, transparency effects, and rotating and scaling sprites, with barely a polygon in sight. 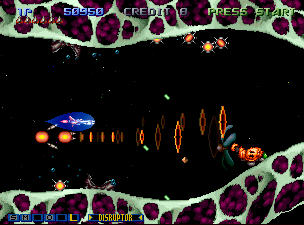 The tone is set by the first stage, a snow filled area called “Beyond the White Storm”. It’s a beautiful trip through a snow field as colorful auroras shine peacefully in the background. The whole thing is interrupted by a gigantic white caterpillar which bursts out of the ground and begins to attack.

Gradius Gaiden really excels because it has lots of familiar moments with cool twists. The second stage is a ship graveyard filled with wrecked remains of old Gradius bosses, some of which still fire off some shots despite being buried deep in rubble. The third stage is another crystal level, but here, the crystals bend and refract your laser shots, which looks really, really cool. The statues in the Moai stage fire huge lasers, which continue to radiate even after being destroyed. The level boss is a square room with four huge Moai heads on the wall that spin around, which brings to mind that famous level in Super Castlevania IV, where the entire screen rotates. (The Moais even taunt you with voice clips, yelling “You think you can beat me with that? Loser!” when you first fight them.) 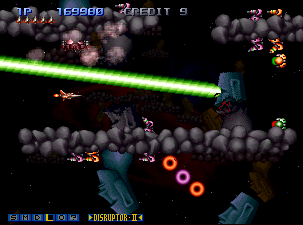 The biological and plant stages are cool, but the real standout is the “Event Horizon” stage. It’s a replica of the first level from the original Gradius, except it’s being torn apart by a black hole, requiring that you dodge bits of scenery that are being tossed at you. The game climaxes with the usual boss rush – one of the toughest parts of the game, of course – as well as a speed up zone, a bipedal robot with rocket powered skates, and a final boss that puts on an impressive light show while cycling through images of bosses from Gradius’ past.

The music, again like Symphony of the Night, consists of a wide selection of genres, ranging from peppy new age to upbeat rock to cool atmospheric tunes. The boss theme has an unnaturally catchy rhythm, and is far more memorable than the repetitive tunes in most of the other games. The Moai stage has an exotic instrument that sounds a bit like a bagpipe, while the final fight has an epic, faux-orchestral quality to it. It’s definitely classic Konami, top caliber stuff that feels considerably more evolved than previous entries. There’s even the option to switch between male and female voiceovers. This also affects the intro, which is done in English with a Star Wars-style text scroll. 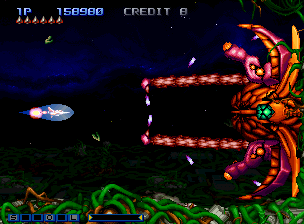 Unfortunately, the weapon selection isn’t quite as vast as in Gradius III, although it’s still fairly expansive. This time, you can select from four ships. The good old Vic Viper features the standard Gradius payload with the usual Missile, Double, and Laser weapons. The Lord British – making a triumphant return from Salamander – has a Two-Way Missile, a Ripple Laser, and a new laser beam called the Disruptor, which emanates a thick, solid pulse across the whole screen.

A new ship called the Jade Knight has the Spread Bomb, the Round Laser – which fires a circular laser that surrounds your ship – and the Pulse Laser, which is basically the same as the Twin Laser. The other new ship, the Falchion Beta, is based off the spacecraft from the Famicom Disk System game Falsion. It has the Rolling Missile – a bomb that fires straight down and then explodes horizontally – and Auto Aiming, a multidirectional shot that will automatically target foes, and a Gravity Bullet, which is a very powerful shot that explodes like a Spread Bomb. 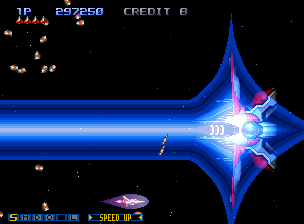 The weapons are not interchangeable between ships, but you can switch between ships when you continue. You can also configure the order of the power-ups on the weapons bar. That means you can stick the Shield at the front, and the less immediately useful weapons at the end, so it’s easier to arm yourself with only a few orbs.

There are also two levels to each weapon, including bombs, allowing them to be strengthened for extra firepower. There are also four Shield selections. In addition to the standard frontal Shield and Force Field, there’s the Guard Shield, which protects the top and bottom part of your ship but leaves the front and back exposed, and the Limit Shield, which grants a few seconds of total invincibility. Too bad the cool Option modes from Gradius III were removed. 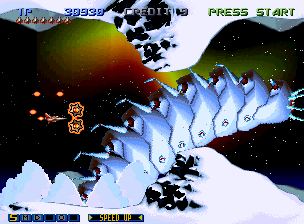 The lessened arsenal is an extraordinarily minor flaw though, because the overall quality definitely makes up for it. Gradius Gaiden is the first title in the series since the MSX games made specifically for the console market. As such, it’s balanced to be difficult but not impossible. You begin the game with nine credits, and can give yourself up to seven lives, but the game is still challenging even on Very Easy mode. Harkening back to Salamander, there’s also a two player simultaneous mode. When playing with a friend, you’ll instantly respawn upon death, making the game a bit easier. However, you need to share the credits between both players, and they can go quickly. The single player mode still works as usual with checkpoints.

Gradius Gaiden is a fantastic game – it’s really a toss-up between this and Gradius V as to which is the best. During its original run for the PlayStation, Gradius Gaiden was only released in Japan. It was meant to be included as a bonus on the American release of the Salamander Deluxe Pack, but the localization was canceled. 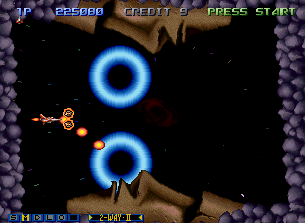 Gradius Gaiden made its American debut on the Gradius Collection for the PSP in 2006. It’s pretty much a straight port, although it lacks the two player mode. Unfortunately, when playing the PS1 disc on a PlayStation 2, there’s some severe slowdown in the “Event Horizon” level, though it’s still playable.