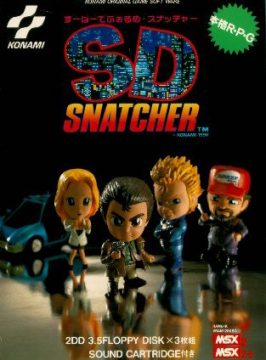 The original PC release of Snatcher ended on a horrible cliffhanger, undoubtedly frustrating many gamers at the time. And yet, instead of continuing the storyline and making a sequel, Kojima decided the reboot the plot in the form of SD (Super Deformed) Snatcher, a cutesy RPG. Even back then, the man was full of surprises. 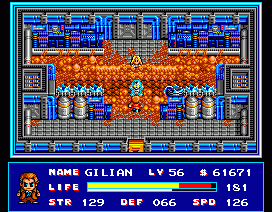 The intro starts off mostly the same, as Gillian enrolls in JUNKER to hunt down Snatchers and learn about his past in the process. It hits a lot of the same major plot points of the original game – the death of Jean Jack Gibson, visiting Outer Heaven, meeting Napoleon, discovering the Queen Laboratory – but it’s all done with substantial twists. You actually team up with Gibson for the first mission – it’s only when you get separated that he meets with his untimely death. When you’re following up on leads, you need to discover the identity of Napoleon, who apparently works in the movies. You need to run a small fetch quest to buy a movie ticket and some 3D glasses, then attend the movie theater, to learn his identity. 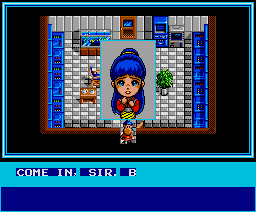 But other than key moments of the story, SD Snatcher greatly changes up the locations and events. There’s a huge plot thread devoted to a cult that worships Snatchers, during which Gillian is framed for killing a human and kicked out of JUNKER. Furthermore, the Snatcher’s secret laboratory is actually hidden underneath an amusement park. You need to track a Snatcher with a balloon on its head, making your way through various exhibits and fighting other Snatchers in silly costumes. The most important element is that it actually finishes off the story this time. For the most part, it’s pretty similar to how the events played out in Act 3 found in the later CD-ROM versions of the original game, but there are plenty of details that are different.

Certain characters play different or expanded roles. Harry still gives you Metal Gear (here a tiny, handled version called Metal Gear Petit) and also acts as a store to sell weapons and ammo. Jamie also works for JUNKER as a medic, acting as the game’s hospital. Random plays a much larger role in the story, as Gillian meets up with him several times over the course of the game.

Of course, the basic framework has been completely changed from a visual novel to a Japanese RPG. The graphic style is similar to Falcom’s early Legend of Heroes games, with tiny sprites moving rather choppily around the screen. However, SD Snatcher avoids many of the standard tropes, primarily by eliminating random battles. All of the enemies are plainly visible on the field, although given their erratic movements and the narrow passages, it’s usually pretty hard to avoid combat.

When attacking an enemy, you enter a first-person combat mode. All of the enemies are robotic, usually variations on the Insector robots found in the original game. You can aim at different parts of the robot, thereby disabling various functions – take out the feet (or wheels) and its agility drops, or destroy its weapon to reduce is strength. Alternatively, you can just hammer away at its weak point for a potentially quicker victory. There are a dozen types of guns (of which you can carry three at once), each with different abilities and targetting ranges, in addition to special weapons like grenades and rocket launchers. Each weapon has limited ammunition, which can be bought either at Junker HQ from Harry, or obtained at any of the Joy Division stores found throughout. Sometimes you can find spare ammo during the dungeon crawls, but it’s very possible to end up in a situation where you’re complete unarmed, if you’re not careful. Occasionally you fight battles where an enemy takes a hostage, and accidentally shooting an innocent will result in an instant Game Over.

It’s an extremely innovative battle system, especially for 1989, and there hasn’t been any game that’s used anything quite like it. But in spite of its freshness, it still quickly grows tedious, especially since you only control a single character in combat, and rarely fight more than a single enemy at once. There’s an auto-battle feature, where Metal Gear takes over the fighting for you, but it still feels like a slog at points. It doesn’t help that the game is quite unbalanced and even a bit buggy, and there are often multiple dungeons right after another with little plot exposition. 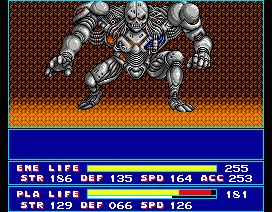 While the field graphics are alright, the mechanical designs of the enemies really stands out, as there’s a bunch of extremely cool robotic baddies to destroy. When you fight against Snatchers, their skin and muscles are slowly carved away, revealing the metal skeleton beneath. Much of the game’s humor comes from the extreme violence contrasted with the silly looking characters and otherwise light-hearted demeanor.

Like the original Snatcher, SD Snatcher was shipped on floppy disks, as well as an SCC cartridge for improved sound. Other than a few themes, most of the soundtrack is all new and the style is a bit more upbeat. Overall the music isn’t particularly notable, but there are a few standout themes, particularly the intro theme, Difficult Move and the ending theme, Coda, both of which were featured on the Snatcher Battle rock soundtrack CD. 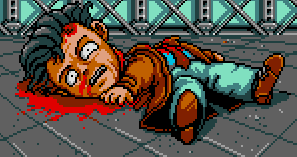 SD Snatcher is definitely a product of its time, and it hasn’t aged quite as nicely as Snatcher. Still, any fan owes it to play it themselves, just to see some of the storyline differences, even the more subtle ones.

Unlike the original Snatcher, SD Snatcher was only released for the MSX2, and only in Japan. In 1993, Dutch hacker group Oasis translated the game into English, making it one of the first documentated cases of fan translations. The English isn’t great – they even admitted they had to cut out a good chunk of the text to get it to fit – but it’s easy to get the gist of everything.