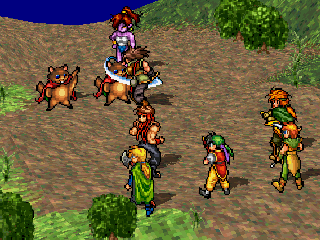 Before Final Fantasy VII introduced the JRPG to the Western mainstream, Suikoden was Konami’s flagship RPG. Released in 1995 in Japan and 1996 in North America and Europe, the series is loosely based on the Chinese novel Shui Hu Zhuan (Water Margin). They appear to be fairly typical games, set in a standard fantasy universe vaguely inspired by both medieval Europe and Asia, but there’s substantially more depth beyond the surface.

The stories focus on the tragedies of war, not a particularly distinguishing aspect amongst video game plots – many tactical RPGs, like Nintendo’s Fire Emblem and Quest’s Tactics Ogre, feature similar tales of political intrigue and backstabbing, evil empires and scrappy rebellions. Suikoden, however, is usually ahead of the curve, giving a more personal take on the people behind the fighting. The series’ main appeal is the ability to recruit up to 108 characters; each with their own style, personality, and role. Not all of them are fighters – some simply exist to be drafted into your hero’s burgeoning castle, allowing you to assemble a loyal community from the ground up. Some act as merchants, some trigger minigames like gambling or cooking tournaments, and even theatrical plays. Over the course of the game, your castle goes from a barren lot to a flourishing fortress. The characters you gather fulfill a number of diverse archetypes, including hot-blooded swordsmen, rugged ruffians, wispy bishounens, and anthropomorphic animals. 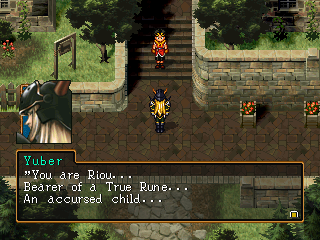 In each installment, your army inhabits a fortress – although it is usually a castle, some games also stick you in a tower or a ship. All of these are surrounded by a body of water – after all, this is inspired by the Water Margin story. The more people you recruit, the larger your army will grow. Consequently your fortress will slowly come to life. It is a little bit like a collect-a-thon, and you’re handsomely rewarded in the end if you gather all 108 characters before a certain point. While each Suikoden title takes place at a different time period in the series’ history, sometimes the characters overlap between games. However, the main story usually features a new protagonist.

Suikoden avoids the usual JRPG tropes by approaching storytelling with far more maturity than the average JRPG. Unlike other JRPGs, which let the players explore the entire planet, each installment focuses on a particular region. In every area, you explore places that have parallels to real world civilizations. Another recurring theme is that a character you recruited may come from a distant land to fight on your behalf. Depending on their character backstory, it may reference an unfamiliar territory. If you are lucky, you might find yourself visiting that region and learn more about it in the next installment.

Another recurring theme in the mainline series involves the power of the 27 True Runes. The Runes are immeasurable powers that govern the world, and provide the source of all magic. Because of their potent abilities, many of the major wars are often influenced by the Runes themselves. Throughout the mainline series, you often see the protagonist struggling to find inner peace, and the power they wield will harbor deep consequences on those around them. As of today, only 18 of the 27 true runes are ever mentioned directly. 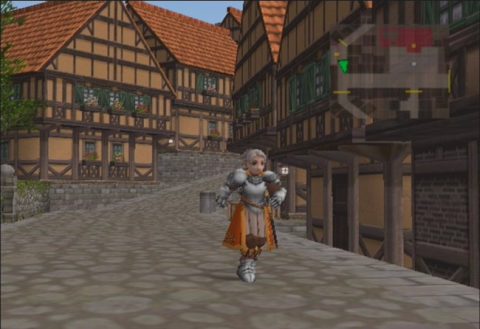 Regular battles are fairly typical turn based JRPG fights. In combat, you’ll fight enemies with as many as four to six people. With your entire party carrying out their actions, most of your allies will engage in battle quickly. If you bring certain people to the party, you may enable a so-called unite command. Similar in execution to Chrono Trigger‘s combined attacks, you can have as few as two or as many as six people executing a powerful attack. These are not without consequences, though, and tend to have debilitating after-effects. Also, if things tend to get really ugly, you can bribe your opponents with money to escape from battle.

The second combat style is the army campaign. These are wide-scale battles where you lead a large coalition against the opposing side, and are essentially simplified strategy RPG segments. This type of battle usually occurs during a pivotal part of the story. Also, this is where gathering a lot of people usually comes into play. Every character, including the ones that aren’t normally used in regular combat, will have a role in the army battle. This is also the place where you might lose your allies in battle if you make the wrong decisions. If one of your allies is killed, they’re gone for good. Consequently, you’re immediately locked out on getting the best ending. Each title in the mainline series has its own distinct style for the army battles. However, they all share a primary objective – vanquish the opposing group.

Finally, the third style is duel battle. This is where the protagonist engages on a one-on-one fight against a major opponent. The Duel battle plays like rock-paper-scissors with health bars. Each of the given commands has an advantage and a disadvantage. For example, attack beats Defend, Defend beats Desperate Attack, and Desperate Attack beats Attack. In order to duel effectively, you must predict what your opponent will use in battle, which is based on their expression and tone of the dialogue. For example, if your opponent’s dialogue description looks like he’s about to go all out, you defend. This will evade his desperate attack and you’ll punish him with your own attack. The duel will continue until someone’s HP is depleted. Most of the mainline Suikoden games follow this format, although there are minor deviations on each installment. 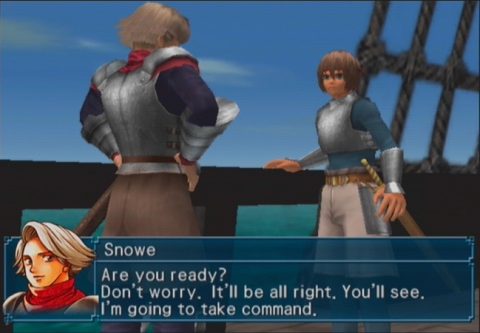 The spin-off Suikoden games have different styles of gameplay, and their story reveals additional insight to an already expansive world. Most Suikoden games are known to be relatively easy. With so many characters at your disposal, as well as their overpowering attacks, you are practically a killing machine. It’s so easy that you can switch to auto-battle in most battles without worrying. Probably the only challenge you will get is finding the 108 Stars of Destiny. The series is notorious for missable characters. You may want to refer to a guide to find all of them.

Lastly, the protagonist’s name is chosen by the player, so sometimes they are referred to as the “Hero”. However, they do all have official names based off various publications. Sometimes, there are multiple names in different sources – these are mentioned, although they are titled based on the most used name amongst the fan community.

Links:
Due Fiumi The most comprehensive of Suikoden info you can ever find. Check out their Gensopedia section. (Archived in the Wayback Machine)
Suikosource Another Suikoden fansite that has robust info on Suikoden.
Suikox A message board for the Suikoden fans.

Throughout of the main Suikoden games, there are well over five hundred characters. Covering them all would be a book in and of itself – however, there are a number of important recurring characters that help gives the series its identity. Here are some of the most interesting. 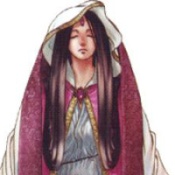 One of the few characters found in all of the five mainline Suikoden games. She’s a blind sorceress and the “Keeper of the Balance”, giving advice and guiding the players. She possesses part of the Gate Rune, one of the 27 True Runes, which accounts for her immortality.

Viki is a bit of scatterbrain. She appears in all five mainline Suikoden games and uses her rune to transport you to locations you’ve already visited. Due to the fact that she’s the same age in every game, it seems to imply that she can also travel through time as well as space. In Suikoden III, she teams up with a younger version of herself, who seems to be infinitely more mature. She becomes playable in Suikoden II and has been usable in battle in every game since.

This mysterious woman appears in all five Suikoden games, as well as Suikogaiden and Suikoden Tactics. Through each installment, she appears to be the same age, and tends to wear even more revealing outfits, if that’s possible. She mostly takes on the role of selling and equipping runes. Although she plays a passive role in the first three games, she finally becomes active in battle in the fourth and fifth games. Her past is mysterious, and no one is clear as to why she hasn’t aged.

Little is known about Yuber, except that he’s some kind of evil demon that interferes with the lives of mortals. He pops in and out of the first two Suikoden games, but dons a snazzy blue suit/hat combo in the third game, and teams up with the Masked Bishop and Sarah to wreck some havoc.

Another strange demon with only a bit of implied backstory, Pesmerga seems to exist solely to hunt down and destroy Yuber. He joins your party in Suikoden I & II, but is sadly absent from the third. Many fans hoped that the conflict between the two would continue in succeeding games, but this particular thread seems to have been dropped.