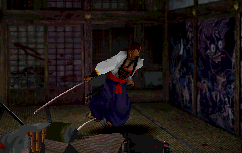 Like many game concepts, Soul of the Samurai‘s results from the mixing of ideas popular at the time of its creation. Tenchu and Bushido Blade had shown the potential of a more serious take on sword fighting and feudal Japan, while the breakout success of Capcom’s Resident Evil series led to a wave of horror titles from its competitors. And so, right around the time Konami’s Tokyo studio was working on Silent Hill, its recently-established Sapporo branch was busy incorporating these disparate influences into a new formula. 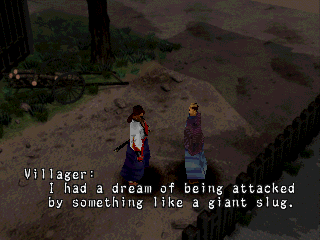 Soul of the Samurai is an action-adventure title in which you use bladed weapons to fight zombies and monsters within pre-rendered renditions of feudal Japan. If that reads familiar to modern eyes, it’s because on the very month of Soul‘s Japanese release, April 1999, Capcom announced Onimusha, a much more famous game which fits the same description. This is how video games progress; any fresh idea becomes fair game for other developers to recycle and expand upon.

The game is divided into chapters taking place in an unnamed town and its surroundings, usually allowing you to travel freely between its areas. As is often the case, the pre-rendered backgrounds can be confusing to navigate as the viewpoint changes suddenly upon entering a new screen, but at least they aren’t too constraining. There are no shops, but the village square has NPCs you’ll be talking to on occasion, and there’s the occasional basic puzzle, usually revolving around finding keys or unlocking doors in some other way. At its core, though, it’s still an action game, as reflected in its rather short length: it shouldn’t take more than 3 or 4 hours to beat. It’s also not especially concerned with scaring you; the horror elements are mostly there to add flavor. One of the highlights is a chapter where you have to face unending waves of sword-wielding zombies as they flood the town square; the continuous, large-scale carnage that results almost seems to prefigure Koei’s own unending Warriors series. 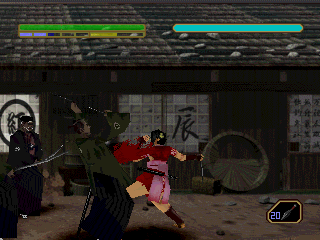 The story begins as a wandering ronin, Kotaro Hiba, returns home to visit his parents’ grave. As he walks past the town gate, he witnesses local samurai attacking a teenage girl and rushes to her help. She is Lin, a skilled ninja, and hardly needed it. They exchange a few clumsy words and part ways. This sets the pattern for their subsequent meetings, as Lin demands to be treated as an adult while Kotaro repeatedly puts his foot in his mouth.

At that point, you get to choose your character. Though their stories are connected, the paths each follows through the game is mostly unique. In order to access the final boss, you will need to complete both. 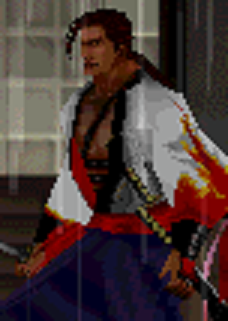 Following his encounter with Lin, Kotaro drops in on his old friend Yukinosuke at the local dojo; they grew up together, training under the same teacher. This is demonstrated in a flashback sequence cleverly doubling as a loose tutorial. Kotaro is worried by the behavior of the castle men he fought earlier; their eyes didn’t even seem human. They, as he puts it, “felt wrong even through the blade”. His friend doesn’t want him to visit the local temple, where the graveyard is located, but won’t say why. Kotaro assures him he’ll be back to drink sake with him as soon as he’s done. He won’t be. On his way out, he bumps into Ryu Oda, a military scholar with ties to the local daimyo, Lord Tohjo. Oda wants to recruit him to work for his lord, but he won’t have it. Unlike most ronin, he is masterless by choice. From then on, he will become irremediably involved in the plot taking place in the fief.

Initially, you might find his attacks sluggish and his movements a bit awkward. Soul doesn’t use tank controls, but characters are slow to turn. Despite this, his swordplay is the game’s main appeal. There’s no point in mashing buttons blindly, as timing and precision are required to fight efficiently. A few different moves can be performed by combining directions with the attack button: you may pull a 180 and slash at someone approaching from behind, slash horizontally at two enemies at once, lunge at a more distant opponent with a piercing stab or perform your standard 3-hit combo to finish off a lone opponent. There’s something for every situation, and in a tight spot, you’ve got a few special moves, too. Those are earned through a basic experience system and cost magic points to use, which refill as you fight. You may also sidestep, backdash or even jump to escape attacks. 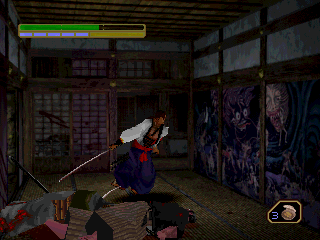 A lot of Kotaro’s strength lies in parries and counterattacks, so it’s possible to adopt a very defensive style. Blocking an enemy attack usually creates an opportunity to attack in turn, but you must be wary of other enemies sneaking towards you in the meantime. You can simply hold the block button, which also serves to lock you onto the nearest enemy, but by pressing it followed by the attack button at just the right moment you can perform a deadly counterattack which kills most normal opponents instantly and deals heavy damage to bosses. You can also trip an opponent’s sword by attacking right as its attack’s about to land, leaving them open for a moment. And should you tire of fighting, you can always put your weapon away and run past enemies, survival horror style.

Soul of the Samurai understands that swords are deadly weapons, so that every hit deals significant damage. This also means that you can die surprisingly quickly if you lose focus, though the game isn’t extraordinarily hard. Healing items are found in limited numbers if you stick to the main route, but there’s a lot of extra loot to be found in places the story doesn’t currently need you to be.

Kotaro also finds and receives new weapons quite often, varying in power, speed and reach. Some of them completely change the way he fights, such as a sword that can only be used for quick-draw attacks or the twin swords you obtain from the legendary Miyamoto Musashi, who appears as a hidden boss. In general, boss battles aren’t the game’s strongest point, but one-on-one sword duels such as the one he challenges you to are a bit more interesting as they test your mastery of the game’s core mechanics rather than reverting to generic action like some of the more pattern-bound bosses. 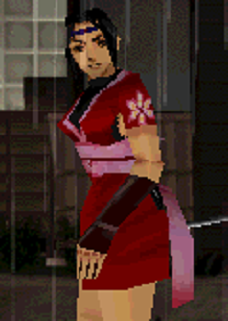 Lin, meanwhile, is searching for her brother. The two belong to a ninja clan serving the Shogunate; he was tasked with retrieving a large shipment of gold that went missing in the seas around Lord Tohjo’s fiefdom and hasn’t been heard from since. When three more ninjas were sent in, she followed them of her own initiative. Her big brother has been her protector since their parents died, and she cannot imagine life without him.

Lin’s side has a different feel. She’s overpowered, with a 5-hit combo that’s usually enough to kill everything on screen and the ability to throw shuriken and explosives. This makes her battles mindless, so that her story feels like an Easy Mode or a more typical hack-n-slash. The lost sibling bit leads to some predictably boring drama, though at least those scenes don’t drag too much.

Her quest does have its highlights, like when she fights her way to the enemy’s castle from rooftop to rooftop as Kotaro barges in through the front entrance below, or a side-quest where she needs to find messages from the three ninjas that preceded her in order to locate a legendary weapon. You’ll hardly need it, but it adds a bit of depth to the adventure regardless. 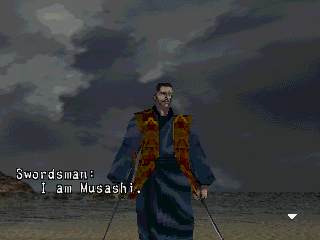 Once you’ve finished both stories, you get to choose which character to fight the final boss with, with the second serving as backup in case you fail.

As is common in games with a similar setting, the music mixes modern styles and traditional Japanese instruments. It’s generally pretty good, but there aren’t many tunes that really stick in your memory. The models are good enough for the PS1, being a late release, and though using pre-rendered images for backgrounds has its drawbacks, they do hold up pretty well visually. Most impressive are the motion capture animations, once again courtesy of the Japan Action Club, who help the swordplay look legit.

In early development, Soul was simply known as “Japan”. In keeping with that theme, save files are registered as Haiku poems related to the current situation rather than showing the time spent playing or the name of your current location. For example, a save at the beginning of Kotaro’s Chapter 3 reads:

This is just as you’re about to enter a cavern where bodies dug up from the local graveyard have been taken. As minor a detail as it is, it’s certainly a nice touch.

The credits suggest that someone was hired just to translate those, and he did a good job; it’s odd, then, that the dialogues are all pretty awkward, though at least they’re still perfectly understandable. None of them are voiced, a blessing given the quality standards for video game dubs at the time. 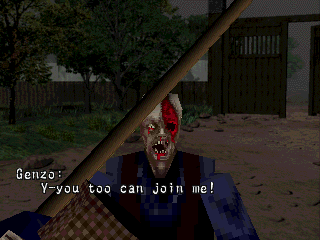 Despite being released in all three major markets by a major publisher, Soul of the Samurai came and went discretely, as if destined from the start to pop up on “hidden gems” lists 10 or 15 years down the line. It’s disconcerting to see how many reviewers of the day seemed confused or unreceptive to its very nature, whether it was Gamespot complaining that it isn’t a “a ninja game of Tenchu’s caliber”, or IGN’s “I have to remind myself that this isn’t tactical espionage” (an unwarranted comparison to Konami’s own Metal Gear Solid). There is certainly something there, and it would have been interesting to see what might have been done with it had it turned into a long-running series rather than (or along with) Onimusha.