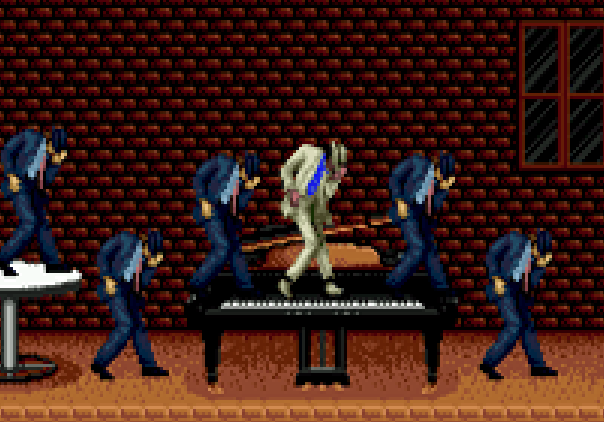 Ah, the 80s. We constantly look back on the era and its charming tackiness, its pointless, embarrassing, yet adorable fads, and its inane sense of materialism. Spearheading this movement was the King of Pop, Michael Jackson. His reputation faltered over the years, but no one can deny that he was one of the greatest entertainers to ever walk this earth. By the late 80s, Jackson had been integrated into every form of entertainment. One of his biggest projects was Moonwalker, a 90 minute movie which was essentially several music videos connected through a very loose plot. 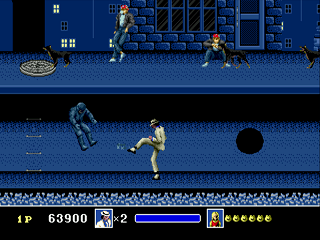 The story involves a confrontation between Michael and mobster Mr. Big (played by Joe Pesci), who has kidnapped a bunch of children. It coincided with the release of Michael’s new hit song, “Smooth Criminal”, which it also revolved around in terms of its plot, with Michael being some sort of “good” gangster. As part of a multi-faceted marketing ploy, there were also a number of video games based on Moonwalker. 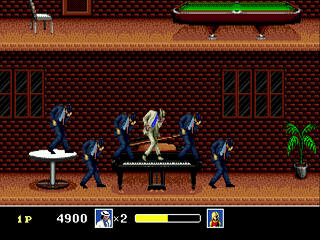 The movie still baffles people today. Joe Pesci really hams it up as an insane drug dealer, there are lots of spiders for some reason, and at one point, Michael Jackson turns into a car. It’s either a terrible, contrived mess, or the greatest thing the human race has ever created. The games are a different story. There are three versions, one for the Genesis and Master System, one for arcades (all developed by Sega), and one for the home computers of the time. The Sega ones are, of course, the best. In particular, the Genesis game was developed by AM7, which would one day become Overworks, developers of Shinobi, Streets of Rage, and Skies of Arcadia. The game was directed by Roppyaku Tsurumi, who later worked on Spider-Man: The Videogame, and Astal (for the Saturn). The game concept, however, is attributed to Jackson himself. 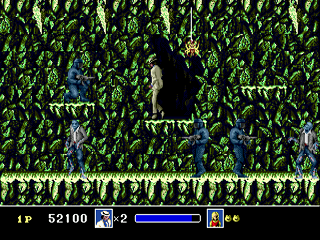 In the Genesis version, you, take the role of Michael as he travels through a corrupt city rescuing children. Although his adversaries – crooks, mobsters, gang bangers, and thugs – pack all kinds of heat, Michael chooses to face his enemies with a far greater force: the power of dance. That’s right, Michael’s sheer ability to dance is enough to topple almost any foe, and the magic of his rhythm is more than enough to conquer the hordes he faces. 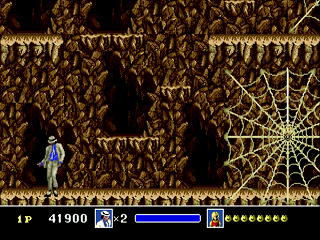 Moonwalker is a quintessential 16-bit action-platformer. You travel through side-scrolling stages, looking inside doors, dumpsters, and car trunks looking for the captured girls, although you may also find bombs. Levels include a nightclub (from the “Smooth Criminal” portion of the movie), some dark streets, then a zombie-filled forest, a cavern, and of course, Mr. Big’s hideout. Each stage requires a bit of exploration to find everyone, but once you do, Bubbles the Chimp flies out, sits on your shoulder, and points the path to the area boss. 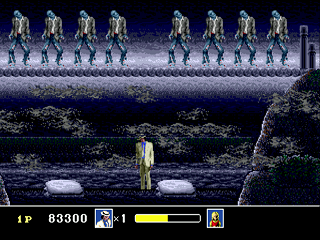 Jackson has an arsenal of tricks up his sleeve in his quest to combat the ever-prevalent thugs. Pressing the attack button makes Michael perform a single dance move. Each move he performs throws out some “dance magic” (i.e. sparkles), which blows his enemies away as if they were made of paper. Michael can also do various other stylish techniques in certain situations, like sliding down banisters and other slanted rails, moonwalking along precarious surfaces, and dodging enemy fire by spinning.
Michael has a single meter that indicates both his health and his special power. Pressing the dance button makes him spin. Just lightly tapping it doesn’t use up any power, but you need to have a really skilled trigger finger to tap the button lightly enough. Depressing the button for too long makes Michael lose power. Press it longer and he throws his hat once he’s done spinning, which instantly destroys anything in its path. 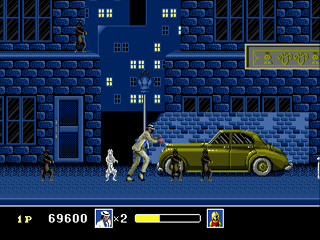 Last but not least is Michael’s greatest power. Hold down the dance button long enough and the enemies will suddenly cease their aimless meandering and gather around Jackson. That’s when it happens – a beautifully choreographed and synchronized dance number starts, at the end of which, the multitude of surrounding opponents instantly die. The enemies are more than happy to give their lives for a moment to dance with the King of Pop, with even the dogs incapable of resisting the call to dance.
All the spinning and dancing you do exhausts Michael’s health meter pretty quickly, but the game is built around this aspect. Every little girl you find restores your health, and each stage has a quite a few of them. You can play the game safely and not use any powers, or you can have fun with it and constantly teeter on the edge of death, but get your health restored every few seconds.

When you gain a certain number of points, a shooting star flies across the screen. If you manage to catch it, Michael will turn into a giant robot. This is very hard to do, though, as the star can be fairly unpredictable, and unless you constantly monitor your score, you won’t be able to anticipate its arrival.

Things get even weirder in the last stage, when Michael boards a spaceship in order to have his final showdown with Mr. Big, who also inexplicably has a spaceship. This battle is done from a cockpit perspective, with an overly complicated HUD. It’s so off the wall that it’s unforgettable. 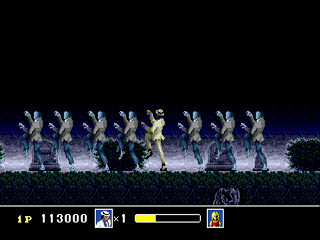 For all of its kitschy charm, though, the most awesome aspect of Moonwalker is its music, with most of Jackson’s greatest hits from the 80s played during each stage. Aside from “Smooth Criminal”, which is the game’s centerpiece, you have “Billie Jean”, “Another Part of Me”, “Bad”, and of course, “Beat It”. The initial release included “Thriller”, used in the dance attack for certain stages, but perhaps because Sega didn’t obtain permission from the songwriter (it wasn’t penned by Jackson), it was removed from subsequent printings. Despite the fact that the music is generated using the Genesis sound chip and without vocals, it’s still just as awesome as the real thing.
Moonwalker looks amazing if you consider the fact that it came out on a home console in 1990, besting even Revenge of the Shinobi. Michael’s sprite is great, and shows incredible animation without any rotoscoping. 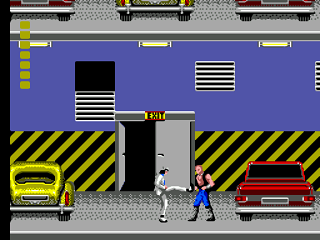 The Master System version of Moonwalker, like most SMS ports, is essentially a dumbed-down version of the Genesis game. Most of the cooler aspects have been removed, such as the sparkles when Michael attacks, and the awesome dance scenes have been brutally scaled down. Plus, the SMS’s inferior sound capabilities hurt the greatest aspect of the game, that being its music. It’s still not a bad game, but there’s no real point in playing it with the Genesis version out there. 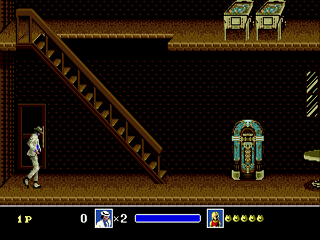 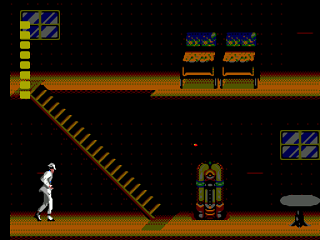