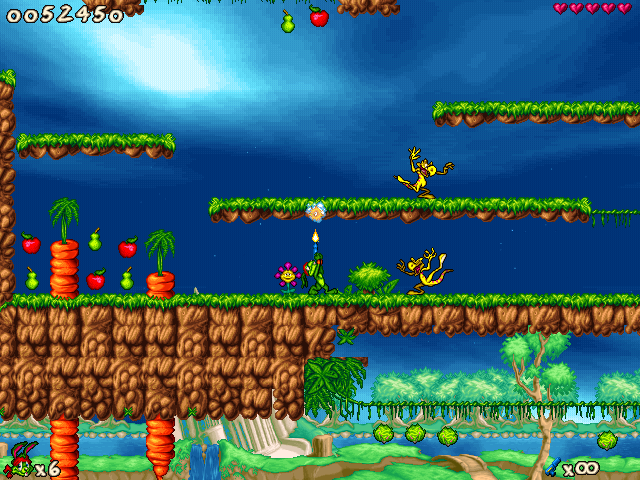 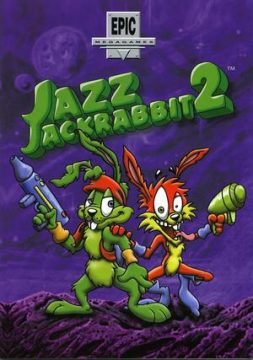 Some time after the original Jazz Jackrabbit, Jazz and the princess are set to be married. Suddenly, Devan Shell appears and steals Jazz’s giant wedding ring to power a time machine (how very Day of the Tentacle), where he plans to conquer the universe before Jazz is even born. The queen declares Jazz a fraud and throws him in the dungeon, where his slightly psychotic brother Spaz rescues him.

The only time the story actually shows up at any point is the manual, though, so none of this matters very much. The game starts off with a nicely animated intro FMV, which is basically what the opening would be if Jazz actually had a cartoon. While the original game was definitely inspired by stuff like Bugs Bunny, the sequel has much more of a Saturday morning cartoon vibe, which fits perfectly, considering the character. 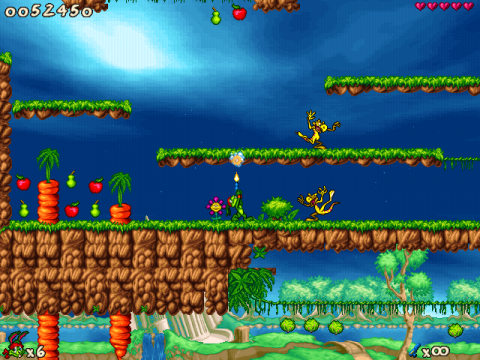 Gameplay-wise, there’s been a lot of changes since the original Jazz Jackrabbit, and pretty much all of them are for the better. Running has been mapped to a separate button, so you’re not constantly dashing around into everything at full speed. You can also now actually aim upwards, so that you don’t have to kill enemies above you by jumping up and down and mashing fire. And in platformer tradition, you now have a downward stomp for crushing enemies and certain blocks below you.

The other big major change to the sequel is that you can pick from two characters: Jazz or his demented brother Spaz. They both have the same weapons and they both go through the same levels, but they each have a couple of unique special moves. Jazz can glide through the air with his ears by mashing the jump button, while Spaz gets a double jump. By pressing down and jump, Jazz will jump into the air with his fist upraised, destroying blocks and enemies above him. Spaz will do a flying kick with the same input, which destroys enemies and certain blocks horizontal to him.

Sadly, however, the level design doesn’t really work with this idea as much as it should. One characters will be able to get to some power-ups and hidden areas the other can’t, but there aren’t any places where Jazz’s and Spaz’s route will actually differ. The fact that both characters get the same ending and are mostly identical except for their special moves makes it more of a matter of preference than anything else. 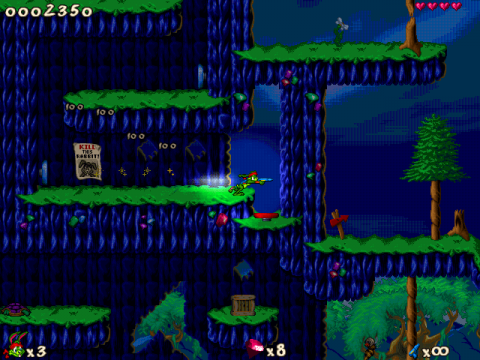 There are nine weapons in total in Jazz Jackrabbit 2 compared to the original’s five, although just like the original game, they’re very situational. All the weapons from the original Jazz are back, although the Toaster is more of a standard flamethrower, and the TNT works more like a mine. Some weapons, like the toaster and homing missles, work great on enemies that fly around just out of the reach of your shots. Some of the other weapons, however, like the pellet gun, are near useless. Just like the original Jazz, your standard blaster will be all you’ll need to use for about 80% of the game. The random food items you collect now also have a use, as collecting a certain number of them will activate a “Sugar Rush”, which is basically 20 seconds of reptile-murdering invincibility backed by a techno beat.

The resolution is double of the original game, and all the game statistics were moved to the corners of the screen instead of bunching them all up at the bottom. This makes it a whole lot easier to see where you’re going, so you’re a little more free to speed through the levels without bumping into an enemy. While the increase in resolution is a big improvement, it does help contribute to Jazz 2‘s biggest problem. While its predecessor felt a little too hard at times, the sequel has the opposite problem entirely.

Everything about the game feels like it’s been tuned to be as easy as possible. Enemies die in about three to five shots or less, and extra lives and health are incredibly common. There’s never any real pressure when you’re platforming, since the game doesn’t have any pits, or anything else that does more than one heart of damage.

The only time the game starts actually getting difficult is around the third episode, when it starts overusing small, flying enemies that fly just out of range of most of your weapons. A few of the bosses are also moderately challenging, although that’s more because you’re in a cramped area than anything they do. The fact that Epic took whatever complaints they had about the original game’s difficulty to heart is nice, but they really overdid it here. 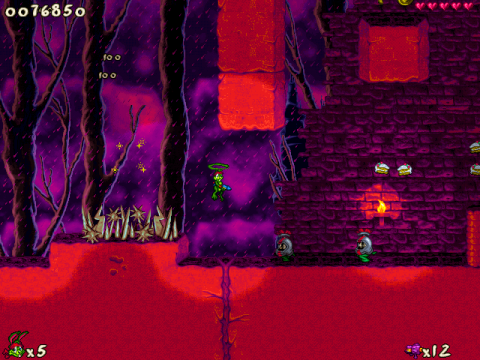 Something about the level design doesn’t feel quite as polished here, either, although it’s not especially bad. The original game tended to have a lot of unique gimmicks to mix things up, and there’s not as much of that in Jazz 2. You still have big bodies of water to swim through and hoverboards to fly on, along with a valiant attempt at making a Sonic-style pinball level. There’s also quite a lot of secrets to look out for, including a lot of silly developer in-jokes. But other than that, a lot of the levels feel like they’re more pretty to look at then they are to play.

The single-player campaign runs a bit shorter than the original game’s, clocking in at only 4 episodes for a total of 24 levels. Unlike Jazz 1, you have to unlock each episode in order before you can play them, although you can start a new game from any episode once you’ve unlocked it. Each episode follows the same structure as the first game, with three worlds with two stages each, although some episodes will have more than one boss fight. The third episode is actually a revisit of the third three episodes in the original game, and seeing them all redone in the new engine is pretty cool.

Aside from the single player mode, however, what’s unusual about Jazz 2 is the fact that it has a surprisingly sophisticated multiplayer mode, more like something you’d see in your average FPS than a 2D platformer. You can either play online, or split-screen with up to four players, the latter of which doesn’t work very well in practice, considering how difficult crowding around a keyboard is.

Along with a mode for doing the single-player campaign in co-op, there are modes for deathmatch, racing, capture the flag, along with a mode called Treasure Hunt, which is where players collect a certain number of gems and race for the exit before the other players do. Unfortunately, the game’s age means you’re not too likely to find many people still on the servers, if any still exist. The game does come with a level editor, however, and there’s quite a number of custom levels across the internet, so if you end up beating the main game, there are still plenty of levels of varying quality to play through. 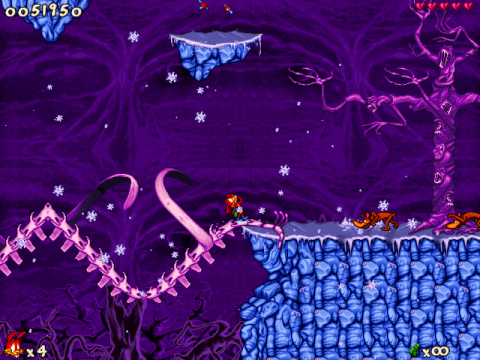 While Jazz 2 isn’t quite as good looking as a game like say, Rayman, it’s still a pretty great looking game, especially compared to the original. The levels look quite nice, if a little too static, and use Unreal-style skyboxes and dynamic lighting, which was pretty fancy for 1998. All the characters have a hand-drawn look to them, which fits pretty well with the game’s cartoony vibe. The music was done by Alexander Brandon, the same composer of Deus Ex and Unreal, and this game’s soundtrack sounds a lot like those games, if a bit “cartoonier”. This game also has a particularly metal boss track, although it’s not used very often compared to the other boss song.

Jazz Jackrabbit 2 definitely isn’t a bad game, something about it just doesn’t feel quite as polished as its prequel. Maybe it’s the lack of challenge, or the fact that the game’s new features don’t change up the gameplay as much as they should. It’s still a game worth playing, and it’s fun while it’s lasts, it just doesn’t quite match up to the original DOS classic. 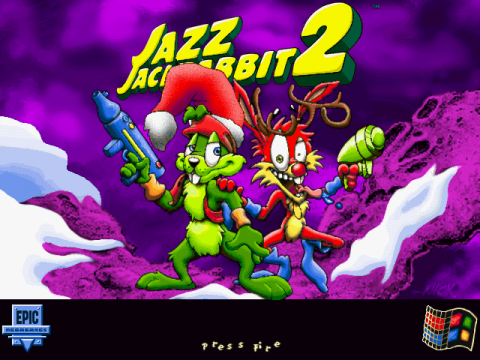 Since the original Jazz Jackrabbit had a special Christmas edition, it makes sense for its sequel to have one, too. HH98 follows the same tradition of the episodes before it, giving three new levels set in a snowy landscape to play through, with all the enemies given Santa hats where appropriate. And as always, there’s a great new Christmas-y track to listen to while you’re blowing you’re way through the levels. Oddly enough, the boss at the end of the third level is way, way tougher than anything found in the actual game, since he likes to throw homing fireballs that’ll take away two of your five hits. The game also comes the levels from the Jazz 2 level, which use tilesets from the full version but have brand new layouts. 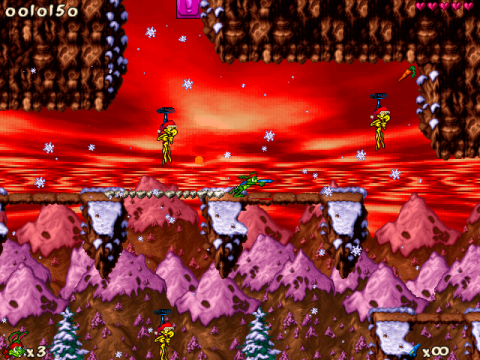 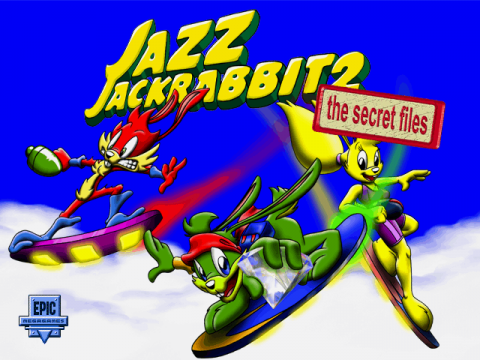 It’s a pretty weird decision to release an expansion pack to Jazz Jackrabbit 2 three years after its release, but here we are. The Secret Files is basically just a level pack with three new worlds, including a candy-filled Easter land, a haunted mansion, and a city. There’s a lot of nice new level art, if that interests you, along with some new music that sounds pretty good.

The biggest change is that they’ve added in a new character named Lori, who’s supposedly Jazz’s sister. She uses Jazz’s helicopter ears to glide, as well as Spaz’s flying kick to break through horizontal obstacles. The problem is that she has no way of getting vertical altitude like Jazz and Spaz do, so she has to miss out on a lot of secrets that they can get to just fine. Not only that, but if you put her into the original Jazz 2 levels, there’s no way to actually beat the game with her, since there are so many jumps she just can’t make. 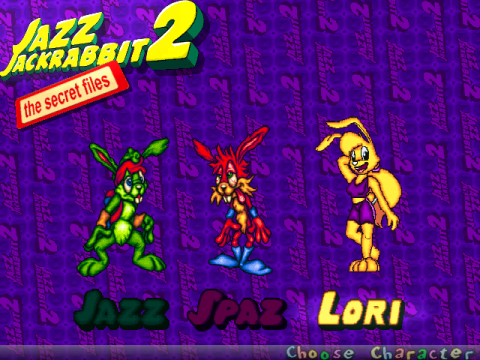 The new levels themselves are decent, if a little boring. The problem is that a lot of them require precision platforming, which just doesn’t work with how slippery the controls tend to be. It’s more annoying than it is actually difficult, but it makes getting through all nine levels a real pain. You don’t even get an ending for clearing every level, either, you just get kicked to the high scores.

If you really, really need more levels for Jazz Jackrabbit 2, go ahead and pick this up. But don’t bother getting it for the new character. Secret Files was only released in Europe, and it would probably be pretty hard to get a physical copy of it nowadays. A Jazz Jackrabbit game called Christmas Chronicles also exists, but all it is Holiday Hare ’98 with the addition of Lori. The core game and its expansions are bundled together downloadable at Good Old Games.