During the mid to late nineties, 3D fighting games were the genre du jour. At best, their slick presentation and smooth gameplay were perfect for showcasing the latest hardware and shifting units. With Namco’s Tekken series in particular enjoying incredible success, many publishers raced to come up with their competing fighting game brands. The results varied wildly, but the genre maintained its popularity for a fairly long time.

This was the climate that allowed fundamentally lackluster games like Battle Arena Toshinden to get three numbered sequels. Most of the titles in this influx of new 3D fighting games were bland and forgettable. Some of them had strange and interesting ideas despite being bland and forgettable. Maybe the mechanics of the relatively young genre were not yet set in stone; maybe inexperienced game developers simply didn’t know any better.

Polygon Magic is a Japanese game developer that is mostly known for the story-driven minigame collection Incredible Crisis and the psychic cyberpunk adventure Galerians. In 1996, they began producing fighting games for the Sony PlayStation.

At first, Fighters’ Impact comes across as thoroughly boring. The title is insanely generic. The character roster consists almost entirely of cliched fighting game archetypes. The game is essentially plotless.

Even though the game is light on the narrative, the arcade version’s flyer has some Engrish storyline information: a vengeful blind fighter called Barazock is out to annihilate the entire martial arts community, so eight fighters duke it out among themselves for the privilege of taking on him and his crew of sub-bosses.

Occupation: Pharmacist
Main Style: Bagauzhang
Sub Styles: Karate, Street Fighting
The hot-blooded young kung fu guy with ridiculous hair. He studied martial arts under the same master as Barazock, and is presumably out for honor and justice and all that.

Occupation: Student
Main Style: Daito-ryu aiki-jujutsu
Sub Styles: Taekwondo, Baguazhang
The traditionally Japanese fighter girl. She was taught martial arts by her father, who has now been kidnapped by Barazock.

Occupation: International Terrorist
Main Style: Karate
Sub Styles: Baguazhang, Daito-ryu aikijujutsu
The laid-back old guy with a giant quiff. Although he looks kind, he’s actually the professional killer who messed up Barazock’s eyes back in the day. He has been hired to finish the job and take him out for good.

Occupation: Professional Wrestler
Main Style: Wrestling
Sub Styles: Street Fighting, Taekwondo
The big black man with borderline offensive cherry red lips. His brother is being held hostage, which is starting to seem like a fairly common theme in the game.

Occupation: Unknown
Main Style: Beastly Attack
Sub Styles: None
The sewer-dwelling subhuman mutant. He wants to take revenge on Barazock for kicking him out of his gang.

Style: Wrestling
One of the sub-bosses. A bizarre fat man who’s slathered in body paint. His wrestling moveset is actually different from the main characters.

Style: Karate
Another sub-boss. An aristocratic man who, like Hoihoi, fights with his own style of karate.

Style: Baguazhang
Probably the most irritating sub-boss. Her personal style of baguazhang is characterized by constant and automatic sidesteps, which makes her hard to hit and gives her plenty of opportunities to punish you from the rear. Apparently one of the most basic forms of baguazhang is called circle walking, so her fighting style might be accurate. Probably named after Bollywood film director and choreographer Farah Khan.

Style: Illusion
Also a sub-boss. He makes his opponent fight a mirror version of themselves in a psychedelic dreamscape and doesn’t actually have any moves of his own. He’s the only character that isn’t playable for that reason.

Style: Synthetic Skill
The final boss of the game. After Bernhard took his eyesight, he developed an insane hatred of all martial artists. Killing and kidnapping their loved ones is probably just his way of coping with it. His unique fighting style allows him to copy his enemy’s moves as he gets hit with them. For whatever reason, he’s named after Japan’s first gay lifestyle magazine, Barazoku. 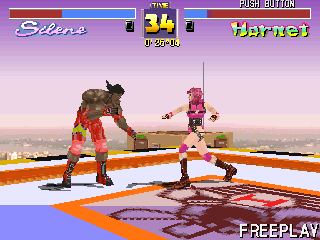 Despite first impressions, Fighters’ Impact actually has some pretty innovative gameplay. The definite main attraction of the game is the so-called “motion slide combo” system, which gives players the freedom to come up with their own combos. Technically, any move can be cancelled into any other move. However, using the same move twice within a combo string will cause your character to “overheat”, leaving them momentarily unable to attack. Furthermore, getting hit while in the heat state will stun your character and leave them open for further attacks. The system simultaneously allows newcomers to play an effective offensive game, penalizes button mashing and enables all kinds of high-level combos. After the fighting game craze eventually dwindled, developers have been working hard at striking a balance between depth and accessibility. In retrospect, the combo system in Fighters’ Impact is nearly ingenious.

Random strokes of brilliance aside, there are a few gameplay issues. Notably enough, throws cannot be escaped. The throws in the game have no lead-in animations, so they pretty much happen instantly and thus can’t be countered with a quick jab or otherwise avoided. The ground game is also limited with only a couple of rising attacks from the prone position and no evasive rolls whatsoever.

The control scheme is similar to Virtua Fighter‘s, with only three buttons: punch, kick and evade. The evade button can be used to perform sidesteps and other maneuvers in conjunction with the directional buttons. Furthermore, performing a sidestep right before an enemy attack connects also functions as a simple parry technique. This gives the combo-heavy game some welcome defensive options. 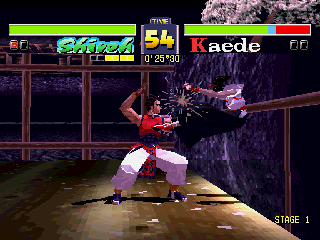 For better or for worse, Fighters’ Impact looks and sounds exactly like a mid-’90s 3D fighting game. It’s entirely acceptable for 1996, with its somewhat blocky and well-animated character models and flat arenas. The music was composed by Yasuhisa Watanabe from Taito’s Zuntata team. It’s competent and beautifully moody at times, but not necessarily memorable.

The arcade version runs on Taito’s FX-1 platform, which is more or less comparable to the PlayStation hardware (even the slight graphical differences in the comparison shots are probably due to emulation issues). As a result, the differences between the arcade and home versions of the game are negligible – the PlayStation version’s intro has been converted to an FMV and the in-engine cutscene of the first sub-boss appearing has been replaced with a loading screen, but they are otherwise very similar. Neither version of the game has proper endings apart from credits and a game over screen. The PlayStation version does have a few extra features, such as the option to turn the overheat penalty off or the wackily named Combo de Mambo mode, which allows you to practice and record combos.

Despite some niggling issues, Fighters’ Impact is a fundamentally solid and genuinely playable game. Unfortunately, Polygon Magic’s following efforts to build on the game’s strengths were not as successful. The game technically was not released in Japan, but a heavily altered version was published in North America by THQ under the name Vs. 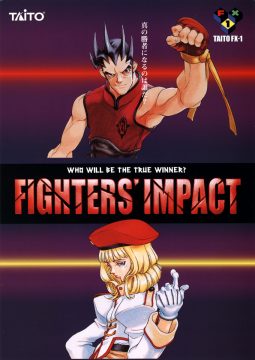 Fighters’ Impact was apparently popular enough to warrant an arcade-only update. The character roster is the same as before, though the bosses are now unlocked right away and Dr. Wiz has become playable. He’s still just a copycat character without any moves of his own, though. The character textures have also been recolored in a lazy attempt to give the game a fresh look – other than that, the game looks exactly the same. Once again, the lack of proper lighting in the screenshots is only due to inaccurate emulation of the game’s arcade board.

The A revision consists mostly of gameplay tweaks. Throws can now be escaped, along with missed throws having a new whiff animation. The ground game has also been expanded with proper evasive rolls. There’s a new counter-attack from the blocking position, similar to the Alpha Counter in the Street Fighter Alpha series. Interrupting the opponent’s attack with a slower power move will now cause knockdown and extra damage.

However, the most dramatic modification is the complete removal of the custom combo system, heat status and all. The game now has preset combos, along the lines of Tekken, Virtua Fighter or practically every 3D fighting game ever. Ultimately, Fighters’ Impact A takes a few welcome steps forward but ditches the one thing that actually made the first version interesting. 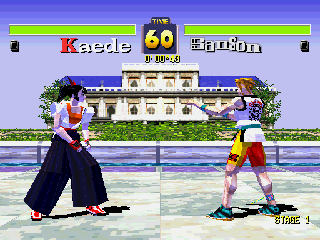 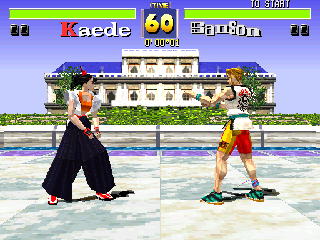 King of Fighters ’96, The
Night mode