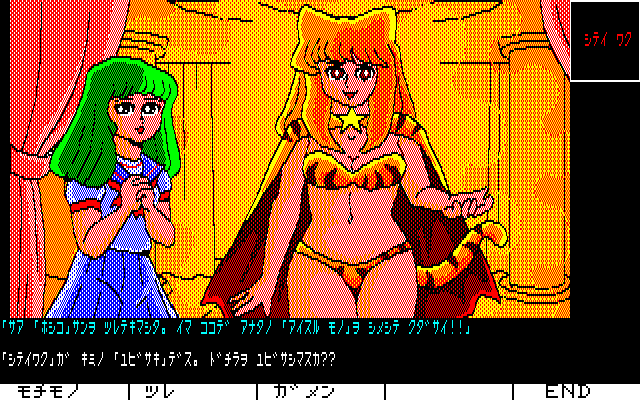 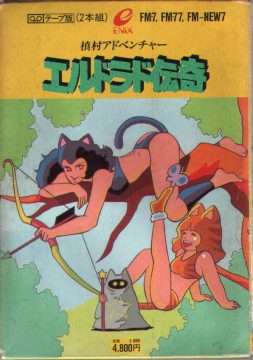 Many early text adventures sent you to exotic locations, to explore the pyramids or Egypt or South America and uncover the secrets of lost civilizations. El Dorado Denki (“El Dorado Romance”), published by Enix, follows along that line, also adding in a healthy dose of naked cat girls. The game was designed by manga artist Tadashi Makimura, also known as Doronpa, as part of a programming contest held by Enix. He had also created Mari-chan’s Kiki Ippatsu, a somewhat more openly lascivious title, a couple years before. 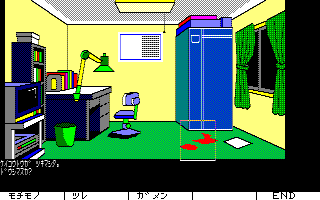 The story pointlessly starts with a frame story regarding your friend Akira, who calls you up in the middle of the night and beckons you to come over. You find him dead in his closet, and upon piecing together bits of clues in a computer program he was working on, discover that his sister has been kidnapped, causing you to follow the trail to El Dorado in South America. The indigineous creatures here are “Amazonekos” (“Amazon cats”, roughly); some tribes are friendly, some aren’t. The ultimate goal is to find a piece of a golden statue as well as stars tattooed on the bodies of the various ladies. Said tattoo stars are also always located on a place that requires them to doff their clothes. Despite its pervertedness, it’s not nearly as rapey as it sounds, for the most part – you do spy on a few who are tied up, although one is already naked and about to be sacrified, and another you tie up because she is trying to kill you. The nudity is abundant, but it’s largely handled in a playful manner, and it’s not really an eroge, since the goal isn’t really to bed them either. Overall, the visuals are quite excellent for a PC game from 1985, with brightly color backgrounds, cartoonish beasts and attractive ladies, though the art style alternates between realistic and super deformed.

The interface is a halfway point between a fully text-based parser and a command menu. There are a dozen verbs listed on the side of screen – select one, and then you use the function keys to determine if you’d like to act on your inventory, one of your partners, or the screen. The screen is divided into an invisible grid, then allowing you to highlight what you’d like to interact with using a cursor. It’s a good concept, but functionally it’s entirely too cumbersome – having to use the function keys constantly is a pain, and the cursor moves incredibly slowly and is often unresponsive, due to the game being programmed in low-level BASIC. It’s also inconsistent, because while it sidesteps text entry for the most part, there are a few areas where you need to type in responses or phrases. 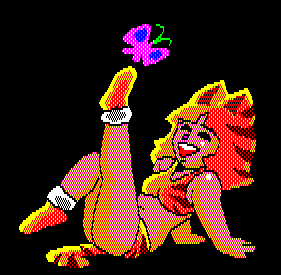 It’s not a terribly well designed game either. Most of the puzzles are standard – dig up stuff with shovels, shoot things with bows and arrows – although occasionally progress is impeded unless you ask one of your companions what you should be doing. There are also a few tile puzzles where you need to reassemble a picture, although these aren’t so much difficult as tedious. The aggravating part is that the game is distressingly linear, to the point where you’re usually contained between one or two screens. There is no proper save system, and instead the game gives passwords to let you resume progress, forcing you to restart the whole chapter if you’ve missed a vital item and gotten stuck. So although it falls victim to various early technological and design flaws, the premise and the cutesy characters are enough to distinguish itself, that it remains recognized amongst Japanese retro PC enthusiasts.