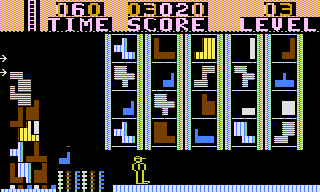 Highrise sure does look like a long lost sibling of Tetris. In practice it does play quite differently, but it still appears like some kind of lost antecedent of the “falling blocks” puzzle genre – publisher MicroLab (“MicroLearn” apparently was just a label to emphasize the educational value of the game) started advertising and selling it around September 1983, almost a year before Alexey Pajitnov made his groundbreaking invention, and several years before Tetris finally caught on in the West.

Like most early puzzle video games (aside from those that were adaptions of traditional puzzles) such as Sokoban, Atari Video Cube or Burger Time, Highrise relies on a realized player avatar to communicate its concept. Here it’s Barnaby, the master builder, who has to build towers that can support him to climb up to a ladder at the top of the screen, which takes him to the next stage. Even though the game’s marketing tried to push the “urban” appeal in reference to modern cityscapes borrowed from the punny title, what Barnaby is building does in no way have to resemble a building someone could actually live in. It’s merely for the purpose of gettin up, and it’s all kept very abstract. Where is Barnaby going? What purpose does his journey upwards have? Where are the building blocks coming from? None of these questions are ever a concern.

At least the building blocks come quite visible from five chutes, which offer a wide range of choice and a reasonable peek into the future, as the next four blocks from each chute are always on screen. The player has to grab these blocks and place them on a set of springs to the left. The building area and springboard are six units wide each, and it’s possible to place more than one block at once before catapulting them onto the empty field to the far left, where they always appear in perfect order as they were placed on the bumpers. 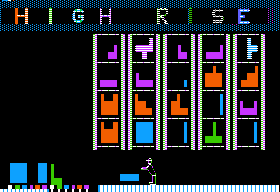 The blocks come in many different shapes and sizes, though, and once Barnaby is forced to create an uneven tower, things become tricky. Unlike Tetris, the aim is not necessarily to build flawless rows with no empty spaces in between, but each row has to support what is placed on top of it. So it’s perfectly OK to place a three spaces wide block on a row with a small gap in the middle, as long as the left and right ends stand on solid grounds. This is very easy in the first stage, where all blocks are rectangular, but becomes exceedingly difficult as more messed-up shapes are introduced. If there is only one weak spot in the structure, it all comes crumbling down, forcing Barnaby to start all over again.

Barnaby cannot slack around, either, as each stage comes with a time limit. Action is never quite as urgent as in proper falling blocks games, but the limit becomes strict very fast, especially since it doesn’t get reset after a collapse of the tower. It doesn’t matter how often Barnaby fails, but if the timer runs out just once, the game is over.

Maybe the difficulty curve in Highrise is a bit steep for the game to have become an instant classic. The large variety of different shapes demands the player to adapt to new strategies with almost every new stage. It’s also not always easy to intuitively determine which constructs will hold and which won’t, and resetting the entire stage for a single mistake isn’t too user-friendly. The inability to turn around blocks can also be infuriating for Tetris-conditioned minds. In addition each tower from stage 5 onwards starts out with some inconveniently placed blocks already in place, and even later challenges take chutes away, until there is only one left. The game at least offers an “instructor mode” – the only other mode available next to default play – which allows practicing the game at leisure without timer or score. 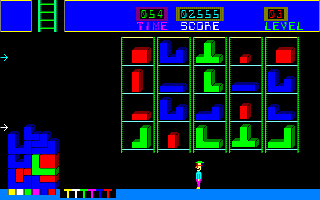 Highrise was published across the trinity of the big US 8-bit computers; the Apple II, Atari 800 and Commodore 64. (A version for IBM PCs was also advertised, but it seems that never made it.) The Atari 8-bit version makes heavy use of exploiting NTSC artifacting for colors. Most emulators have options to simulate the effect, but without it (say, on a modern monitor or a PAL system) the game is unusually difficult to play because hatchings and similar patterns become the only means to distinguish different types of blocks instead of the color coding, which simply doesn’t parse as well. The other two versions look quite similar, aside from the Commodore’s higher resolution and color palette. Through Comptiq, the game also made it to Japan, where it was ported to the FM-7 and PC-88 between late 1984 and early 1985. On the PC-88, Barnaby for some reason looks like a nerd with super huge glasses. The blocks are drawn from a slightly angular perspective and connect directly, which makes them look even more like Tetris (which at this point was still not well known). The FM-7 doesn’t have the slick angular viewpoint, but in turn Barnaby looks like a proper construction worker.

It seems Highrise came and went without much of a reaction from critics, audience or other developers – an opportunity tragically missed. With a few more playing options, more transparency about the physics and a longer entry level phase, the game could have become just as addictive as Sokoban or Tetris. Being published by a little known software house with minimal marketing certainly didn’t help, either. The name Joe Calabrese hasn’t ever been sighted in another video game’s credits ever since, and even though MicroLab got to publish early versions of the runaway success Boulder Dash under the MicroFun label, the company seems to have vanished not long after that. If someone had remembered the game and knew how the rights to it could be obtained, the concept no doubt would have resurfaced among the Tetris craze in the late 1980s, preferably with snappy “we did it first” advertisement byline. But even that wasn’t to be, and thus one just sank into oblivion, while the other has forever secured its place as one of the decisive achievements in video game history. It’s a sad story, but that’s how things work… 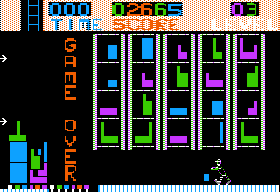 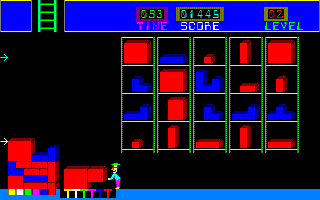