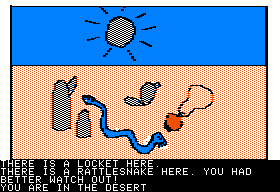 Wizard and the Princess is the second text adventure developed by Online Systems, after Mystery House. As the documentation relates, Princess Priscilla of the land of Serenia has been captured by the evil wizard Harlin. Her father, King George, offers half the kingdom to any soul who can bring her back alive. That soul just happens to be you. It is not technically part of the King’s Quest series, even though some games in the series reference its in-game locale of Serenia, but it definitely laid the path for the later games.

The text parser is roughly the same quality as Mystery House, which is to say, not very good. It can only understand two word sentences (“VERB NOUN”), the writing is terse, and it rarely understands what you type in anyway. It does improve on Mystery House’s simple black and white graphics by adding a bit of color. The Apple II didn’t have great display capabilities, so the color is quite limited and usually relegated to background objects, although it uses a fair bit of dithering to give objects some texture. The IBM PC and Atari versions look similar, albeit with somewhat worse colors, and the Commodore 64 version probably looks the best of the bunch, as it gets rid of the dithering entirely and makes better use of color. 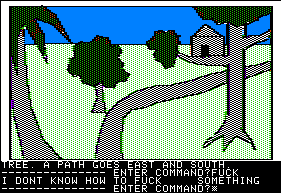 The land of Serenia is fairly large, and the whole game is basically one giant maze. Nearly all of the screens look alike until you stumble upon a major destination. And since your character can and will die of thirst, you can’t wander too far unless you refill your flask at a waterbed. You’ll wander through deserts and forests, sail across the waters, and eventually find your way into Harlin’s castle. Most of the roadblocks involve various animals or fairy tale creatures, including gnomes and giants. The opening segment has a strange love/hate relationship with snakes – your first goal is to kill one by smashing it with a rock, then you need to drive away a second by waving a stick at it. Then you come across third snake, pinned beneath a rock. Save him and it turns out he’s the king of the snakes, and will tell you a magic word out of gratitude in spite of the nastiness you inflicted on his subjects moments before.

The IBM PC version is known as Adventures in Serenia. Although the documentation claims that the game is a sequel, it’s exactly the same game. Taking place in the future, long after Harlin’s defeat, he claims that he cannot be beaten twice and so turns back time, as another adventurer is forced to relive the quests of old. 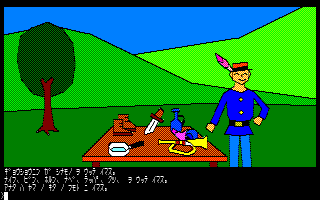 As with Mystery House, Wizard and the Princess was licensed by Starcraft and released in Japan for the PC88, PC98, and FM-7 computers. These versions have substantially improved visuals which go beyond the somewhat goofy, childish drawings of the original versions, owing to both better development tools and the higher resolution displays of Japanese PCs. 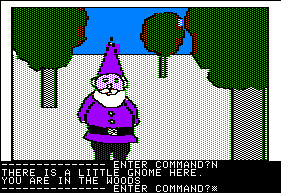 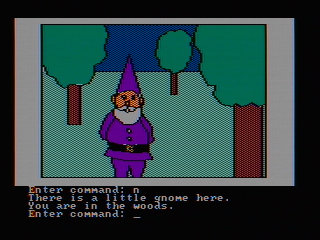 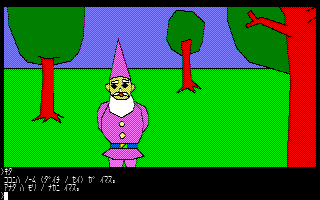 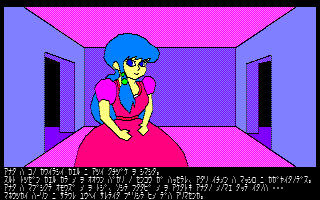