Tecmo has really made a name for themselves over the time they’ve been in the gaming world, and that’s been actually quite a long time. During the 80s, they were most beloved for the legendary Ninja Gaiden series and Tecmo Super Bowl. Lesser known but still rather popular Tecmo classics include the innovative action-puzzler Solomon’s Key, the jumping madness of Mighty Bomb Jack, and the story of a Greek/Roman warrior armed only with a large razor-sharp yo-yo, determined to defend his land from whatever gruesome creatures may assault it. And his name… was Rygar! 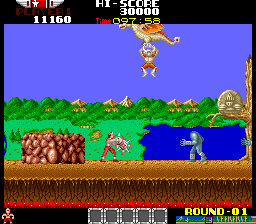 It’s hard to tell exactly who or what Rygar is named after, but it is a pretty cool name regardless. The young warrior fights for the safety and prevalence of Argool, his admittedly beautiful land. It has been invaded by mysterious beasts and vile creatures made of pure hatred and darkness, so our hero clutches his patented Diskarmor in his hand and sets out for much action and adventure. The Diskarmor is certainly a unique weapon with an appropriate name, as it is a bladed disk that can also be used to defend attacks like a piece of armor, hence the name. The hero is able to throw his weapon out on a rope and swing it around, effortlessly shredding any and all baddies in his way. He doesn’t really have any other offensive tools in his inventory, but with a weapon as cool as the Diskarmor, what else would you need?

Rygar‘s legacy has spanned three completely different games, the first one being an okay arcade platformer with lots of levels, the next one regarded as one of the better NES games of its time for combining action and adventure with RPG elements, and the third one as a breathtaking masterpiece that gives Devil May Cry a run for its money as one of the best modern action-adventure titles of the early PlayStation 2 era. 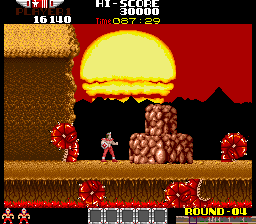 Rygar’s first adventure was released in the arcades, thus heralding the debut of a new hero. The thought on everybody’s minds was, “Step aside, Mario. That Diskarmor is more dangerous than any barrel or terrapin you’ll ever face.” Or at least, that’s what gamers would be thinking if Rygar received more public exposure. The original arcade title is little-known, and most gamers at the time probably though the first Rygar game was the NES title.

After a credit is inserted and the start button is pressed, there’s a bit of text about how the world fell into darkness, evil forces, billions of years, blah blah blah, and so forth.  Rygar is thrust into a pretty decent looking wilderness area where headless demons and evil caterpillars are out for his blood. Pressing the attack button thrusts the Diskarmor straight forth, and holding up on the joystick swings it above Rygar’s head in a backwards arc. Jumping onto enemies doesn’t harm Rygar, and it stuns enemies for a second. 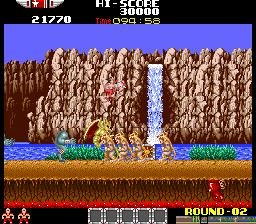 The graphics are okay; nothing highly spectacular for the time, but they’re certainly adequate. The colors are a bit drab, but they’re used well, and are never unpleasant. The backgrounds and foregrounds are pretty detailed, and there aren’t many parallax layers, but the background does move independently as the rest of the screen scrolls, which is nice. There’s this little map screen in the lower-right corner of the screen, which is pretty much worthless as the stages are entirely linear anyway. There are 27 levels in total, and as one might guess, they get repetitive, both visually and structurally, as the game wears on.

The sound is in the exact same boat as the graphics are. It’s definitely not outstanding in any sense of the word. The sound effects are fairly audible, even though there aren’t a lot of them. Rygar makes shouts as he jumps and attacks, and let’s out a nice “AAAAHHHHH” when he dies. As for the music… well, it’s really only one tune, and it’s not very loud or imposing. 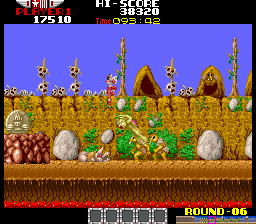 There’s not much to the action. Just stay alive, killing enemies if necessary, and get to the end of the stage. There will be items to help our hero, but most of them are just worth points. There’s actually a super secret item hidden in round 13 that will grant you a million points (hint: look for the Big Dipper). But there are others that cause all enemies on-screen to explode, add more time to the clock, make you invincible, and of course, give you a bonus life. There are also four special items that can be held onto as long as Rygar doesn’t die. They extend the Diskarmor range, allow it to kill several enemies in one shot, have Rygar kill enemies by jumping on them instead of merely stunning them, and make the Diskarmor easier to control in mid-air. During each intermission between stages, Rygar finds himself in a room with what seems to be a statue of some sort of deity, which denotes what to expect in the forthcoming level. For example, the muscleman in a speedo and holding a large shiny object clues into the appearance of explosion items. A large winged guy clues the existence of a bonus life in the upcoming stage, which isn’t much of a surprise as small winged men are the icon for 1-ups! 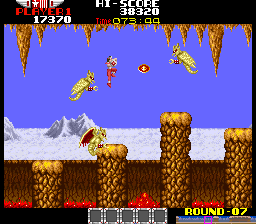 It would be nice to have boots of spiked steel and a Diskarmor on steroids all the time, but the game is hugely challenging. There are two factors that jack up the difficulty to a high degree; the overwhelming amount of enemies that the game throws at you, and the fact that our seemingly strong hero can only take one single hit. Unless he jumps on an enemy or he’s not under the influence of the invincible Cross item, he loses a life. Now, all the constant dyings and the goofy lookin’ Grim Reaper that whisks Rygar away would be tolerable if there was a good motivation to get to the end… but there isn’t much to play on for, really. This was 1986, a time where action games didn’t place much emphasis on the bosses, and the only unique major enemy is this large lion guy who doesn’t really do much but jump around. He’s at the end of Round 27, and beating him nets you a crappy non-ending. This is typical stuff for the time, but it somehow grows monotonous after extended play, which adds up to frustration when coupled with the constant amount of credits you’ll have to plug into the machine.

But even more frustrating, if you die on the last level, that’s it. Game over. You can either start from the beginning or walk away from the machine in anger. Rygar stops you from continuing about three quarters of the way through. And you still have several more levels to go afterward. 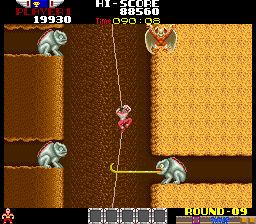 Rygar‘s introduction into the gaming world is a bit repetitive: it becomes bland after a while, and all the constant death on the player’s part is liable to bring his or her fist straight through the screen. It’s certainly not extraordinary or groundbreaking, but everybody’s gotta start somewhere. Ninja Gaiden and Bionic Commando both got their start in the arcades, and those games were just okay, but both series moved to the NES and they became legends. Rygar is in the very same boat here. However, the arcade title is good for what it is; a standard action game with a fun weapon that is enjoyable in small doses. 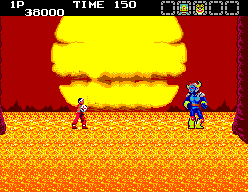 Outside of the NES game, all of the other ports pattern themselves after the arcade game. The Sega Master System/Mark III version of Rygar only came out in Japan. For some reason, it was named Argus no Juujiken (“Cross-Sword of Argus”) as opposed to the arcade game, Argus no Senshi (“Warrior of Argus”). This port was done by a team called Sario, which is believed to be a shadow development team under Tecmo, since they technically weren’t allowed to be working for competitors due to their license with Nintendo. 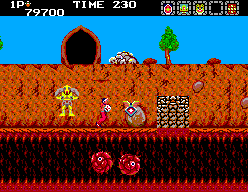 While the gameplay and general level structure are pretty similar, it’s pretty stripped down overall – most of the backgrounds are gone, and the scenery is much more repetitive than the arcade game. The 27 short stages have been reconstructed into 5 long stages. Some stages have underground tunnels similar to Pitfall that you can enter, but there’s rarely any point. The urns at the end of each level are gone, although there are now boss monsters that you face every couple scenes. For a Sega Master System game, it’s fairly decent, though hardly remarkable.

Rygar also got ported to the Spectrum, Amstrad CPC and Commodore 64, but like most computer ports, all were pretty bad. To contrast, the X68000 version, released as Video Game Anthology Vol. 9, is basically arcade perfect.

As far as ports available to Americans, the most faithful was, oddly enough, the Atari Lynx version. While the proportions got incredibly screwed up in the trip to the handheld, most gameplay transferred over fine. Of the few problems – you can’t attack upward, and there isn’t a continue option, making this a valid option for the hardcore only. There was also a version for mobile phones in Japan.

Otherwise, arcade perfect versions are available on the Tecmo Classic Arcade for the Xbox, on the Wii Virtual Console, and as part of the Arcade Archives on the PlayStation 4. 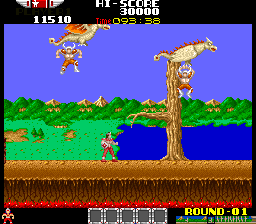 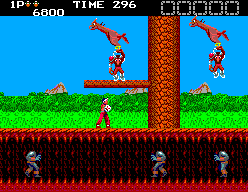 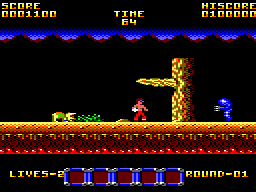 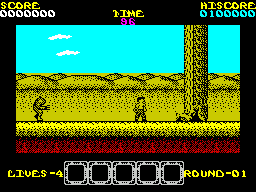