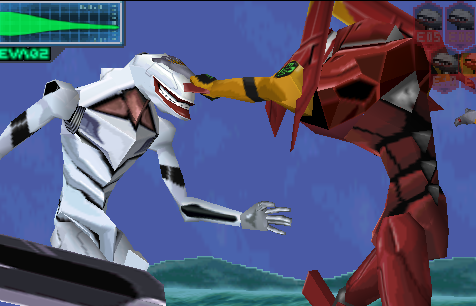 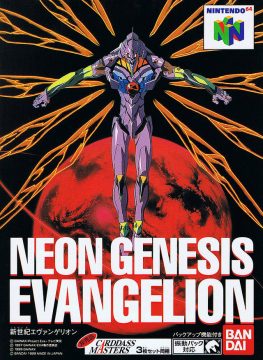 If you asked an anime fan what the best anime from the 1990s was, you’d probably get Cowboy Bebop as your answer. If you asked again, Dragon Ball Z would also be a likely candidate. And then maybe Sailor Moon. But somewhere in that list would be Neon Genesis Evangelion, a show with high critical acclaim and a divisive fanbase. It was one of the most financially successful anime shows of the 1990s, so it’s no surprise that it spawned so many games at the height of its popularity. 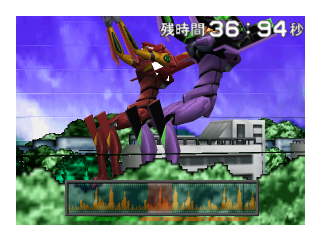 One of the more notable entries was the eponymously named Neon Genesis Evangelion, released by Bandai Games for the Nintendo 64. Covering the events of the show and the movie (End of Evangelion), it made extensive use of voice and video clips from the show, setting it apart from virtually every other N64 game at the time. Unfortunately, that’s all the game had going for it. Given the quality of licensed titles at the time, it should be no surprise that this game wasn’t particularly good.

For those not familiar with the series, Neon Genesis Evangelion is a mecha anime set in the year 2015. Alien creatures called Angels have wiped out over half of mankind in an event known as Second Impact, and an organization called NERV works to prevent Third Impact from happening. They do so by making these three high school students pilot giant robots known as EVAs:

Shinji is probably the closest the series has to a single protagonist. He’s best described as a regular teenager who’s forced to deal with increasingly stressful situations as a result of piloting an EVA unit.

The first pilot of a successful EVA unit. Rei Ayanami is a character with hardly any presence. She hardly emotes and doesn’t have much of a personality. Despite this, she’s proven to be one of the series’ most popular characters.

The last major EVA pilot introduced in the show. (A few others come, but only very briefly.) Unlike Rei, Asuka holds a very strong presence in the show. She’s driven to succeed and act at all costs, but she’s also highly emotional. In fact, she’s usually angry with anybody in her near vicinity.

And managing NERV are:

The commander of NERV, and Shinji’s father. Like Asuka, he’s willing to do anything to get the job done eliminating the Angel threat. But unlike her, he’s perfectly willing to manipulate and disregard others to achieve those goals. Needless to say, Shinji’s relationship with him is heavily strained.

The operations director at NERV, she manages the EVA pilots in battle. She also acts as Shinji’s guardian, and later, Asuka’s. Misato’s a boisterous character, but takes her work very seriously. She also owns a pet penguin named PenPen, although he isn’t seen in the game. 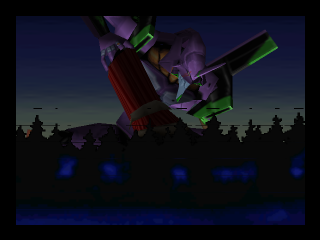 The N64 game was hardly the first Evangelion game, and it certainly wouldn’t be the last. What set it apart from other Evangelion games (and other games at the time) was its use of animated scenes from the show. This was the N64’s weak point, as its cartridges simply didn’t have enough room for high quality video until late in the system’s life cycle when developers had figured out strong compression algorithms and ROM prices allowed to use the highest cartridge size. Meanwhile, the PlayStation could boast loads of games like Mega Man X4 and many Square titles, and the Saturn had Radiant Silvergun and Sakura Taisen to its name. A popular franchise like Evangelion featuring so many voice clips and animated segments would have given the N64 a significant edge against the competition, especially in light of the then-recent Dreamcast.

Of course, this is assuming that the animated scenes were any good in the game, which sadly isn’t the case. The N64’s technical limitations shine through with this game. First, the compression in these scenes is not particularly good. But more importantly, very few of the scenes are truly animated. Most of them consist of a still image with basic animated elements (usually a talking mouth) layered on top. There are a few exceptions, but they’re few and far between. 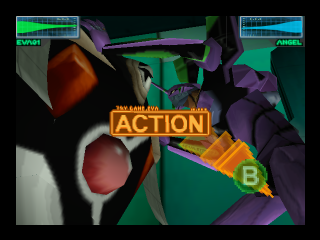 Of course, it’s easy to understand why the animated segments ended up like this: the N64 wasn’t designed to run high quality video like a disc-based system could. That the system could render these scenes from Evangelion is a legitimate technical achievement. That said, perhaps they weren’t the best way to show what the system was capable of, and they certainly weren’t the best way to appeal to Evangelion fans at the time. If anything, the 3D elements are much better at fulfilling those tasks. The EVA units’ angular, well-defined design translates well to a polygonal format, as do the Angels’ strange designs.

And on that note, the music quality varies wildly. Some tracks make the transition to MIDI format nicely, while others… don’t.

So, failing graphics, what else does this title have to its name? Variety. One of the selling points behind the Evangelion game was that it let you play through the show’s biggest moments, many of them represented with their own distinct gameplay style. Arael sees you piloting the Lance of Longinus directly into the Angel; Ramiel is taken down by lining up a shot while Rei defends you; and of course, Israfel gets its own DDR-esque sequence. (It’s also the only Angel you get to practice against ahead of time.) However, most Angels come in two varieties. Some Angel fights boil down to a continuous button prompt (almost always A+C-Down), but most of them are just a one on one fight. These Angel fights are almost like a very simple fighting game, with basic swipes/blocks, and limited use of grabs and AT Fields (protective barriers). 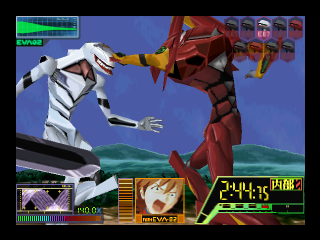 While these are by far the most frequent type of Angel fight in the game, they’re also one of Evangelion‘s weaker points. EVAs advance slowly and the controls are sluggish, with a noticeable delay between pressing a button and seeing your EVA unit follow through. It matches up well with how the EVA units are typically portrayed in other media, but here, it doesn’t translate to a fun game. At best, it’s mind numbingly slow and repetitive. This is especially in light of the lack of strategy in these battles, seeing how your only attack options are to move forward and claw away at the Angel, hoping it doesn’t knock you back with its own AT Field. Meanwhile the Angels themselves are more equipped to attack you, often having greater strength and a significantly wider range of attack.

And the other sections of the game don’t fare much better. Anything involving a button prompt is prohibitively strict (but only when an AT Field’s involved, for whatever strange reason), whereas the other segments are hit and miss. So, Neon Genesis Evangelion clearly isn’t the kind of game you play for its gameplay, and it’s doubtful that series fans would have bought into the “play through your favorite moments” selling point when doing so isn’t very fun. 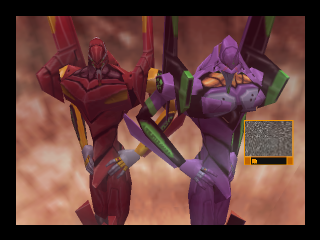 However, the N64 game still holds a notable place within the franchise, if only for how it interacts with the source material. This is by no means a faithful adaptation, which, to some extent, comes with the territory. Being based on a 26-episode anime, cuts to the source material were inevitable, and some of them were honestly for the better. Most notably, a few of the more boring Angels are excluded from the story mode (although some of them show up as targets in the shooting gallery mini-game).

But so much more of the differences simply come from this being a video game. For example, because the game focuses almost exclusively on Angel fights, the story moves at a much faster pace. It omits important elements like the EVA pilots’ school lives, Shinji and Asuka living with Misato (save the practice mode for Israfel), the origins of NERV, and any emotional impact that arises from these omissions.

Likewise, several of the Angel fights carry a much more positive tone than they did in the source material. Because this is a video game to be won, you see the pilots winning against whatever Angel they’re fighting. But the heavy psychological damage that the show frequently explored is either glossed over, obfuscated or omitted entirely. It feels like an entirely different experience, and not for the better. By focusing only on the Angel fights, the story the game depicts lacks a lot of the nuance and weight that made Evangelion stand out in the first place. 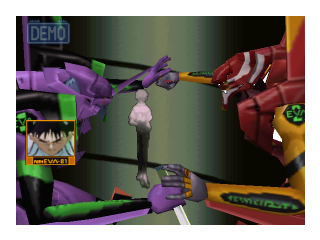 Let’s look at Sachiel (the first Angel Shinji fights) as a case study. In the show, there’s an entire episode’s worth of build-up to Shinji piloting the EVA against Sachiel. But when the time comes for him to fight, he fails miserably. He can barely get his EVA unit to walk, much less competently defend itself. The only reason he defeats Sachiel is because his EVA unit goes berserk and kills the Angel for him. In the game, though, he has no problems piloting his EVA unit. He can even defeat the Angel without relying on his EVA unit bailing him out. While the show wanted us to see just what a bad idea sending an inexperienced teen into battle would be, the game appears to forget this important detail. Later fights get similar treatments. The game even rewrites both controversial endings (the show’s and the movie’s) in favor of a considerably more controversial happy ending.

Fans often complained about the more dense, psychological portions of Evangelion, but this would hardly be a good solution. It’s a lose/lose situation, on the game’s part. To be good as a video game, it has to contradict many of the things that made Evangelion a worthwhile show in the first place. And it’s not like these design decisions serve non-fans looking to get into the series, given the quality of the underlying gameplay. 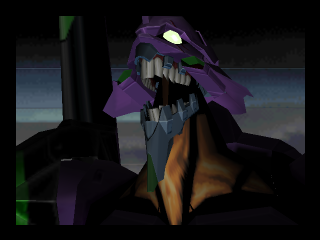 This being an import only game, sales data and general reception are hard to come by. But judging by the scant reviews available at the time, reception was generally poor. GameSpot’s review goes so far as to say, “What is clear is this: The biggest flaw with the Neon Genesis Evangelion game is the game itself.” And while many more Evangelion games would follow this one, we can hardly attribute this fact to the game’s own merits. In the end, the N64 Evangelion game is best remembered as a technical curiosity, and perhaps as a lesson in how to adapt existing franchises to video game form.